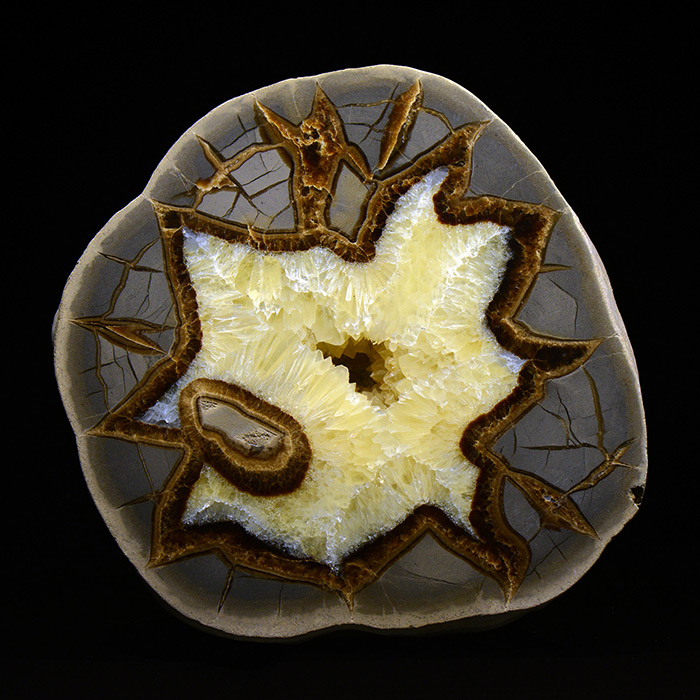 The meaning of septarian comes from the Latin 'septum' meaning 'a dividing partition between two tissues or cavities'.  In anatomy 'septum' is the cartilage in our nose that separates one nostril from the other.

Septarian stone correctly known as a septarian nodule or concretion is distinctive, takes on a high polish and is classed as a rock not a mineral.  Rocks are made up of different minerals whereas minerals are made up of crystals.

Septarian nodules are made up primarily of three different minerals.  The yellow centre is calcite, the brown lines are aragonite or siderite and the outer shell is limestone.  They're sometimes likened to a prehistoric mud ball because of the way they formed.

Although often known simply as septarian, it's more accurate to refer to these geological structures as a septarian nodule or concretion.  Both are quite similar hence the terms tend to be used interchangeably.

In geology a nodule refers to a small irregularly shaped mass or lump of crystals or particles with a contrasting composition.  That basically means they're not all the same and may even be separated from the formation in which they occurred.

A concretion is a self contained cemented body of sediment.  This word also comes from Latin meaning 'to grow together' or 'to harden'.

Despite being quite common concretions are often looked upon as being geological curiosities.  This is because of the many unusual shapes, sizes and compositions in which they occur. 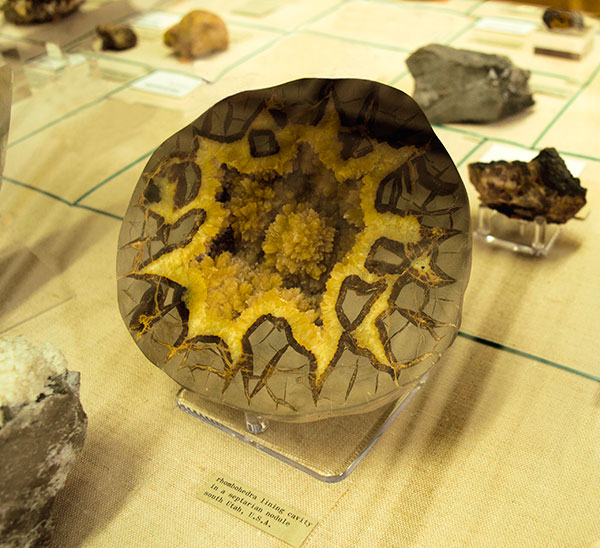 Septarian is known to have formed during the Cretaceous Period.  This time period began approximately one hundred and forty five million years ago and ended sixty six million years ago.  That's around the time the dinosaurs disappeared.

The septarian nodules (or concretions) formed beneath the water as minerals and organic matter accumulated around a centre mass.  Gradually over millions of years and with the help of various geological processes, the mass hardened and became cemented together to form a nodule.

Siltstone is fine grained silt, sand, clay or other materials carried in water before being deposited as sediment.

Septarian nodules may well have formed in shallow lakes as the tide caused an accumulated mass to roll gently back and forth.  Over time with the addition of new layers of sticky mud the size of the mass increased.  During the hot summer months as the water receded the mud dried out causing it to crack.

The newly formed structures then became buried under sediment.  The cracks slowly filled through seepage with a coarse crystalline substance such as silica (quartz) or calcite from the shells of dead marine creatures.

The crystals which later formed are the bright yellow centres of the septarian nodule.  A thin wall of calcite was also transformed into aragonite or siderite which separated the heavy clay exterior from the crystallized centre. 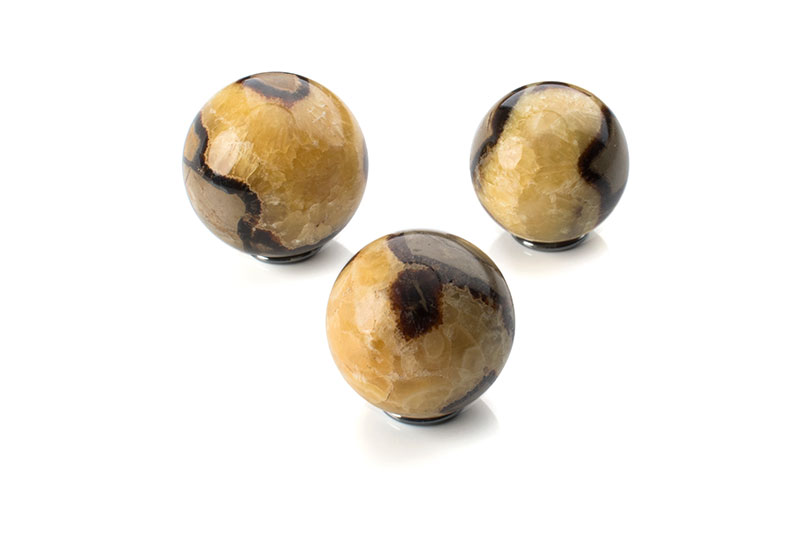 Whilst the exterior of the septarian nodule was hard and featured a network of ridges, the interior contained distinctive angular cavities or cracks.  These became known as 'septaria' from the Latin 'septum'.

Irrespective of how they formed, they subsequently filled with hardened natural minerals as groundwater changed and receded.  The minerals in the vast majority of cases were silica or calcite.

Describing precisely how septarian nodules form is not easy and there are many different views and interpretations.  Numerous questions remain unanswered and it's an ongoing topic of debate amongst geologists.  The general formation process however is one that's relatively common in sedimentary rocks.

The moeraki boulders are large grey coloured septarian concretions.  They can be found on a stretch of coastline in New Zealand.

The boulders which were buried for millions of years beneath mudstone began to appear because of erosion from coastal cliffs.  In years to come more are likely to emerge from the mudstone as geological changes continue to reshape the landscape.

The largest septarian concretions are estimated to have taken about four million years to reach their current size.

Almost identical spherical boulders can be found close to Hokianga Harbour on the North Island.  Similar concretions can be found in many countries around the world.

The Moeraki boulders are famous primarily because of their spherical shape and size. 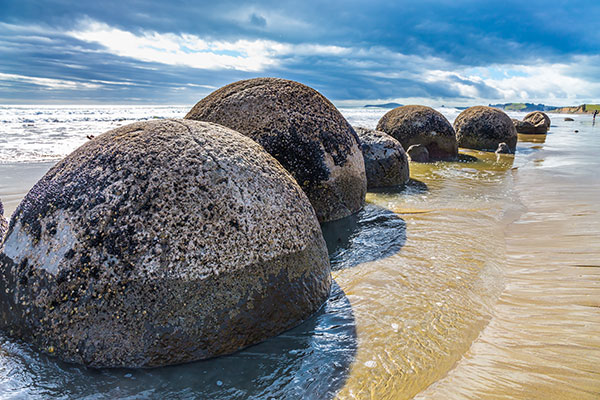 The healing properties of septarian revolve around taking care of the planet.  With it being associated with Earth it's incredibly grounding.  Septarian brings deep balancing energy up through the root chakra.

This stone can help you to understand things about life or the planet that you may have struggled to fully understand before.

It harmonises emotions with intellect, creates new ideas and the enthusiasm to follow them through.  It breaks repetitive routines or patterns of behaviour, improves patience and increases tolerance and endurance.

Septarian is a joyful stone that's emotionally nourishing and calming.  It can offer support for those who speak in public and can help improve communication within a small group.

It's widely used by healers as a tool for nurturing and showing care for others.  Its healing properties can be very powerful so septarian is often used to aid seasonal affective disorder (SAD).

Septarian can help you learn how to understand your own feelings and emotions. It teaches the importance of learning about yourself and appreciating qualities that are unique to you.

The ancient energies of septarian can be used to cleanse the aura.  This helps get rid of feelings and emotions you no longer need and which are likely to be holding you back.  Cleansing the aura helps the physical body to breath more easily.

When used during meditation septarian takes you on a journey into the past.  It helps you look back in a more positive manner at events in your life that weren't so great.  Deeply buried feelings and emotions can then be gently released as you observe the events from a third person perspective.

Septarian can also be used to enhance astral journeys.

The picture of the septarian nodule at the top of our article is courtesy of Stan Celestian.

The piece in the second picture is on display in London's Natural History Museum.  The septarian polished spheres are from our collection.  Both photos were taken by Stone Mania.

All pictures are clickable and redirect to the original non-compressed image.  The third photo redirects to an amazing photograph of the Moeraki Boulders on Koekohe Beach on the east coast of New Zealand's South Island.