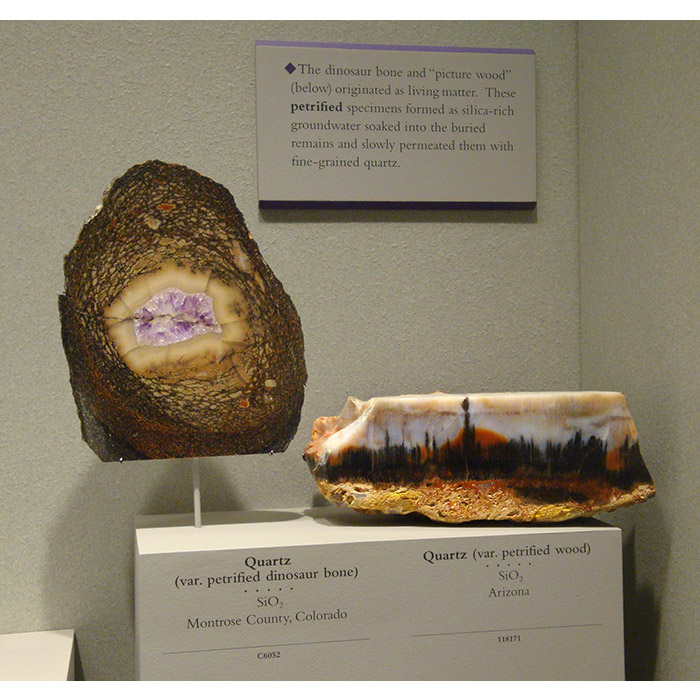 Dinosaur bone is the fossil remains of dinosaur bones in which the original cellular structure has been replaced with natural minerals.

When an organism is starved of oxygen soon after it dies, the normal process of decaying cannot take place.  It will therefore usually remain in tact for some considerable time.  Being preserved in this way allows the process of petrifaction to eventually take place.

For example imagine the skeletal remains of a dinosaur being covered with sediment or ash following a volcanic eruption.  Minerals being carried in groundwater then slowly seep into pores and cavities filling spaces between and within cells.  During this process the original tissue structure is preserved.

Once the water dries up the minerals left behind begin to crystallise.  The process happens very slowly over many thousands of years.

Almost all fossils are bone or skeletal remains which have been buried under sediment or ash.  This preserves them sometimes in almost perfect condition until the process of petrifaction begins.

Dinosaur bone is found mainly in Colorado and Utah in the United States.

The different colours are the result of various minerals that were present in the sediment.

As well as quartz, agate and pyrite, other minerals known to replace the cellular structure in dinosaur bone include common opal and calcite.

Dinosaur bone is used primarily for decorative purposes.  Whilst some may consider it to be an unusual choice for a gemstone, coprolite which is fossilised dinosaur excrement is even more bizarre.

Dinosaur bone grades 6 to 7 on Mohs scale of mineral hardness.

The dinosaur bone and petrified wood in our photo is on display at the Smithsonian National Museum of Natural History in Washington D.C.  Photo by Stone Mania.  The image is clickable and redirects to the original non-compressed photo.