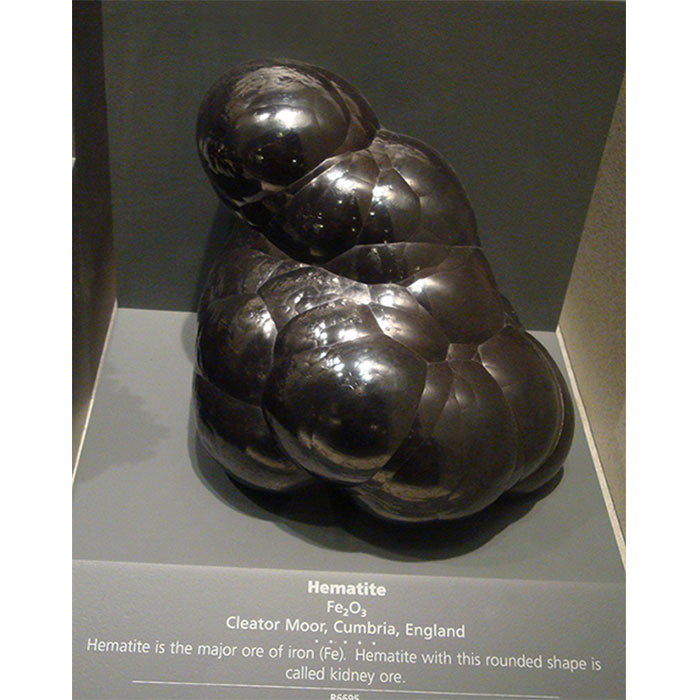 Hematite which can also be spelt haematite is a major source of metallic iron.  An iron oxide mineral it's made up of 70% iron and 30% oxygen.  Hematite is available in abundance around the world.

It usually occurs with other iron minerals such as goethite and magnetite.  Huge amounts of hematite can be found in a type of rock called a banded iron formationiron or BIF for short.

Hematite is widely used in the steel industry and ores containing a high percentage of iron can be fed straight into blast furnaces.  These convert iron oxides into liquid iron.

Although hematite is a dense mineral which makes it heavy, it's much harder than pure iron but also brittle.  Colour ranges from black to silver grey, brown to reddish brown and even red.

Hematite which occurs in many different forms has the same crystal structure as corundum.  Well formed crystals of hematite are quite rare.

Streak describes the colour of a mineral in powdered form.  It can often be a different colour to the stone.  Hematite has a blood red to reddish brown streak.  Only after being broken and exposed to air do the edges turn red and powdery.

After being heated hematite can become magnetic but the magnetism is very weak.

The coarse grains which are grey hematite indicate water is likely to have once been present.  With that said, their formation may also be the result of volcanic activity.

Another interesting fact about hematite is because of its density it can block x-rays.  It's therefore used to protect against radiation specifically in medical and scientific environments. 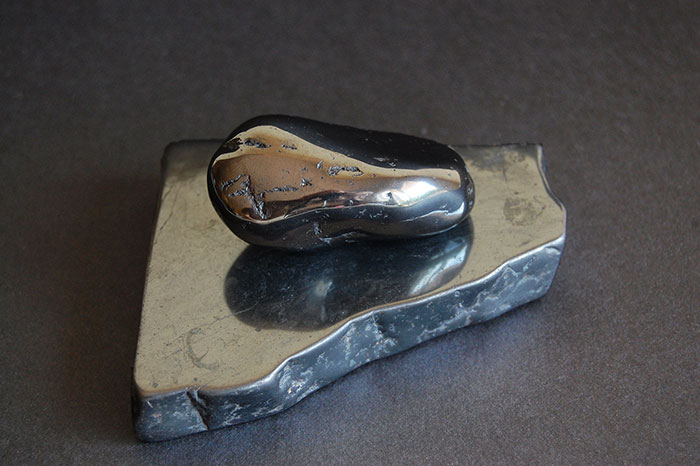 The name haematite originates from the Greek word 'haema' meaning blood.  This is because of its red coloured streak.

Throughout history this meaning has led to hematite being widely used for disorders of the blood.  Stones have also been carried to protect the wearer from bleeding.

The prefix 'haema' is present in the word haemoglobin which is the protein that carries oxygen around the blood.  It's also the prefix in 'haematoma' which is a solid swelling of clotted blood and 'haematology' which is the study and treatment of the blood.

Red ochre is one of the oldest pigments known to man.  It's made up primarily of the mineral hematite.

This reddish brown coloured iron oxide and main component of rust has been used for thousands of years around the world.

Red ochre has been identified in cave paintings known to be at least 40,000 years old.  It's believed to be one of the earliest powders that originates from a natural mineral.

Traces of hematite have been found on skeletal remains which date back 12,000 years to the Neolithic Age.

More recently hematite has been widely used by Native American Indians.  The mineral also featured prominently during the the New Age movement of the 1970s and 80s.

Today hematite is still widely used as a pigment.  Many of the red colours around us are composed to some degree of hematite. 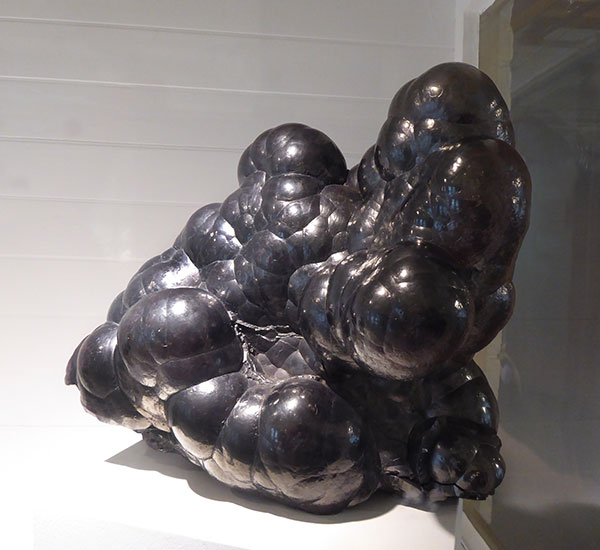 When used for its healing properties the iron in hematite makes it both grounding and protective.  It's used for building strength and boosts self esteem and willpower.  It's particularly beneficial for those studying mathematics or any other subject of a technical nature.

Hematite can help you to fight compulsions, overeating, stress and anxiety.  Meditating with a hematite crystal improves concentration and clears mental fog.  It induces a deep state of calmness and enables you to focus on nothing but yourself.

Other healing properties associated with hematite include dissolving negativity, protecting the aura and boosting memory.

If you're someone who gets easily distracted hematite will help get rid of unnecessary thoughts to enable you to stay focussed.  It aids problem solving and when dealing with conflict helps you to establish the facts.

In regards to a new relationship, hematite can stop things for progressing too quickly.  It will also give you the strength to move on should it not work out.

Although graded 5.5 to 6.5 on Mohs scale of hardness hematite is brittle.

When used as a gemstone although sometimes faceted it's most commonly found as a cabochon.  Faceted beads can sometimes resemble black diamonds.

The pictures in our article are clickable and redirect to the original non-compressed image.