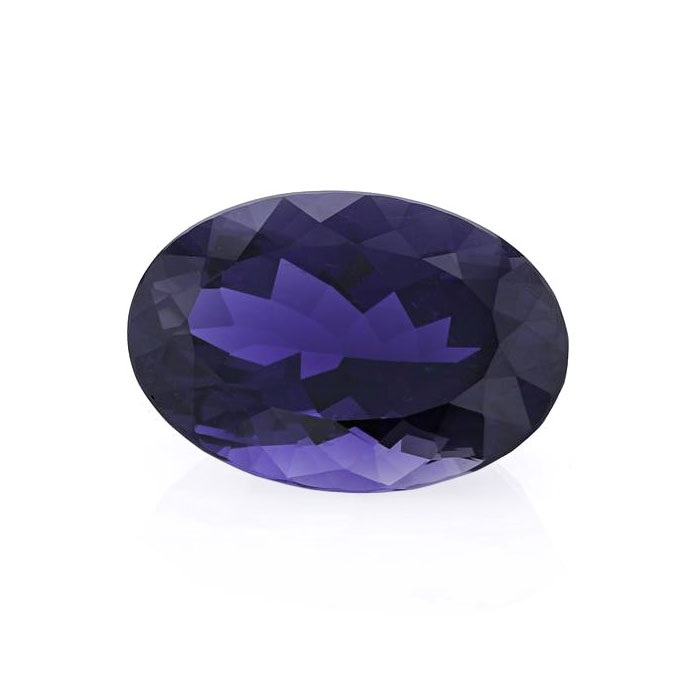 Iolite is the gemstone variety of the mineral cordierite.  It's translucent to transparent with a blue to bluish-violet colour.  It's often compared to sapphire but has more of a purple tint.

One of its most notable characteristics is pleochroism.  Pleochroism  is an optical phenomenon that enables a stone to exhibit different colours when viewed from different angles. Iolite was once known as dichroite which means two-coloured rock.

Although many gemstones are pleochroic, most have such minimal colour change it's almost unnoticeable.  The mineral cordierite and also tanzanite which is a blue to violet variety of zoisite, both exhibit pleochroism with colour change that can usually be easily seen.

Depending on the type of light, the angle from which the stone is being viewed and its colour, iolite can look violet, blue, bluish grey, green, yellow or can even appear to be colourless.

Although iolite grades 7 to 7.5 on Mohs scale of mineral hardness which is quite hard, it's not particularly tough.  With regards to rocks and minerals hardness and toughness are not the same.

Iolite has a perfect cleavage in one direction which means it can break easily as result of a knock, pressure or even an extreme change in temperature.  This makes cutting and polishing quite difficult.  It may also be the reason why iolite has never been widely marketed hence remains relatively unknown.

Although its colour can vary, iolite is best known for being a blue to bluish-violet coloured gemstone. The name comes from the Greek "ios" meaning violet.

The finest grades may be confused for blue sapphire or tanzanite. Being more readily available means iolite is far more affordable.

Unliked tanzanite and blue sapphire both of which are routinely heated, the colour of iolite is almost always natural. Heat enhances or can even change the colour of a stone completely. It does that by interfering with its chemical composition.

The mineral cordierite was named after French geologist Pierre Louis Antoine Cordier who first described it in 1809.  The gemstone iolite was officially classified and named in 1813.  It's widely believed to have been known and used in Sri Lanka long before then.

Iolite can be found in several countries around the world including India, Brazil, Sri Lanka, Mozambique, Zimbabwe, Madagascar and Myanmar.  It's widely believed to have been mined by the Vikings in Norway and Greenland.

When used for its healing properties iolite clears thoughts and opens intuition.  It has also been used for the purpose of understanding and releasing the causes of addiction.

Iolite helps release conflict and tension within a relationship.  It does this by giving you the strength to take responsibility for yourself in order to become more independent.