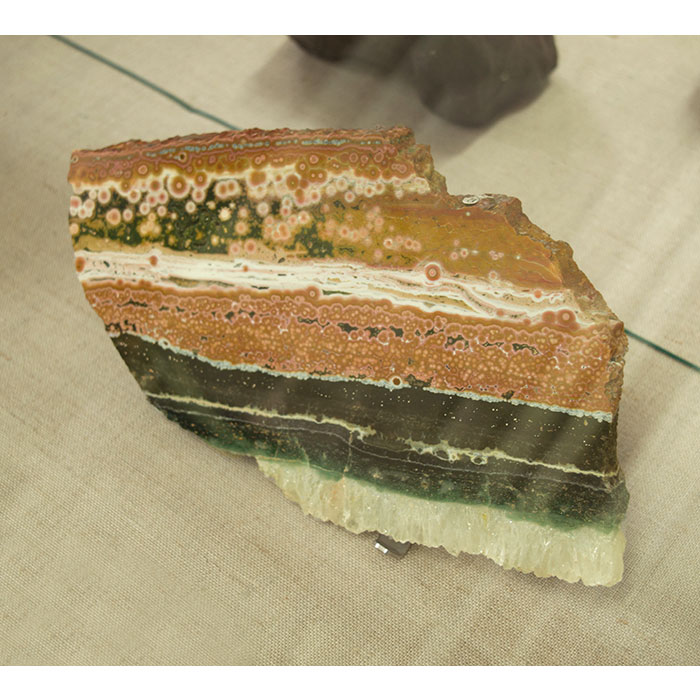 What is Ocean Jasper?

Ocean jasper is a rare and colourful material from Madagascar.  It has long been described as a variety of orbicular jasper.

Found on the north west coast of the world's fourth largest island, the original material is now completely mined out.

Orbicular jaspers are known for their orb-like or small spherical markings.  Stones can be found in many countries around the world but the variety correctly known as kabamby ocean jasper is unique to Madagascar.

The colours are caused by various mineral inclusions.  Red comes from iron in the form of hematite, yellow or grey is clay and shades of brown tend to come from goethite.

Ocean jasper is a registered trade name for what is now known to be a spherulitic chalcedony.  Chalcedony is a cryptocrystalline variety of quartz.  Cryptocrystalline means its crystals are too small to be seen with the naked eye.

A spherulite is a small rounded body often with a radiating structure made up of fibrous needle-shaped crystals.  They mostly occur in vitreous volcanic rocks.  The greyish white inclusions in snowflake obsidian are spherulites.  In ocean jasper the spherulites sit between grains of chalcedony and quartz.

The deposit where kabamby ocean jasper was first documented to have been found in the 1950's was incorrectly recorded as Kabamba which is central Madagascar.  It should have been documented as Kabamby which is a remote location on the north west coast.

For this reason the stone was forgotten about and remained hidden until finally being rediscovered almost fifty years later.

There is some evidence to suggest ocean jasper from Kabamby was discovered earlier than the 1950's.  On a receipt dated 1927 associated with a stone owned by German mining engineer and mineral collector Richard Baldauf [1848 -1931], ocean jasper  was referred to as "augenjaspis" meaning "eye jasper".

Renewed interest in finding the deposit followed the publication in 1977 of a photo of a particularly striking stone.  It was published in a French encyclopaedia of minerals.

Twenty two years later in 1999 the area where ocean jasper was found was finally rediscovered.  The remote location wasn't accessible by road and only became visible during low tide.

With the only access being by sea, large mechanical digging equipment could not be transported to the site.  The stone was therefore extracted by hand before being taken by boat to the nearest large town.

Ocean jasper was introduced to the world at the Tucson Gem and Mineral Show in 2001.

A total of seven deposits have been found so far but most if not all are now mined out.  The original deposit was exhausted by 2006.

Kabamby ocean jasper is often confused for kambaba jasper.  Kambaba is also known as kabamba after the area in the Bongolava region of Madagascar where it's found.

The two stones are quite different but due to articles online constantly being reproduced incorrectly, facts about both have become completely mixed up.

Kabamby ocean jasper grades 6.5 to 7 on Mohs scale of mineral hardness. Being relatively hard makes it easier to cut and polish. 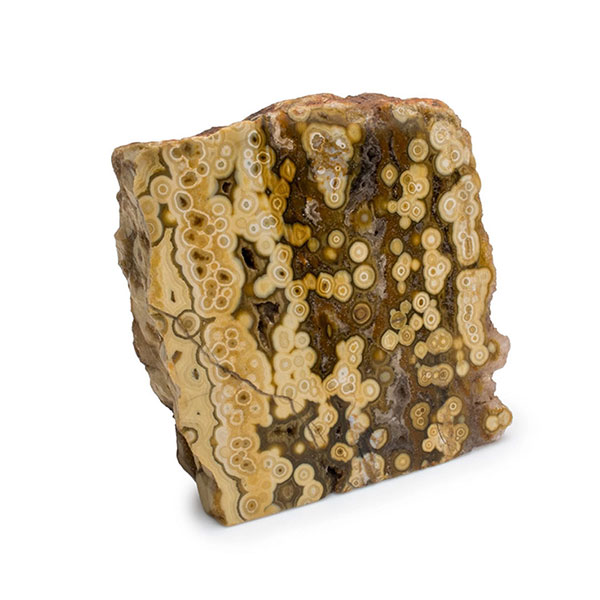 The properties of ocean jasper make it ideal for those who feel like they're carrying the weight of the world on their shoulders.  A stone of joy, it encourages a positive mood, strengthens will and brings calmness to chaos.

Ocean jasper can be used as a worry bead to alleviate stress, tension and to soothe nerves.  It promotes honesty, the courage to address difficult situations and the strength to deal with them.

Being associated with the ocean it carries with it great power.  It can help overcome sleep problems related to anxiety and depression and will calm irrational fears.

The ocean jasper in the picture at the top of our article was taken in London's Natural History Museum.  It's clickable and redirects to the original non-compressed image.

The piece in our second picture is from our collection.