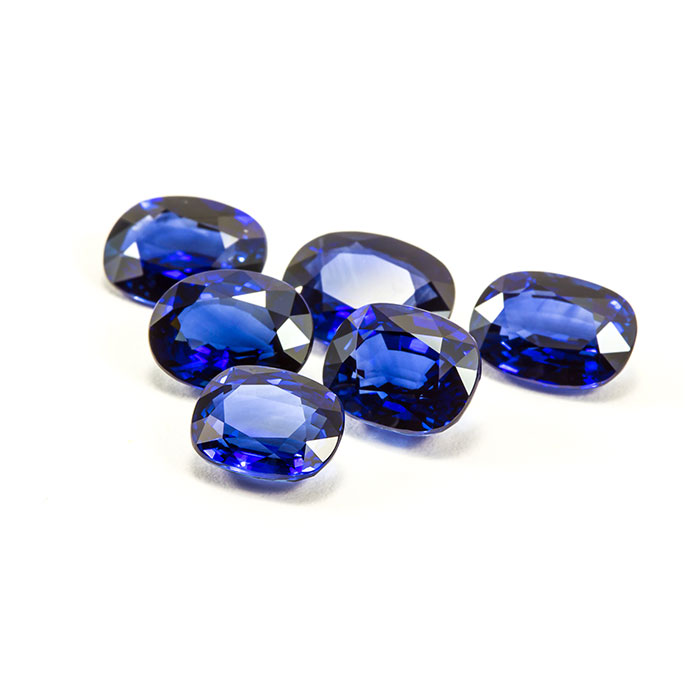 The name 'sapphire' comes from the Greek word 'sappheiros' meaning 'blue stone'.  It's generally believed that over many years this name was misused and originally referred to the stone known today as lapis lazuli.

The gemstones sapphire and ruby are both varieties of the mineral corundum.  Corundum is a crystalline form of aluminium oxide which is a chemical compound of aluminium and oxygen.

They have an almost identical composition with the most obvious difference being colour.  Gem grade red corundum is ruby, all other colours are sapphire.  Although sapphires can be found in several colours, pink and blue are the most popular.

The word 'sapphire' is used exclusively to describe gem grade blue corundum.  For colours other than blue the colour is incorporated into the name.  For example pink sapphire, black sapphire or yellow sapphire.  These alternative colours may also also be known as fancy sapphires.

Rubies and sapphires were identified as being varieties of corundum in the early 1800's.  Initially only the blue variety was known as sapphire.  Other colours excluding red were given various names most of which were very misleading.  Green sapphire was oriental peridot, yellow was oriental topaz.

Sapphire's colour is caused by impurities of iron and titanium.  Vanadium may also be present.  White sapphire which is quite rare is free from impurities.

Sapphires are more common than rubies.  The red in ruby is caused when aluminium is replaced with chromium.

Some sapphires can exhibit a star-like optical phenomenon known as asterism.  This is caused by the reflection of light off needle-like inclusions of the mineral rutile.  For it to be fully appreciated the stone must be shaped and polished as a cabochon.

Most of the world's finest sapphires are heat treated.  Heating can improve the colour and clarity of a stone permanently.

Famous Sapphires Around the World

Sapphire has been associated with royalty and nobility throughout history.  Princess Anne and Princess Diana both wore engagement rings that featured a blue sapphire.

The Stuart Sapphire and St Edward's Sapphire are both part of the British Crown Jewels.  The Logan Sapphire one of the largest faceted gem-grade blue sapphires in existence is housed in the National Museum of Natural History in Washington D.C.

Other famous sapphires include the Black Star of Queensland which before the discovery of the Star of Adam was the largest star sapphire ever to have been mined.

The Star of Adam was found in Sri Lanka in 2015.  The name comes from the Muslim belief that Adam went to Sri Lanka after being expelled from the Garden of Eden.  It's believed he lived out his days on Adam's Peak, a well known mountain not far from the city of Ratnapura.  The Star of India also mined in Sri Lanka is currently housed in the American Museum of Natural History in New York.

When used for its metaphysical properties sapphire improves concentration, mental clarity and helps focus the mind.  It has the ability to find solutions to problems and can remove mental tension bringing inner peace and serenity.