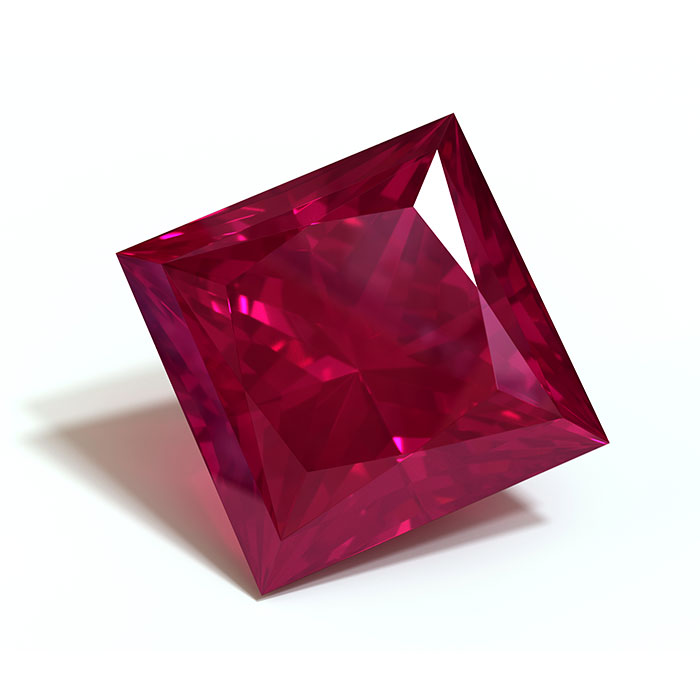 Ruby is red corundum.  Corundum is the hardest mineral on Earth after diamond.

Impurities of chromium are the primary cause of the colour in the gemstone ruby.  The chemical composition of ruby is almost identical to sapphire.  Red corundum is known as ruby, all other colours are sapphire.

The similarity between ruby and sapphire has only been fully understood since the beginning of the 19th century.  Until then red garnets and spinels were also believed to be rubies.

The Black Prince's Ruby and Timur Ruby both incorrectly identified as rubies were later found to be spinels.

The word 'ruby' comes from the Latin 'ruber' meaning 'red'.

Colour is the most important factor for determining the value of a ruby.  The finest grade gemstones command extraordinary prices.

Almost all rubies have minor imperfections or anomalies.  Millions of years ago whilst growing deep within the core of Earth, the chromium responsible for the red colour also caused fissures and cracks within the crystal.  Very few enjoyed the right conditions to grow undisturbed in order to crystallise to perfection.

An important mining area for rubies during the 1990's was a small town in north east Myanmar (formerly Burma).  The first rubies to be discovered there were not classified as gem grade stones.  This was because they displayed two colours, a purple to black core and bright red periphery.

It was some time before it was discovered the shade of red could be deepened by the heating the stone.  This increased the value dramatically.

Ruby can be found in a number of locations worldwide.  About 90% are heat treated to enhance or change the colour.

It's usually the rough stone that's heated before cutting begins.  An unheated ruby is considered to be extremely unusual.

Ruby is believed to have been the first stone in the first row of the high priest breastplate.  This religious garment was worn during biblical times by the first Jewish high priest.

Ruby which grades 9 on Mohs scale of mineral hardness is the birthstone for the month of July.  On the traditional birthstone chart onyx is used as an alternative.