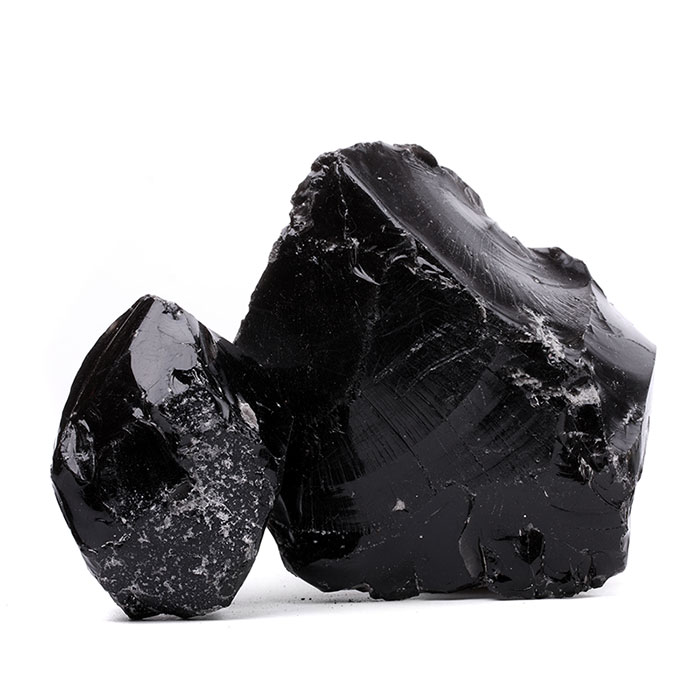 Obsidian is natural volcanic glass produced as magma erupts onto the Earth's surface.  This burning hot material then cools so rapidly against air, water or rocks that crystals do not have time to grow.

Magma is molten rock from beneath Earth's surface.  Once spewed out from the vent of a volcano it becomes known as lava.

Although lava initially cools fairly rapidly after being expelled, it has insulating properties so the cooling process slows down significantly over time.

Crystals do not have time to grow if it cools very fast as in hours to days.  They may start forming after a few weeks but will at best be microscopic.

A material that's not crystalline (no crystals present) is not a mineral.  These materials which include obsidian are known instead as mineraloids.  Other examples include jet, amber, moldavite, pearl and opal.

Some of the finest obsidian forms beneath the surface of the earth as molten magma seeps between fractures in rocks.  These tend to be close to the vent of the volcano.  The glass that subsequently forms will often be free from dirt, ash and other impurities.

Obsidian is rarely older than about twenty million years.  When compared to the age of many rocks and minerals that's relatively young.  Shungite is estimated to be at least two billion years old, zircon is around 4.4 billion years old.

Most magma contains at least 70% silicon dioxide which is the main constituent of obsidian.

Although often referred to as a 'stone' that's not quite accurate but finding a more appropriate word for obsidian can be difficult.  One respected geologist describes it as "a congealed liquid with impurities of rock and a limited number of microscopic crystals".

The way obsidian breaks is similar to glass.  The correct term for this type of break is a conchoidal fracture.

This characteristic is typical of many brittle materials which are not crystalline.  Edges will often be curved and can be as sharp as a razor blade.

The properties of obsidian make it one of the sharpest of all naturally occuring materials.  For this reason it was widely used during the Stone Age for knives, spear tips and arrows.

In recent years the scalpel used by surgeons have been made from obsidian blades instead of conventional steel.  They create a finer incision hence wounds heal faster and with less tissue damage.  The result is less scarring.

A steel scalpel has a cutting edge similar to a saw due to the metal's crystalline structure.  The edge of a non crystalline material such as obsidian is completely smooth so the incision is cleaner and more precise.

Different types of obsidian can be found in many locations around the world.  Oregon has many gem grade varieties including mahogany, red, black, rainbow and snowflake.

The colour of obsidian is determined by inclusions and/or impurities present.  Tiny bubbles caused by water vapour, air or gas can also produce different types of sheen.

A golden sheen is known as sheen obsidian whilst iridescent material with circular-like patterns is known as rainbow obsidian.  Hematite causes the red and brown varieties whilst inclusions known as spherulites (spherical bodies) cause the whitish grey markings in snowflake obsidian.

The presence of iron and magnesium produces black obsidian which is the most well known. 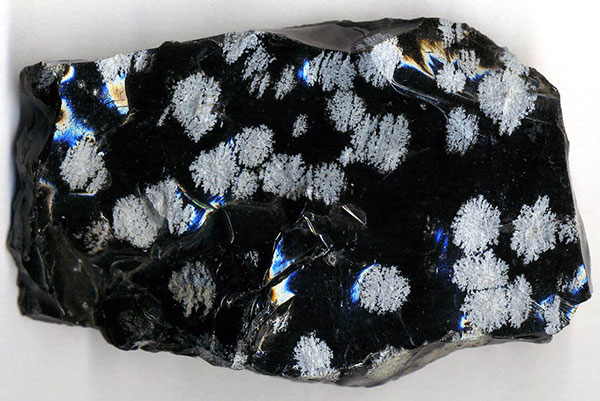 The spherulites in snowflake obsidian are difficult to see in detail without powerful magnification.  They're known to have radiating fibrous needle-like crystals.  These tend to be made up of quartz and feldspar and have formed through a process known as devitrification.

During devitrification atoms within the volcanic glass rearrange themselves into an orderly repeating pattern.  The material therefore changes from being a solid that's amorphous into one that's crystalline.  In other words what was once glass has become stone.

The word devitrification comes from the Latin 'vitreus' meaning 'glassy and transparent'.

The word vitreous is widely used to describe the surface of a stone whose surface interacts with light in a similar way to glass.  Spherulites tend to have a duller lustre than the host rock.

On Mohs scale of hardness obsidian grades 5 to 5.5.  Being natural glass it's brittle so must be handled carefully.  Most material comes from countries with extensive volcanic activity.

The meaning of obsidian (Latin obsidiānus) is said to have come from a misreading involving the word 'obsiānus'.  Obsiānus lapis meaning Obsius's stone was a reference to a stone found by Obsius.  Lapis is the Latin word for 'stone'.  Lapis lazuli means 'stone from the sky (or heaven)'.

Among the various kinds of glass, we may also reckon Obsian glass, a substance very similar to the stone which Obsius discovered in Ethiopia.  The stone is of a very dark colour, and sometimes transparent; but it is dull to the sight, and reflects when attached as a mirror to walls, the shadow of the object rather than the image.  Many persons use it.   (Naturalis Historia chapter 67).

Polished black obsidian was used as a mirror by the Aztecs and Greeks.  Black obsidian was widely traded by many ancient cultures along the main trade routes.  This was primarily because of its suitability for crafting into blades and tools.

Obsidian continued to be used in the ancient Middle East for thousands of years after the introduction of metals. 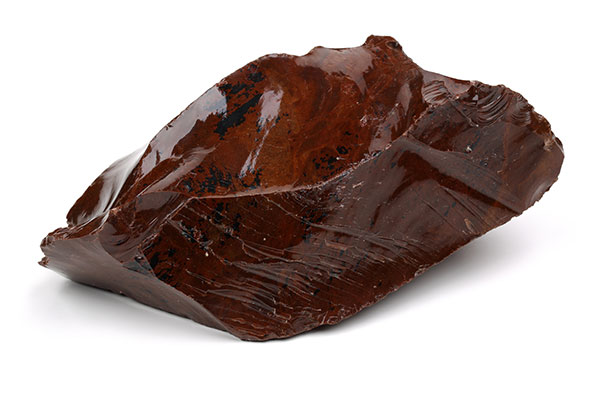 The healing properties of obsidian can be exceptionally powerful.  During the Middle Ages it was used to drive out evil spirits and demons.  Today it's used to clear unwanted energies from the aura or from within the home.  It acts like a shield repelling negative or harmful energies.

Obsidian is said to cut to the heart of the matter.  It brings issues to the surface and can be very confrontational to the user.  Those using it should be prepared for a full onslaught.  It can help you to deal with difficult situations in a clear and direct manner.  It works hard to get issues resolved so you can move on and start afresh.

Black obsidian can bring support and comfort to those who are grieving or who are separated temporarily from a loved one.  It can be used to sever unwanted ties or to distance yourself from people who are a drain on your energy.

Sleeping with black obsidian deepens sleep and enhances the experience of astral journeys.  Meditating with a crystal in your hand or carrying one on your person helps you remain centered and grounded.

The picture of snowflake obsidian is courtesy of James St.John. The photo is clickable and redirects to the original non-compressed image.  The next picture is red obsidian.