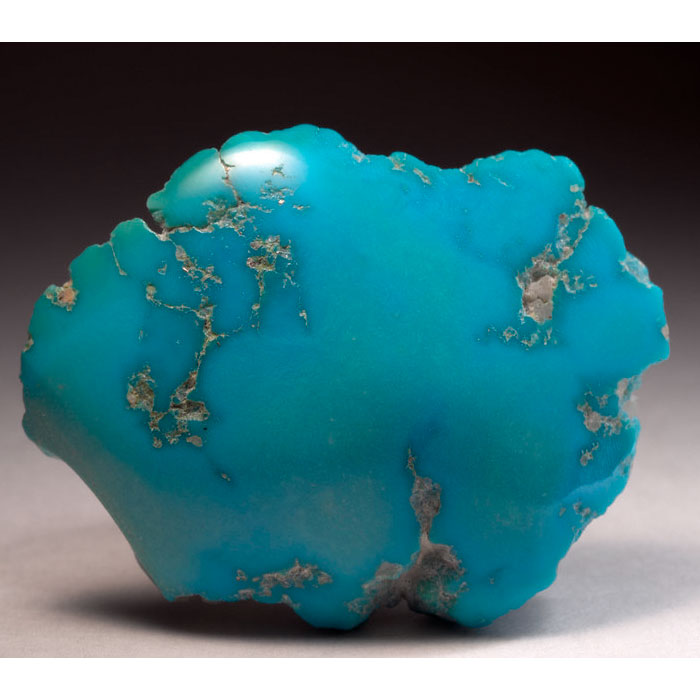 The meaning of turquoise comes from 'turquois' which means 'Turkish stone'.  This is the name given to this mineral by the French in the 17th century.  They believed it originated from Turkey when in fact it had only passed through there on its way to Europe.  The turquoise would have been mined in the north east of Persia which is modern day Iran.

The mineral turquoise is one of the oldest gemstones and is still one of the most popular.  Widely used in jewellery by many cultures around the world, its history can be traced backed as far as 6000 BC.  Records from the reign of the Pharaoh Semerkhet detail extensive mining operations that involved thousands of workers.

The most famous artefact featuring turquoise is the funerary mask of King Tutankhamun.  This priceless work of art also features lapis lazuli, quartz, carnelian, feldspar, other gemstones and coloured glass.

Imitation turquoise found by archaeologists indicate it's likely to have been the first gemstone to have been copied.

The Ancient Roman author and philosopher Pliny the Elder wrote about turquoise in his works Naturalis Historia.  Published around 77 AD, he referred to the stone as callais or callaina. 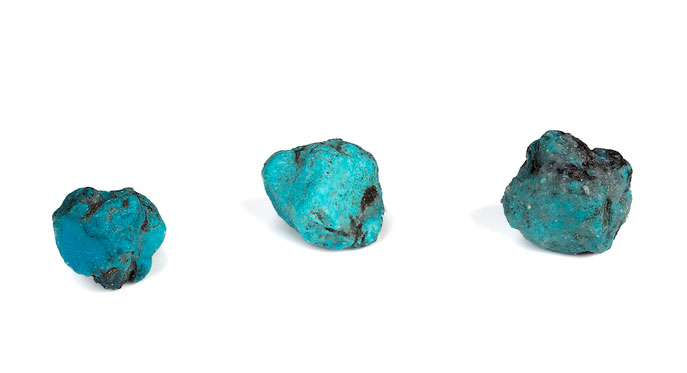 In the bible turquoise is said to have been the first stone in the second row of the high priest breastplate.  This religious garment was worn over the top of a type of tunic.

Turquoise is known to have been mined as early as 1000 AD by the Anasazi natives of the south western United States. The stone was also widely used by the Incas, Aztecs and Maya.

Turquoise has long been revered by Native American Indians including the Navajo, Apache, Zuni and Pueblo tribes.  By far the most important gemstone used in traditional jewellery, many would argue turquoise is fundamental to American Indian culture.

Napoleon I gave his second wife a diadem on the occasion of their marriage.  It was made by French jeweller Etienne Nitot et Fils of Paris.  It originally featured emeralds and diamonds set in gold and silver.

In 1953 the diadem was sold to Van Cleef and Arpels who at some time between 1956 and 1962 replaced the emeralds with seventy nine Persian cabochons. The emeralds were subsequently sold in other pieces of jewellery.  They were promoted as being gemstones from the historic diadem. 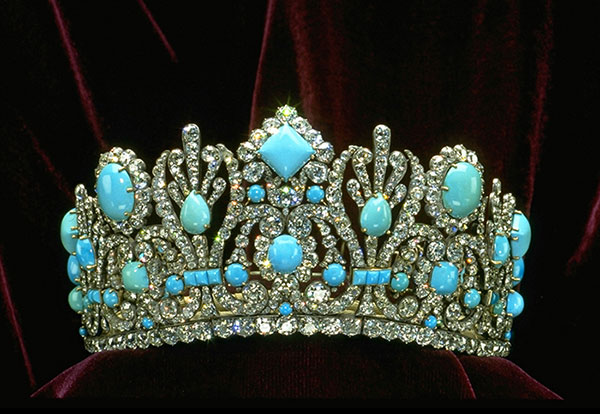 How to Tell Real Turquoise from Fake

It's always worth considering whether a turquoise stone is real or fake.  Cheaper substitutes have been produced throughout history and huge quantities of fake turquoise are produced today.

The most popular man-made materials being used are plastic, glass and ceramic.  If a stone is lightweight and warm to the touch it's definitely plastic.  Other materials may not be quite as obvious.

Howlite which is a natural mineral is widely used to replicate turquoise.  It's relatively cheap, can have similar markings and being porous makes it easy to dye.  The dark spidery veins can be mistaken for the matrix in turquoise.

Telling the difference between real and fake turquoise stones can sometimes be easy on sight alone.  The most obvious clue however will be price.  Real turquoise is not cheap.

Other minerals used to replicate turquoise include chrysocolla and azurite.  Both are much softer which would quickly become apparent if a stone was tested for hardness. 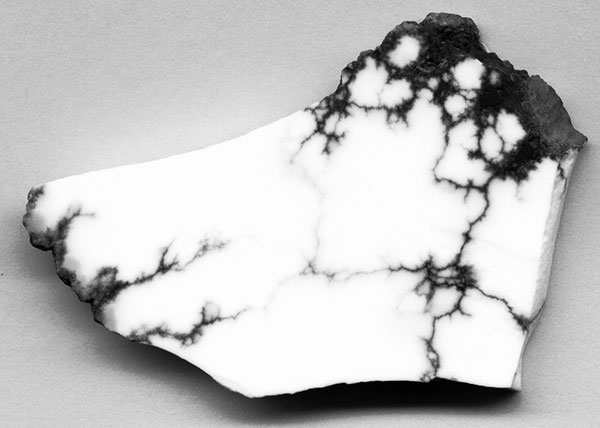 The following photograph comes from a respected website that sells stock images.  The photographer whose collection is mostly diamonds labelled these stones as 'three turquoise cabochons'.  They may possibly be howlite that has been dyed but I think it's more likely they're man-made.

The only thing turquoise about the stones is the colour.  Not all fake turquoise is as ridiculously obvious as this. 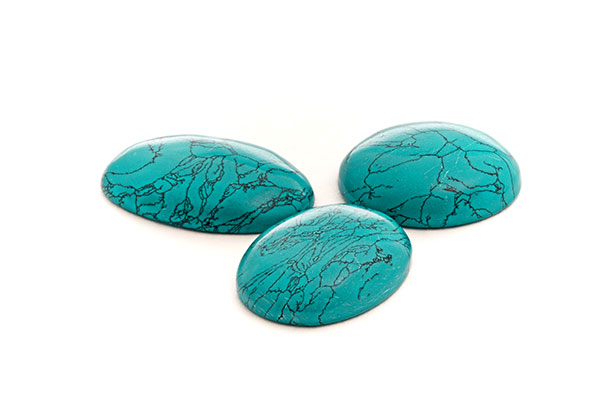 There are several tests that can be carried out to determine whether turquoise is real or fake.  Sadly most will cause some form of damage.  The least destructive and easiest method is a scratch test.  This measures the resistance of one mineral being scratched by another.

On Mohs scale of mineral hardness turquoise grades 5 to 6.  This means it can be scratched by another mineral with the same hardness or one that's higher.  Howlite grades 3 to 3.5, azurite 3.5 to 4 and chrysocolla just 2.5 to 3.5.  Fluorite grades 4 on Mohs scale so will scratch all three minerals.  It won't scratch turquoise. 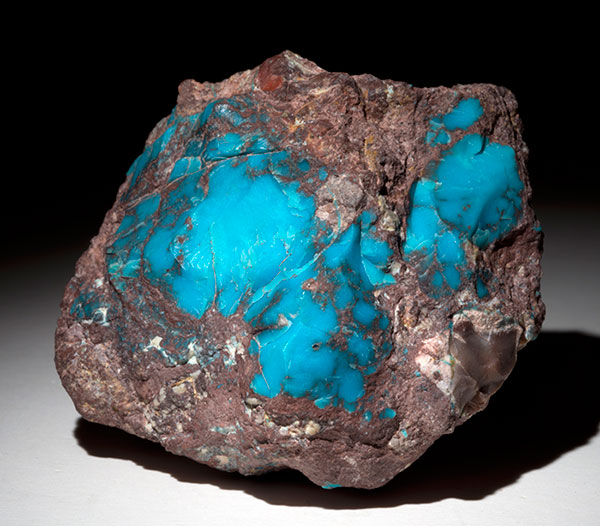 Personal preference for the colour of turquoise varies from one country to the next.  In Iran where it has been highly prized since antiquity, the bluer shades are more popular.  In Tibet and India green is the colour of choice.

The colour of the mineral can vary significantly from subtle shades of blue to rich shades of green.  Copper is the chemical element responsible for blue whilst green is caused by impurities of iron.  Although rare, yellow is caused by zinc.

The spidery veins often seen in turquoise are correctly known as matrix.  They're part of the host rock in which the mineral evolved.  Pure blue turquoise void of matrix is highly sought after.

Turquoise is a relatively soft stone that's also fragile.  Being porous means it can absorb moisture including oils from the skin.  Over time this can cause irreparable damage.

The colour of turquoise can fade if exposed to excessive heat.  In extreme circumstances it may even crack.  Stones should be protected from perfumes, hairspray, cosmetics and other pollutants in the atmosphere.  If not removed quickly these can leave a residue which may turn into a permanent mark.

There are many superstitions associated with turquoise most of which relate to its tendency to fade or change colour.

According to the modern birthstone chart turquoise is the birthstone for December.  Blue topaz may be used as an alternative.

The USA, Tibet, China, Afghanistan and Australia are the world's main producers. 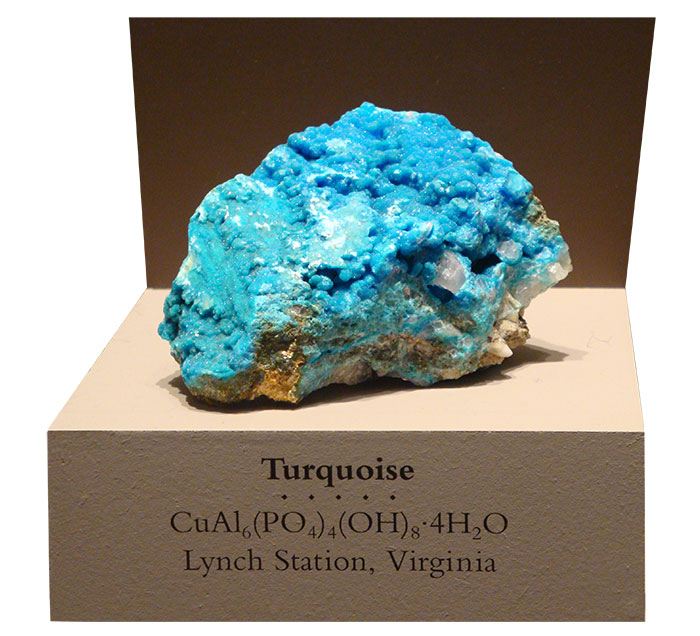 The benefits and healing properties of turquoise most widely documented include strengthening the immune system and its ability to get energy glowing through the body.

Turquoise is a master healing stone that comforts, supports and replenishes.  Throughout history it has been used for protection and was believed to change colour if danger was approaching.

It promotes spiritual development and the ability to communicate with other realms.  It can be used to explore past lives and to release unwanted patterns of behaviour.

Turquoise purifies the environment and dispels negative energy.  It balances male and female energies, is great for problem solving and can help calm nerves when speaking in public.

The calming energy of turquoise may also be used to calm fiery emotions.

The green and blue colour in which turquoise occurs combines the energies of the heart and throat chakras.  The crystal can therefore be used to enhance self expression and improve communication especially in matters relating to love.

Turquoise should not be allowed to get wet and should not be placed in sunlight.  Exposure to either is likely to cause the stone to mark, lose colour or even crack.

The turquoise stone at the top of our article is from the Sleeping Beauty mine in Arizona.  The turquoise in the last picture comes from Bisbee south east Arizona.  These two photos are courtesy of Stan Celestian.

The photo of Marie Louise's diadem comes from the website of the Smithsonian Museum of Natural History where it's currently housed.  The turquoise in the last photo is housed in the same location.

The picture of the mineral howlite is courtesy of James St.John.  The rough turquoise stones comes from our collection.

All pictures are clickable and redirect to the original non-compressed photo.