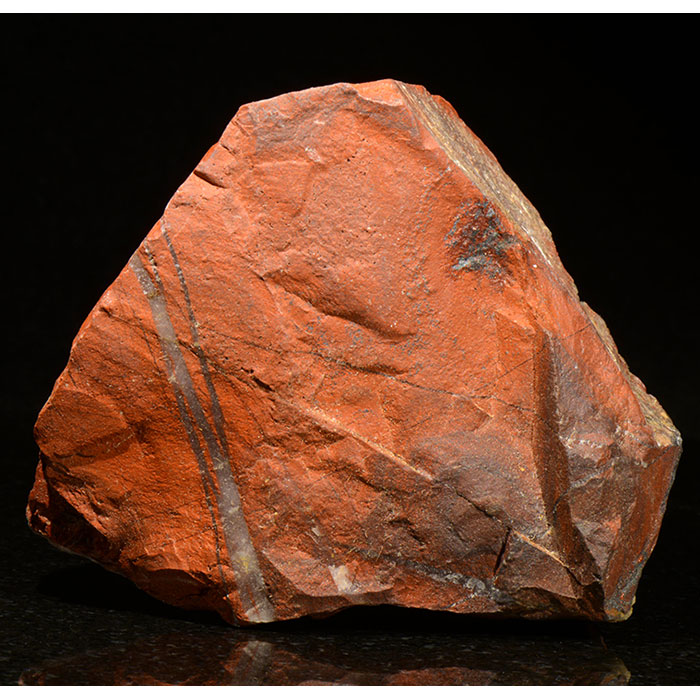 Jasper which is a microcrystalline variety of the mineral chalcedony is a well known and popular stone.  Microcrystalline means its crystals are too small to be seen with the naked eye.

Although often referred to as a mineral, some consider jasper to be a rock.  This is because although made up primarily of quartz and/or chalcedony, it often features impurities of other minerals and substances.

Impurities are the reason why jasper is opaque.  They're also responsible for the many different colours and markings.

Jasper stones can be exceptionally colourful and usually exhibit more than one colour.  Colours are rarely uniform and often overlap or merge into each other.  Whilst blue is rare, shades of red yellow and brown are common.  Stones can also exhibit many other colours.

The formation of jasper can begin when loose sediments become stuck together.  This happens when groundwater containing silica that has seeped into sedimentary rock subsequently dries up.  The silica then acts like glue and cements everything together.

The different sediments determine the colour of the stone.  Patterns are often the result of the motion of natural forces that brought the sediment (or volcanic ash) together.

Jasper can also develop through the crystallisation of hot solutions in cracks of igneous rocks.

Well known for its variety of colours and markings, jasper is widely used for decorative purposes.

This relatively hard stone grades 6.5 to 7 on Mohs scale of mineral hardness.  Different varieties can be found in almost every country in the world.

Many types of jasper are used for their metaphysical healing properties.  Although each variety has slightly different benefits, all jasper stones irrespective of colour or markings are profoundly grounding.  They have an intense nurturing ability that brings comfort, reassurance and protection especially when you're feeling down.

One of the most important benefits of jasper is that it can be used to re-align the chakras.  This is important because when out of alignment you can feel as if you're being pulled in all directions.

Jasper is associated with deep relaxation, calmness and tranquillity.  It's a great companion for those who deal with stressful situations.

The colours in jasper are not light sensitive.  Stones can therefore be placed outside on a sunny day or be left to absorb the energy from the moon.

Many stones are given trade names to boost popularity and increase sales.  Names often relate to a specific characteristic or the locality where the stone is found.

Dalmatian, leopardskin and zebra jasper exhibit colour or markings similar to the respective animals. Landscape, scenic and picture jasper are all types of mudstone. These varieties usually exhibit markings that resemble a landscape.

Mookaite from Western Australia is named after Mooka Creek.  There are hundreds of different names but many including noreena, polychrome, poppy and imperial offer little or no clue as to the origins or characteristics of the stone. 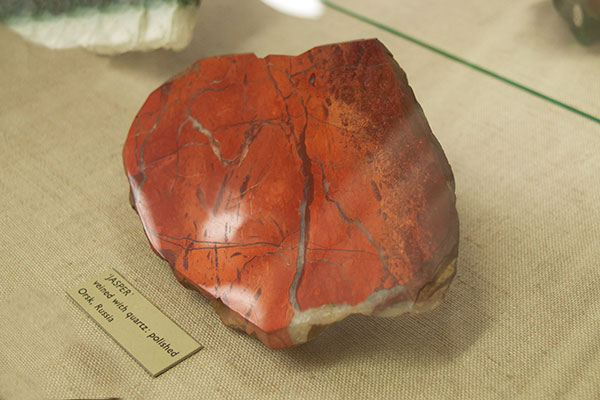 Although known for thousands of years the stone referred to as jasper by ancient writers such as Theophrastus [c.371 - c.287 BC], Pliny the Elder [23 - 79 AD] and others was not the same stone as the jasper we know today.

In ancient times the stone known as "iaspis" was mostly described as being translucent.  Some wrote it may also be cloudy and was often associated with 'smaragdos'.  Smaragdos is known today as emerald.

Although documented as being green, some writers including Pliny claimed "iaspis" also occurred in blue, purple, pink and could even be colourless.

It's widely believed "iaspis" was a generic name for translucent or transparent varieties of quartz not known by any other name.

There are indications the mineral fluorite and even jade may also have been included in this group.  This is because it was common for rocks and minerals to be grouped together according to colour.

The stone referred to as pink jasper is likely to have been rose quartz.  Blue would have been a type of chalcedony, green chrysoprase and stones with hues of brown were probably smoky quartz.

These varieties of jasper were all widely used as seals which has helped historians to identify them.

Jasper has been used as a carving material for thousands of years.  It was particularly popular for use in jewellery.

There are references to jasper in Greek, Hebrew, Assyrian and Latin literature.  In the Bible (Exodus 28.20) it's identified as one of the gemstones in the high priest breastplate.  "Iaspis" is said to have been the third stone in the fourth row of this biblical garment.

The jasper in the picture at the top of this article comes from Cave Creek, Arizona. Photo courtesy of Stan Celestian.

The red jasper veined with quartz in our second picture is on display in London's Natural History Museum.  Photo by Stone Mania.  Both photos are clickable and redirect to the original non-compressed image.

Our Collection of Jasper