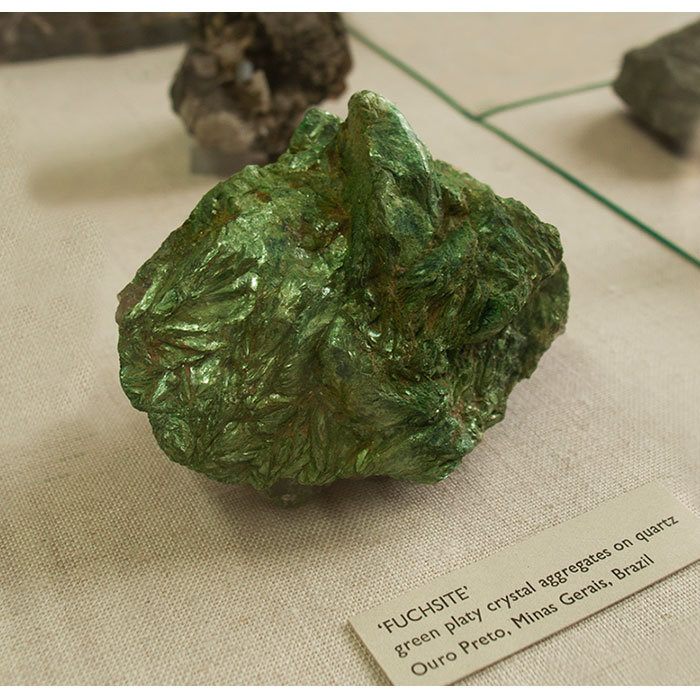 Fuchsite is a variety of chromium rich muscovite.  The more chromium present the richer the colour.  In some cases it can even be similar to emerald.

When chromium is replaced by aluminium the shade of green becomes distinctively lighter.

Fuchsite which is a radioactive mineral fluoresces lime green under ultraviolet light. This is because of the presence of potassium.

Fuchsite can often be found as tiny mineral inclusions in certain rocks.  When present in larger quantities the stone is known as verdite.

A relatively soft mineral fuchsite is rarely found with good purity.  It grades 2 to 3 on Mohs scale of mineral hardness and often features inclusions of red corundum.

Ruby in fuchsite as it's correctly known is often mistaken for ruby zoisite.  Ruby zoisite however is much rarer hence more expensive.  It's also harder than ruby in fuchsite and often exhibits visible crystals of black hornblende.

The name fuchsite is often misspelt and mispronounced.  It was named after the German chemist and mineralogist Johann Nepomuk von Fuchs hence is pronounced fook-site.

The fuchsite in our photo is on display in the Natural History Museum London.  Photo by Stone Mania.  The picture is clickable and redirects to the original non-compressed photo.