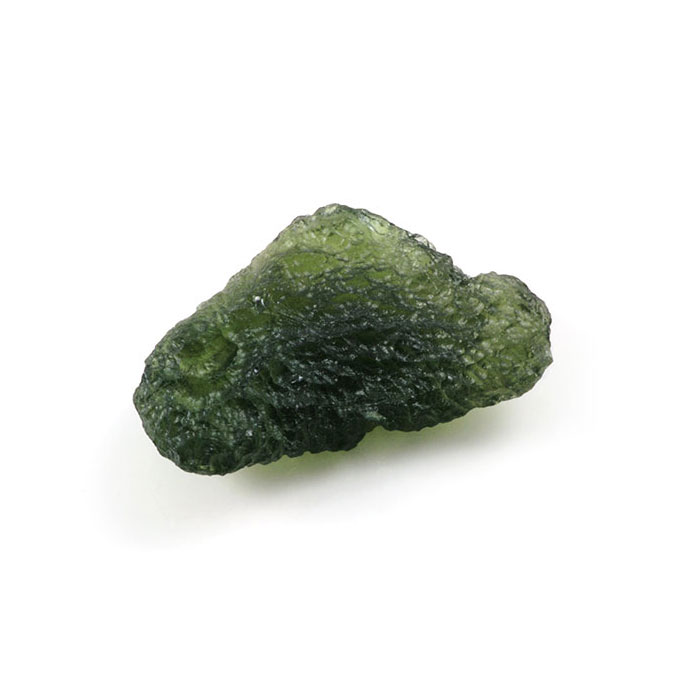 Moldavite is a curious glass-like material believed to have formed following a meteorite shower that fell in the Moldau Valley (now the Czech Republic).  The event is estimated to have taken place approximately 14.8 million years ago.

Sometimes incorrectly spelt moldovite, this translucent dark green stone is relatively rare.  When unpolished it has a particularly distinctive texture.

Moldavite is part of the family of 'glassy objects' known as tektites.  These include irregular and sometimes intricately shaped nodules or 'blobs' of a glassy substance that often contains tiny bubbles.

Moldavite is not crystalline meaning it has no internal crystal structure.  For this reason it's not a mineral.  Naturally occurring solids with no significant crystal structure are correctly known as mineraloids.

The chemistry of tektites is unique and somewhat unexplained.  Samples taken from rocks at the impact site where moldavite formed suggests it was created following an impact from a meteorite.

The event would have caused enough heat to melt the bedrock which would have been ejected up into the atmosphere and possibly higher.  As it rapidly cooled and fell back to Earth the liquidised stone formed glass-like bodies known as tektites.

Substances that formed during different impact events have different names.  Moldavite is by far the best known of all tektites.

The pitting on the surface of moldavite was caused by it being submerged beneath water for a long period of time.

It's generally agreed moldavite is either an extraterrestrial meteoric material of unknown origin or the resulting splash from a meteoric impact.  Some believe it may be a by-product of a volcano on the moon.

Other more dramatic theories suggest it may have been produced by the explosion of an Earth-like planet in the asteroid belt. 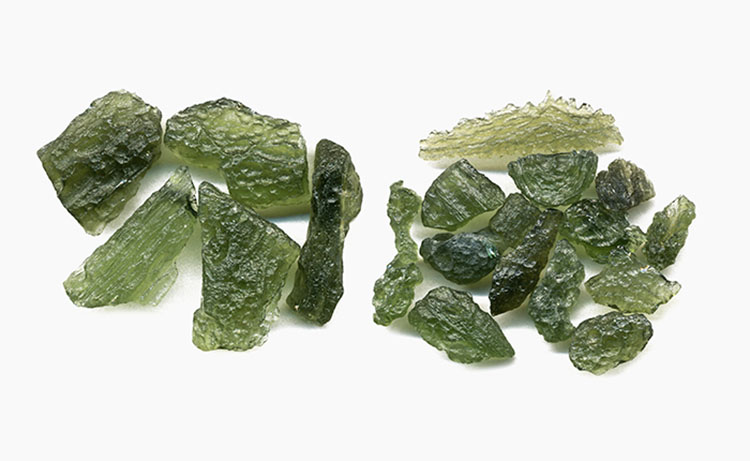 During the Stone Age moldavite is known to have been used to make tools.  Thousands of years later it was a popular talisman.

Some believe it was originally an emerald that fell from the sky out of the crown of an angel.  Exposure to anything that's been in contact with moldavite is said to quicken one's spiritual evolution.

When used for its healing properties moldavite is considered to be extremely powerful for spiritual development.  It can be used to enhance communication and to stimulate the co-operation and transfer of energies between those of extraterrestrial origins and those who inhabit Earth.  It's believed to be an important stone for this phase of human evolution.

Moldavite grades 5 to 5.5 on Mohs scale of hardness.

One thing it's important to be aware of is moldavite is rare and pretty expensive.  As a result fake material is now in wide circulation.  If you're looking to buy moldavite only buy from a reputable dealer, look at reviews from previous customers if possible and do some research before parting with your hard earned cash.  Otherwise you could end up with nothing more than a piece of green coloured glass.

The second picture of moldavite in our article is courtesy of James St.John. The photo is clickable and redirects to the original non-compressed image.