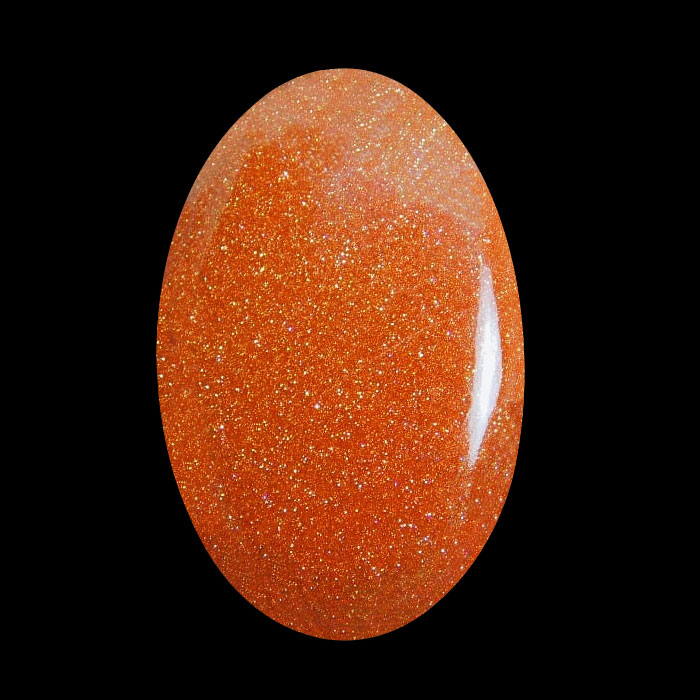 Goldstone is a man-made material that's sometimes called aventurine glass.  The name is not used quite as often because it implies an association with aventurine quartz when in fact the two have little in common.

Goldstone is considered to be an imitation of aventurine feldspar which is sunstone.  It's made of crystallised copper in glass.  It's widely reported goldstone is produced by adding minute specs of copper to molten glass.  Although goldstone is glass filled with copper, the way it's produced is more complex.

The glass is first heated until it becomes molten.  Granules of copper oxide are then added to the mixture and dissolve because of the high temperature.  Once fully dissolved the melt is allowed to cool during which time the copper forms octahedral-shaped crystals.  The slower the glass cools the larger the crystals.

The shape of an octahedron is like two pyramids that have been stuck together base to base.  It's a symmetrical eight sided shape so the top and bottom are both the same.

Copper oxide which occurs naturally as crystals is a chemical compound of copper and oxygen. The mineral cuprite is a copper oxide.  In the following image the octahedron shaped crystals are cuprite. 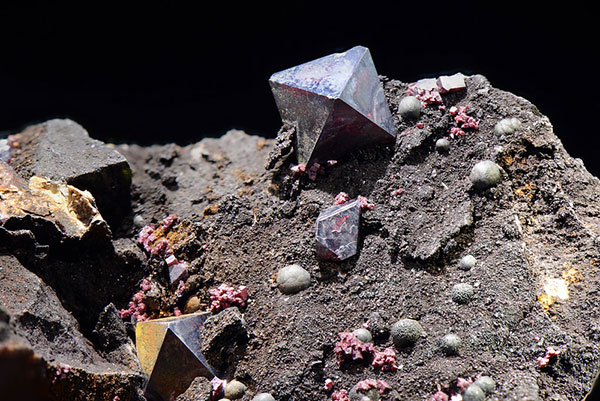 The twinkling effect seen in goldstone is caused as light reflects off the copper crystals.

Although goldstone is best known as an orange-brown coloured stone it can also be navy blue and very occasionally green.  The glass used in the production of the orange-brown stone is clear.  The colour comes from the copper.

In green and blue goldstone coloured glass is used.  The copper is also replaced with another mineral, usually cobalt for blue goldstone and chromium for green.

The sparkling effect in blue goldstone can be particularly impressive.

The most famous story about how goldstone came about is a dubious tale which gathered momentum through plagiarism.  As a result it's now widely believed to be factual.

The real story behind the production of goldstone is quite different but just as interesting.

The myth says goldstone came about "by chance" when glass producing monks in Venice accidentally dropped a jar filled with specs of copper into a vat of molten glass.  Once the glass solidified it had a fascinating spangly or glittery appearance.

The accident led to the new material being named avventurina from the Italian word "disavventura" meaning "mishap" or "misadventure".

Depending on the reference you read, the incident is said to have taken place at some point during the 13th, 17th 18th or 19th century.

Whilst it's well known that an early glass maker from Murano (a group of islands in Venice famous for glass making) attempted to imitate the minerals agate and chalcedony there's no evidence to suggest he produced the material known today as goldstone.

Factual articles that have been written suggest goldstone was created by Vincenzo Miotti a physicist and astronomer born in Murano in 1712.

The exact formula he used was not disclosed until his wealthy glass-making family stopped producing glass.  Their reason for revealing the formula is believed to have been to kick-start the tradition of manufacturing goldstone once again in Venice.

In the 1860's a new formula was created based on a recipe compiled by French chemist Théophile-Jules Pelouze.  In 1894 Henry Stephens Washington visited a glass making factory in Murano and subsequently wrote the following;

Having been given some goldstone, he went on to write an account which included specific details about the copper crystals used in its production.

Goldstone was once again discussed in 1876 by French writer Louis Dieulafait.  With regards to the material referred to as aventurine he writes;

For several centuries Venice has had the monopoly of the fabrication of aventurine; and even now, it is a Venetian artist, Bibaglia, who furnishes to commerce the artificial aventurine that is most highly prized. Aventurine is a glass the base of which is soda ash, lime, and magnesia, coloured yellow by oxide of iron, and holding in suspension a large number of small particles of oxide of copper.

The distribution of these particles in a regular manner through the whole vitreous mass appears to be the chief difficulty in its manufacture. The dexterity requisite to accomplish this must be very difficult to attain, for the profits realized from the manufacture of aventurine are remarkably large.

According to its quality the artificial gem sells for $5 to $15 the pound, while the raw materials that enter into the composition of a pound of it are certainly not worth a quarter-dollar. French chemists--M. Hautefeuille in 1860, and M. Pelouze in 1865--have published processes by which productions have been obtained equal to that of Venice, and, in the latter case, perhaps superior.

The new aventurine of M. Pelouze has a beautiful lustre, and a hardness exceeding that of glass and ordinary aventurine. It is obtained by melting together 250 parts sand, 100 parts carbonate of soda, 50 parts carbonate of lime, and 40 parts bichromate of potassium. It will be seen that by this formula the spangles with a basis of copper are replaced by spangles with a basis of chrome. 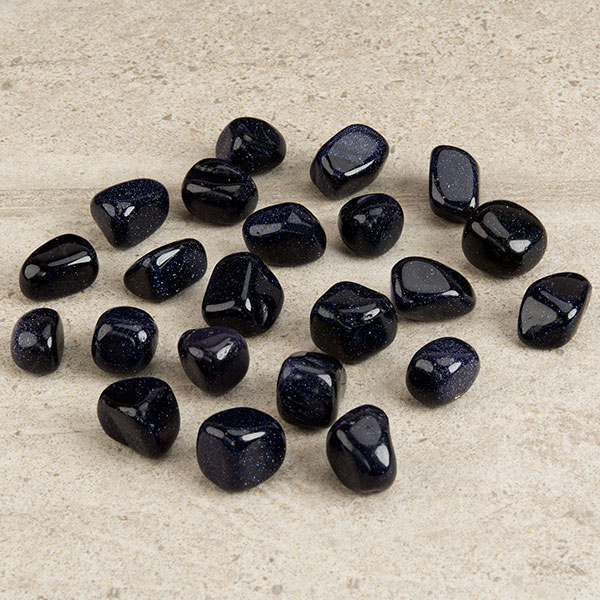 Aventurine which is a variety of quartz is believed to have been named after goldstone.  This is because it also exhibits a sparkly appearance caused by the presence of minute inclusions of other minerals.  This optical phenomenon is known as aventurescence.

The cuprite crystals in our second picture are courtesy of Stan Celestian.  The blue goldstone tumbled stones are from our collection. Both pictures are clickable.