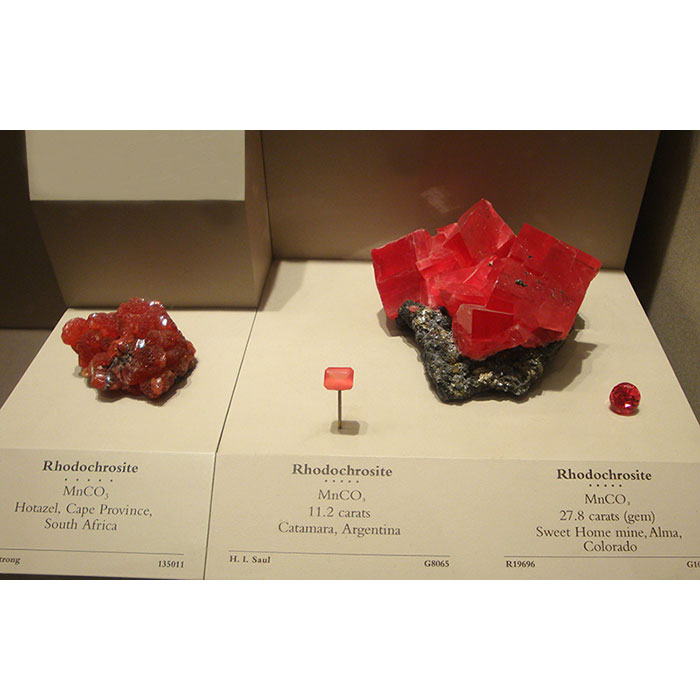 Rhodochrosite is a light pink to deep red coloured mineral that often forms in silver mines.  It occurs in fractures and cavities of certain rock types and can also be found as stalactites and stalagmites.   Opaque material is usually characterised with white streaks of calcite or concentric bands.  These attractive patterns along with the stone's colour make this type of rhodochrosite easy to identify.

Well-formed translucent crystals of rhodochrosite are extremely rare.  Their colour can vary from raspberry red to varying shades of pink.  Although the colour of rhodochrosite is caused by impurities of manganese, calcium and iron are also frequently present.

Rhodochrosite became popular as an ornamental stone during the 1930's.  It followed the discovery of some fine grade material in Argentina.  It was another ten years before this pinkish red stone took off and started being used as a gemstone.

Despite being widely used for decorative purposes rhodochrosite is soft and fragile.  These properties make cutting and polishing difficult. This is further complicated by the fact that rhodochrosite has perfect cleavage.  Mineral cleavage is the way a mineral breaks along structural planes of weakness. Cleavage planes are the lines of weakness within the structure of a crystal.

On Mohs scale of mineral hardness rhodochrosite grades 3.5 to 4. 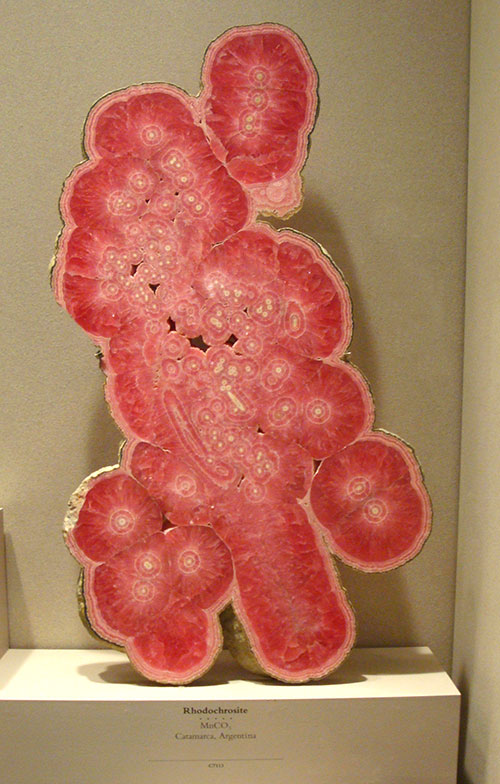 The Meaning of Rhodochrosite?

The meaning of 'rhodochrosite' comes from the Greek 'rhodon' meaning 'rose' and 'chroma' meaning 'colour'.

Rhodochrosite has been mined in the Capillitas mine in north eastern Argentina since the times of the Incas.  It was once known as Inca Rose.  This location is the only place in the world where gigantic stalactites have been found. Measuring up to half a metre in diameter and three metres in length, the inner colour is only revealed once the stalactite has been cut.

Being situated at a height of 10,000 to 11,500 feet makes access extremely challenging.  Exceptionally beautiful deep crimson red coloured crystals have been found in the Capillitas mine.  Some of these rival material from other world renowned deposits.

The Sweet Home Mine in Colorado produced some of the world's finest rhodochrosite crystals.

Opened in 1873 it was originally a silver mine although not very successful.  By the 1800's much of the rhodochrosite which had been mined there was on display in museums.

The Sweet Home mine closed as a silver mine in 1893.  It reopened in the 1920's solely for the purpose of mining rhodochrosite.  Some of the most beautiful crystals ever to have been found were subsequently excavated but the mine is now closed again.

For about ten years during the 1990's it produced countless extraordinary specimens.  Rhodochrosite from the Sweet Home mine is revered by mineral collectors around the world.

The Denver Natural History museum is home to the Alma King.  Believed to be thirty million years old it's the largest rhodochrosite crystal ever to have been found.  It was discovered in the Sweet Home Mine in August 1992.

Rhodochrosite was named as the state mineral of Colorado in 2002.

This popular mineral can be found in a number of countries including Peru, Poland, Canada, Argentina, Mexico, U.S.A and Namibia.

The healing properties of rhodochrosite can be used to enhance confidence, dissipate anger and release tension caused by anxiety.  It has the ability to relieve all areas of the body that store tension and stress.  It provides love and balance and encourages the truth about yourself and others.

A great stone for relationships, it promotes trust and a positive attitude towards life.  It's particularly beneficial for those who struggle with feeling loved.

The healing properties of rhodochrosite are gentle and work slowly.  When a single rhodochrosite crystal is used for meditation it can enhance feelings of calmness and relaxation.

Rhodochrosite can attract a companion who's open and honest.  It teaches us to deal with difficult situations especially relating to the heart.  Associated with the heart and base chakras, it brings repressed feelings to the surface so they can be released through positive energy.

A stone of truth rhodochrosite encourages honest feelings to be spoken about yourself and others but in a gentle manner.  It helps confront irrational fears, paranoia and soothes emotional stress. 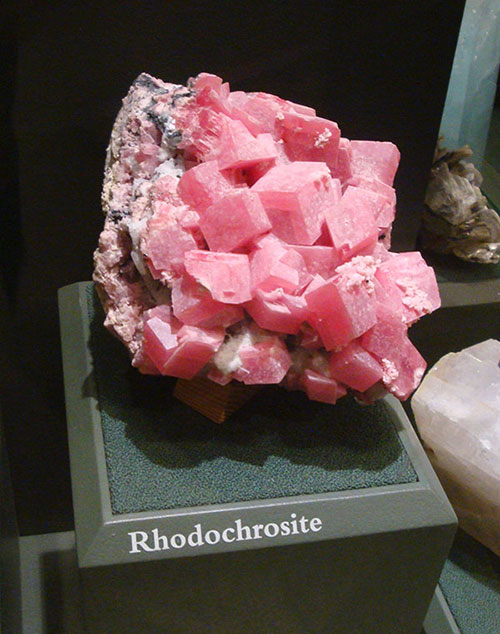 All three rhodochrosite pictures in our article are photographs taken by Stone Mania.  The rhodochrosite is housed in the Smithsonian National Museum of Natural History, Washington D.C.  The photos are clickable and redirect to the original non-compressed image.