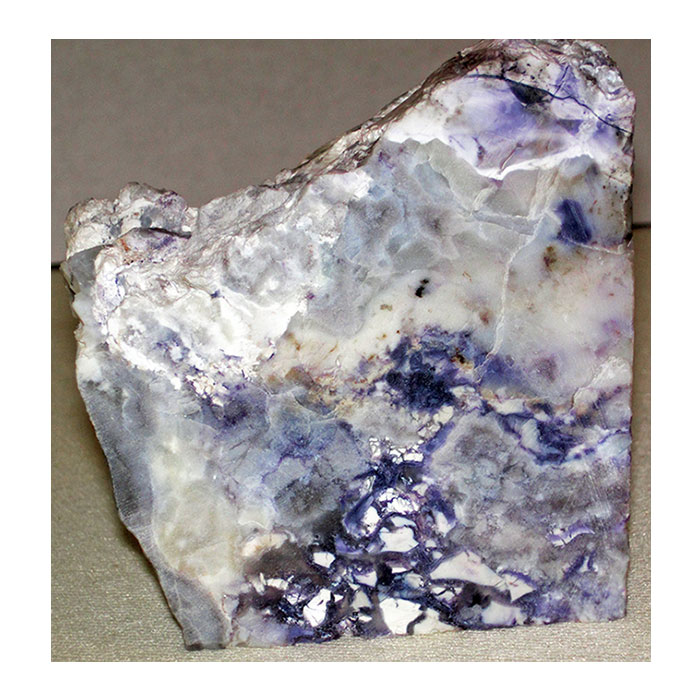 What is Tiffany Stone?

Tiffany stone is a rare type of rock made up of several different minerals.  This means it's a rock not a mineral.

To be more precise it's a mineralised nodule found in just one location, the Sevier Desert, Western Utah (USA).

The nodules were once impregnated by ground water rich in natural minerals.  These impurities are the reason for the stone's striking colour.

Tiffany stone is made up of several different minerals.  These can include quartz, fluorite, dolomite, rhodonite, beryllium and manganese oxides.  The black colour comes from manganese oxides whilst white, yellow and pink comes mainly from beryllium. Blue and purple comes from fluorite.

Tiffany stone is sometimes referred to as bertrandite which is not accurate.  Bertrandite is a mineral in its own right but is present in tiffany stone.  It's a primary source of a highly sought after chemical element called beryllium.

Vast quantities of tiffany stone are crushed up to extract the smallest amount of beryllium.

Being graded 4 on Mohs scale of mineral hardness means tiffany stone is quite soft.  It's widely used for cabochons because its colour and markings make it ideal for jewellery.

Despite extensive research we cannot find any factual information to explain how the name tiffany stone came about.  Many articles state that it's linked to tiffany glass.  Some larger slabs of tiffany stone are said to have a similar appearance to tiffany glass lampshades.  Several other articles claim it was named after the daughter of the person who found it.

Whatever the reason for the name, as tiffany stone gained popularity and started being photographed and written about, the name would have become too difficult to change.

Tiffany stone is known by several different names some of which include ice cream opal and opalised fluorite.  The latter from a scientific perspective is a more precise description of what it is.

Where is Tiffany Stone Found?

The primary deposit in Utah where tiffany stone is found is in the Topaz-Spor mountains.  The area where the material is found is no longer accessible to the public and hasn't been mined for many years.

The Spor Mountain mining district as the area is known is the world’s premier producer of beryllium.  Spor Mountain is known for its abundance of other minerals including the incredibly rare red beryl, opal, hematite and topaz.

The only tiffany stone that's now available is in the form of cabochons.  Anything else is incredibly difficult to find.  Sadly all we now have in our collection are a very small number of pendants.

The picture at the top of our article is courtesy of James St.John.  It's clickable and redirects to the original non-compressed photo.