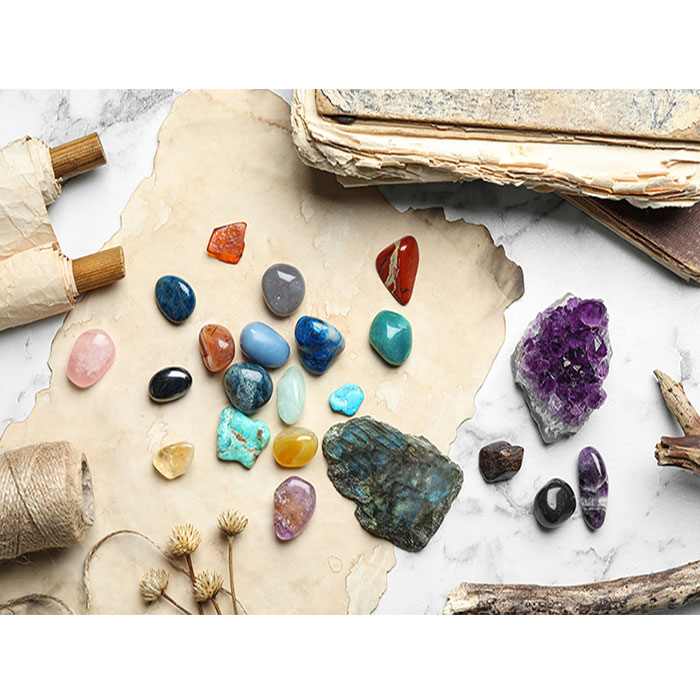 Man's Fascination with Rocks and Minerals

The rocks and minerals we enjoy today are the result of a geological process that began with the formation of Earth some 4.5 billion years ago.

Samples taken from three geographic regions confirm their use for personal adornment can be traced back at least 100,000 years.  Tests have confirmed beads created from mollusc shells are likely to have been strung for the purpose of being worn.

Rocks used for art specifically in Africa have also been dated back 30,000 years.

Throughout history rocks and minerals have been a source of intrigue and fascination.  In addition to art and jewellery they've been used as tools, carried as talismans, carved into luxury objects and have long been associated with status, wealth and power.

The belief they hold magical powers or healing properties is well documented.  Stories and myths associated with certain stones have been passed down from one generation to the next.

Today rocks and minerals are widely used to promote health and well being.  When used for their metaphysical properties the word 'crystals' is often used.  Although crystal healing is looked upon as a pseudoscience, it's hugely popular around the world.  In recent years the market for 'crystals' has exploded and is now a multi billion dollar industry.

The lure of rocks and minerals is universal and common to every human being on the planet.  Despite their widespread use a great deal of confusion exists regarding the difference between a crystal, rock and a mineral.

These four words are often used interchangeably but each one represents a naturally occurring solid that's slightly different. Use of the word 'crystals' as a blanket term for all three has led to even more confusion. 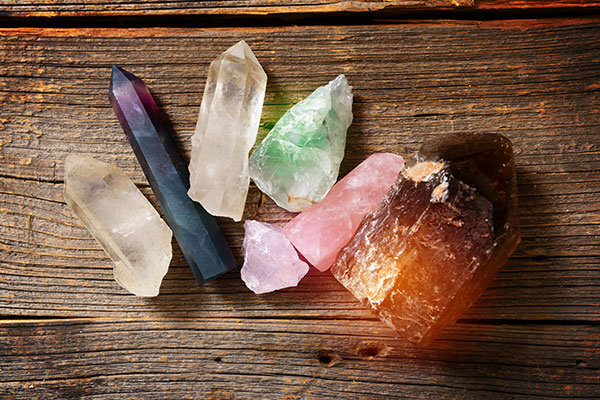 When used correctly the word 'rock' describes a naturally occurring solid made up of one or more minerals.  Rocks tend to be quite hard hence the idiom "hard as a rock".

The three main classes of rocks are igneous, sedimentary and metamorphic.  All three form through different geological processes.

Minerals form through a geological process.  They're naturally occurring solids with a specific chemical composition and distinctive internal crystal structure.

Chemical composition refers to the identity and number of chemical elements in a compound. For example water (the compound) is made up of hydrogen and oxygen both of which are chemical elements.

A substance with an internal crystal structure is made up of crystals.  A crystal is formed from a highly ordered repeating arrangement of atoms.

The study of crystals is crystallography, rocks is petrology, minerals is mineralogy and gemstones gemmology. Geology is the study of the Earth, its history, the rocks of which it's constructed, their structure, where they came from, how they have changed over time and how they continue to change.

Definition of a Gemstone

When a piece of rock or mineral is cut and polished mainly (but not always) for personal adornment, it becomes known as a gemstone.

For a material to be officially classified as a gemstone it must have certain attributes.  The most important is colour although some are colourless.  Durability, beauty and rarity are the other primary characteristics that make a gemstone different from an ordinary stone.

Durability encompasses hardness, toughness and stability although the difference between toughness and hardness is often misunderstood.

Most fine gemstones are cut from the crystals of minerals. Examples include ruby, topaz and citrine. Others are cut from an aggregate which means crystals have grown together as one large mass. An example could be malachite or turquoise.

A crystal is a naturally occurring inorganic solid made-up of a highly ordered arrangement of atoms.  These form a repeating three dimensional rigid pattern known as a crystal lattice.  Inorganic means not formed from living matter.

A typical crystal contains billions of atoms.  The shape they form is known as the crystal structure.  Their formation and subsequent growth is called crystallisation.

The crystal structure for each mineral is always exactly the same.  Should it change it will lead to a different mineral being formed.  Pyrite and marcasite have an identical chemical composition, both are iron sulphide minerals (chemical compound of iron and sulphur).  The one that forms depends on how it crystallises or in other words, its crystal structure.

Another example is calcite which has more crystal structures than any other mineral.  Its chemical composition is identical to aragonite yet they're two different minerals.  A mineral's crystal structure serves as a tool for identification because it's unique and specific to each variety.

The crystal structure in a quartz crystal will always be exactly the same.  It's made up of one atom of silicon and two of oxygen hence the chemical formula is SiO₂.  Should it contain any other elements it wouldn't be quartz.

The following diagram shows a repeating arrangement of atoms in a crystalline solid. 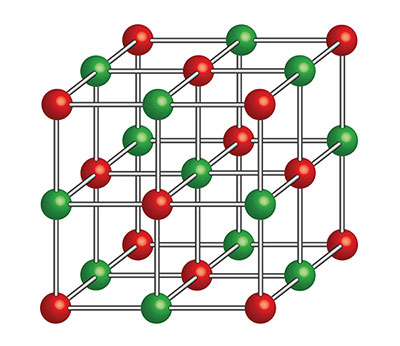 Where crystals are present in a naturally occurring solid the material is classed as a mineral.  Some crystals are difficult to see either because of their size or because they're tightly interlocked or fused together.  Others can be large enough to be seen with the naked eye.

Crystals vary in size from a few millimetres to several metres.  Shapes are defined by the crystal structure.  Cube shaped crystals are one of the simplest and most common shapes found in crystals and minerals.  They can often be seen in pyrite and fluorite.

Any naturally occurring substance with a mass is made up of matter.  The three states of matter are solids, liquids and gases.  All three are made up of atoms but the specific arrangement is different for each.

For a solid to be crystalline it must have a highly ordered repeating arrangement of atoms.  If the arrangement is disjointed or random an amorphous or non crystalline solid will be formed.  Amorphous which comes from Greek means 'without definitive shape or form'.

Obsidian which is a volcanic glass is an example of an amorphous or non crystalline solid.  Another is man-made glass which is produced by heating sand.  Sand is silicon dioxide which is found most commonly in nature as quartz.

Crystals grow when liquids cool and solidify.  If they cool too quickly there's not enough time for atoms to arrange themselves in an orderly repeating pattern.  The solid that subsequently forms will therefore not be crystalline.  Obsidian forms in this way from lava that cools rapidly on the surface of Earth.

Crystals can also form as a result of precipitation from water.  Water can only hold a certain amount of dissolved minerals and salts. As the quantity of the mineral increases, it can no longer remain dissolved in the water.  The particles then come together to form a solid.  An example is halite otherwise known as rock salt.

Whilst some crystals grow quickly others can take thousands to millions of years.  The slower the cooling process the larger the crystals.

Impurities within a crystal will often be partly or fully responsible for a change in colour.  Heat is often a contributing factor because it alters a mineral's chemical composition.  Rocks minerals and gemstones have been heated by man for thousands of years.

A chemical element contains just one type of atom.  Minerals made up of a single element (one type of atom) are known as native elements.  Examples include copper, carbon, gold, titanium and silver. 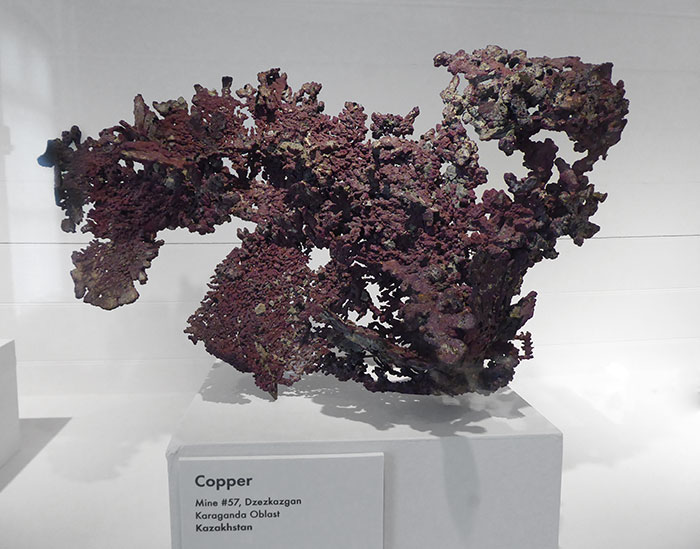 Definition of a Rock

Rocks are usually made up of several different minerals.  Approximately 5,000 minerals exist on Earth yet most rocks are formed from a combination of some of the most common.

Granite which is a common igneous rock is made up of the rock-forming minerals quartz, mica and feldspar.

Even though the minerals that make up rocks are crystalline, the rock itself is not made-up of crystals.  Although often described as a mineral lapis lazuli is a rock.  This is because it's made up of many different minerals.

One way to explain the nature and composition of a rock is to think of it as one solid mass made-up of individual grains.  Imagine the grains have all been compacted tightly together.  Now think of each one as a separate mineral.  The nature of each grain and the way it fits together with the other grains defines the rock's hardness.

Rough grains which fit snugly together restrict the amount of room left available for moisture.  This type of rock will therefore be hard and non porous. Finer grains are likely to have a more rounded shape hence won't lock together as tightly.  That leaves space for moisture and air so the rock will be softer and more likely to be porous.

Sedimentary rocks are made up of sediment which has come together under water.  Layers gradually build up over time and with the resulting pressure become compacted together.  Through the process of cementation the mass slowly transforms into rock.

An existing rock which undergoes a profound transformation caused by heat or pressure is known as a metamorphic rock.  Minerals are only stable within a certain range of temperatures and pressures.  Once outside of that range they break down and combine with other minerals within the existing rock to form a new mineral.  The process known as metamorphism generally takes place deep within Earth's crust.

Marble is a metamorphic rock that began life as limestone. 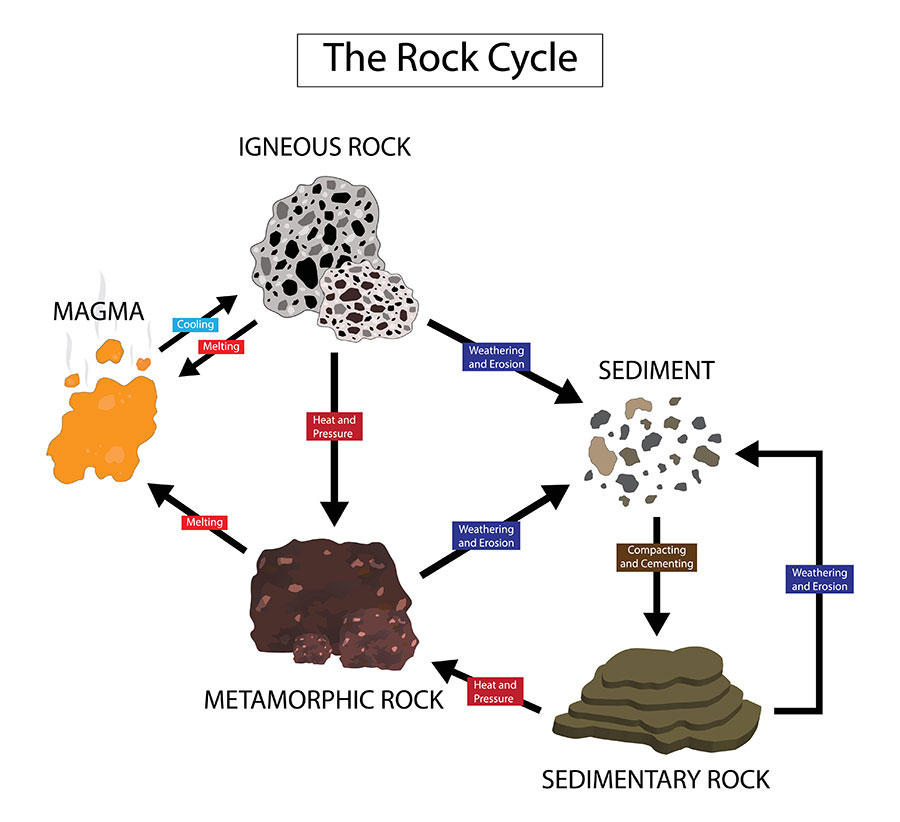