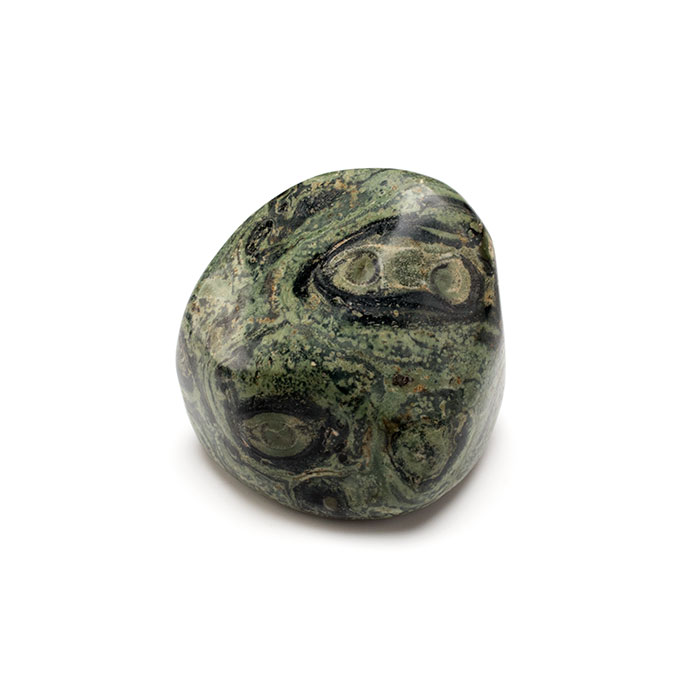 Kambaba jasper from Madagascar is also known as crocodile jasper and kabamba stone.  Much of the geological information online about this relatively rare material is vague and inaccurate.

Although often referred to as a mineral, kambaba jasper is actually a rock.  Like all varieties of jasper it's not made up of one single mineral but of several.

I was first shown kambaba jasper whilst at one of my suppliers in India in 2002.  I was told this distinctive stone was called star galaxy jasper.  Upon returning home I discovered that was a trade name used by gem cutters in Jaipur.

Outside of India it's also sometimes known as green stromatolite jasper.  A stromatolite is a rock-like structure that forms in shallow waters from the build up of a group of bacteria called cyanobacteria.

Also known as blue-green algae, cyanobacteria have a fossil record which dates back almost three and a half billion years.  It's for this reason that some claim kambaba jasper is more than three billion years old. 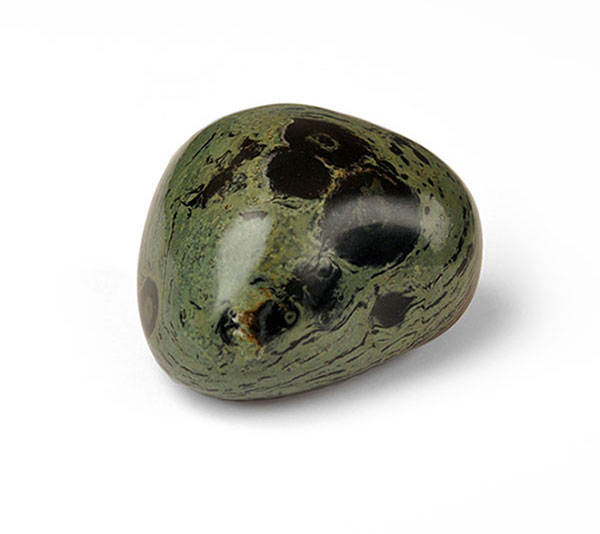 Having researched and written about rocks and minerals for more than twenty years, I'm aware not everything you read online is accurate.  The main reason for this is because so many articles are repeatedly plagiarised.  Before republishing an article that has been copied, few people check for accuracy.

Whilst doing research on kambaba jasper not one article I read gave detailed or correct information about its geological makeup.  Nor did it give any details regarding where in Madagascar it was found.

I eventually stumbled across a relatively old thread in an online forum.  It had been started by someone who asked whether kambaba jasper was a stromatolite.  The replies which covered several pages featured arguments both for and against.

Having read the entire thread carefully, I found this comment particularly interesting;

"I’ve been sitting on my hands trying to stay out of this debate. There's a lot of hokum and claptrap kicking around concerning this material which has created considerable confusion. Kambaba Jasper is an invented name for what was hailed in the fringes of the lapidary world as a new material but isn’t.  It's a relatively newly-discovered exposure of an already known material. It has been studied by experts and isn’t stromatolitic or even sedimentary, at least not in the samples that have been analysed.

The EPI (Institut für Edelstein Prufüng) or Institute for Gemstone Testing in Germany published a detailed report in one of its bulletins.  Unfortunately they're only available to members and only in German. Nevertheless paraphrasing from their findings; thin-section and X-Ray diffraction analyses have shown the kabamba material is not a type of jasper at all, it is instead volcanic.  The green groundmass is composed mainly of quartz, pyroxene (aegirine) with orbs of alkali feldspar embedded with streaky aggregates comprising tiny needles of amphibole (riebeckite to pargasite).

The formation is not fully understood but is most likely to be a volcanic rock that has been “overprinted” by a weak metamorphism.

In mineral composition it’s very similar to a rock originating in Mexico that’s generally referred to in the lapidary world as “Eldarite”.  The colour is the reverse of the Madagascan material. Eldarite has a dark groundmass and pale orb-like patterns whereas Kabamba Jasper has a pale groundmass and dark orbicles.

Eldarite is also known in America as “Nebula Stone” because after being polished, the patterns resemble nebulae in outer space. The two rocks are nevertheless sufficiently similar from a mineralogical perspective that the EPI recommends the names “Eldarite” and “Kambaba” (with its several spelling variations) should be regarded as synonyms. They also advise the name Kabamba Jasper should be replaced by Kabamba Stone." (the original thread) 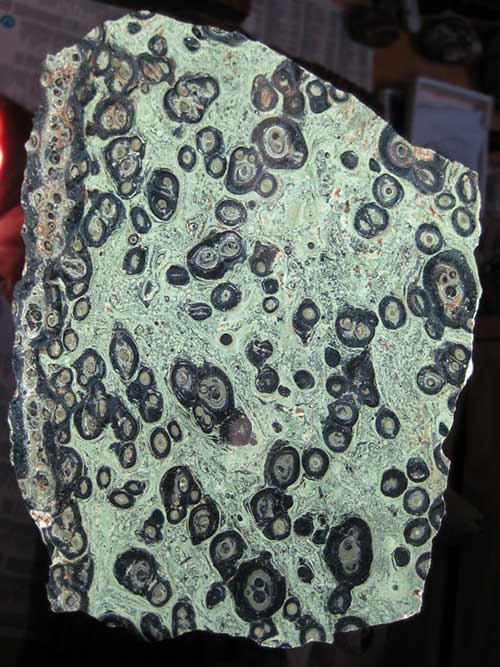 The thread had been closed for some time so I posted a question on another mineralogical forum.  I asked if anyone could shed any light on exactly what kambaba jasper or kabamba stone was.

The most interesting response was from mineralogist and author Marco Campos-Venuti.  He said he had spent time working in Madagascar.

He explained the reason for the confusion over whether kambaba jasper is a stromatolite is because two different materials both with similar names have over time become mixed-up.

Kambaba jasper or kabamba as it's known locally comes from a small area in Madagascar called Kabamba.  Located in the central western Bongolava region, the name is sometimes written as Kambaba.

This material is an oncolite stromatolite, a rock-like structure that forms in shallow seas.  It's made up of bacteria which over time has been replaced by silica.

The stone for which it's being mistaken is kabamby ocean jasper otherwise known as ocean jasper.  Like kambaba it's only found in Madagascar.  It was first discovered close to the remote village of kabamby on the north west coast.

A type of spherulitic chalcedony, kabamby ocean jasper forms in a totally different way.  For this reason from a geological perspective it's a different stone. It's neither a stromatolite or even a sedimentary rock.

Kabamby ocean jasper is likely to have been the material that was examined by the Institute of Gemstone Testing in Germany.

Confusion over the names of the two stones, where they're found and repeated plagiarism of inaccurate articles has led to no end of confusion.

Some great photos of both stones and my post in the forum can be found here.  You'll need to scroll right down almost to the end to see Marco's comment and the photos.

With regards to hardness which refers to scratch resistance not toughness, kambaba jasper grades 6.5 to 7 on Mohs scale. In geology hardness and toughness are not the same.

The kambaba jasper stones in our first two pictures come from our collection. The third picture is courtesy of Marco Campos-Venuti. The first photo is clickable and redirects to the original non-compressed image.