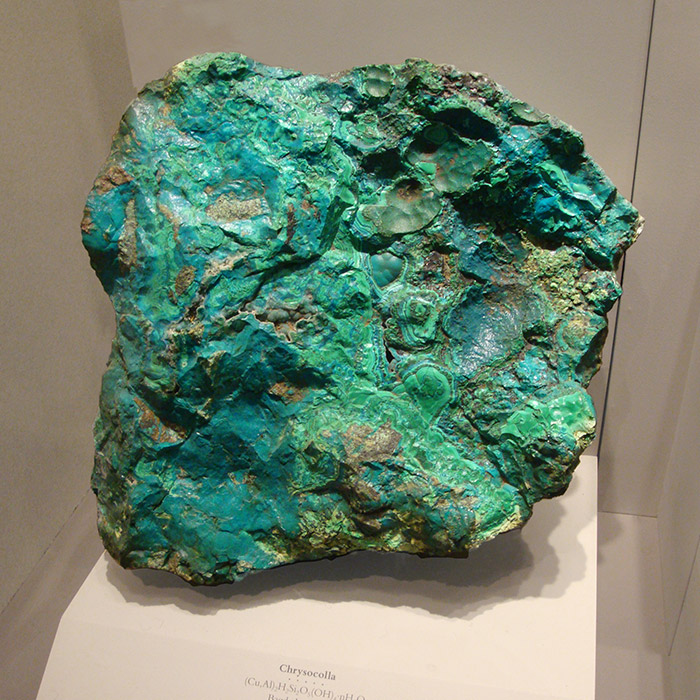 Although very soft in its purest form, chrysocolla is often found with quartz.  The combination of the two minerals makes the stone considerably harder.

Its striking colour is caused by the presence of copper.  Some material when polished can be mistaken for turquoise.

Chrysocolla is widely used as a decorative stone because of its colour and markings.  With it being so soft soft it can be very difficult to work with.  On Mohs scale of mineral hardness pure chrysocolla grades just 2.5 to 3.5.

When combined with quartz it can sometimes be as hard as 7.  As a general rule chrysocolla should always be handled carefully and preferably as little as possible.

Although mined in a number of locations worldwide, large quantities of commercial grade stone comes from Africa particularly the Democratic Republic of Congo.

Chrysocolla is often associated with malachite, turquoise, quartz, azurite and other copper minerals.

The name chrysocolla comes from the Greek word 'chrysos' meaning gold and 'kolla' meaning glue which translates as gold-solder.  When used in ancient texts the word referred to a solder used on gold.  It's not known for certain whether that referred to green copper carbonate which is malachite or blue hydrated copper silicate which is chrysocolla.

Despite tests being carried out on gold artefacts, there is still no definitive answer.

The ancient Greek philosopher Theophrastus wrote about chrysocolla in his treatise Theophrastus on Stones.  It's believed chrysocolla was a term used to describe all bright green copper minerals including malachite.

He wrote "chrysokolla can be found in large quantities in gold mines and even more in copper mines".  He also said it can be found in "kyanos" which in Greek means "blue copper carbonate”.  That's a geological description of the mineral azurite which confirms malachite was part of the group of minerals known as chrysokolla.

In later writings by Roman author and naturalist Pliny the Elder, he says the "ancients used the name chrysocolla more as a reference to the stone we know today as malachite".  He goes on to say it should not be confused with modern chrysocolla.

He states "gold is dug out of the earth and in close proximity to it chrysocolla, a substance which may appear all the more precious and still retains the name which it borrowed from gold".

Pliny talks about it being a liquid found in mine shafts that flows through the veins of gold.  He describes it as being a kind of slime which hardens and becomes like a stone during the cold winter.  He says the finest material can be found in silver mines and then copper mines. 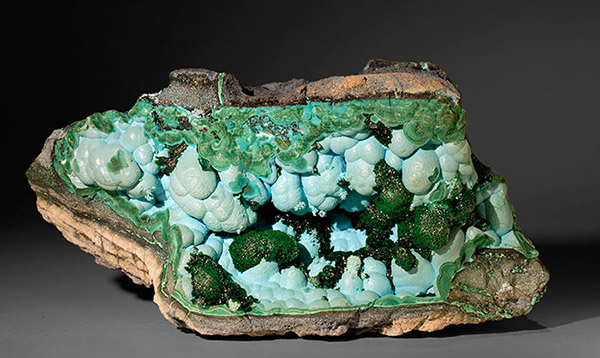 The dust from many minerals whether inhaled or ingested is toxic.  The worst offenders are those which contain copper oxide.  Turquoise contains around 9.8%, chrysocolla 45% and azurite malachite 70%.

When cutting and polishing these materials protective breathing equipment must be used.  Once polished these stones are completely safe to handle.

Minerals containing copper should not be used as an elixir.

When used for its metaphysical healing properties chrysocolla is said to provide inner strength during periods of stress or grief.  It can also promote harmony and eliminate negativity from an environment or person.

The chrysocolla in the photo at the top of our page is on display in the Smithsonian National Museum of Natural History, Washington D.C.  Photo by Stone Mania.

The chrysocolla tumbled stones are from our collection.  The next photo is malachite on chrysocolla from the Democratic Republic of Congo. Photo courtesy of Stan Celestian.