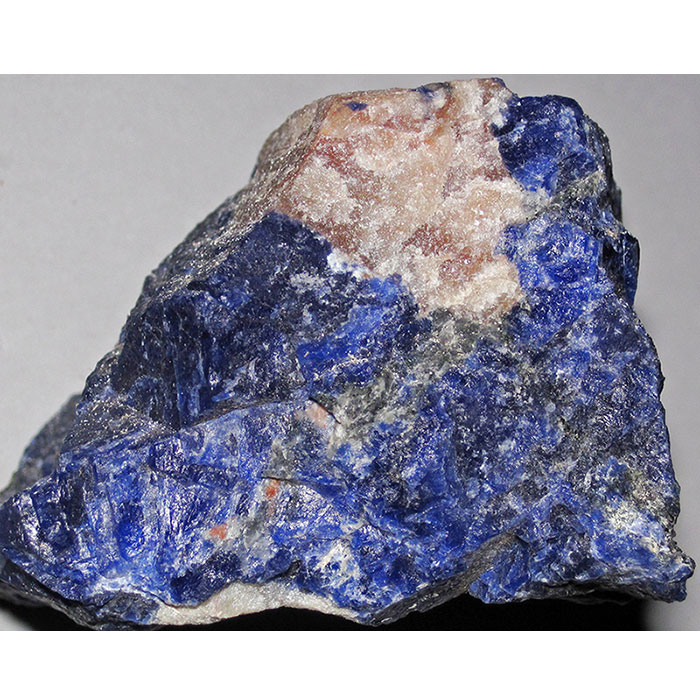 The mineral sodalite can sometimes be mistaken for lapis lazuli.  The easiest way to tell one from the other is to first check the weight.  Sodalite is much lighter than lapis.

The other major difference is you'll never see speckles of pyrite in sodalite.  Pyrite is a brassy yellow coloured mineral also known as fools gold.

Another significant difference although it's not something you'd be able to see, is sodalite is a mineral whereas lapis lazuli is a rock.

The first notable reference to sodalite was in 1806 during the Napoleonic war.  The stone was identified when a large quantity was sent from Greenland to Denmark.

During the journey it caught the attention of the British who had it examined by Scottish chemist Thomas Thomson.  He subsequently named the mineral sodalite.  The meaning of the name relates to its high sodium content.

Sodalite remained relatively unknown until 1891 when huge deposits were discovered in Bancroft Ontario.  In 1893 several stones from this region went on display at The World's Columbian exposition in Chicago.

Although sodalite is believed to have been a relatively new find, we have seen articles which state the stone was being used thousands of years ago by ancient civilizations in South America.

In the 1870's a German geologist found blue beads along with quartz and obsidian arrowheads in the ruins of Tiahuanaco.  This pre-Columbian city sits on Lake Titicaca in Bolivia.  After being analysed the beads were confirmed to be sodalite.

Sodalite stone from Greenland has a very different appearance and is mainly grey or yellow.  Other vibrant colours including blue, white, pink, green and red are also known.

Some varieties fluoresce under UV light whilst others are tenebrescent.  This means they change colour when exposed to sunlight.  Although the exceptional grade of this type of sodalite makes it suitable for polishing, it rarely is because the stone is far too rare.

The varieties of sodalite that exhibit the reversible optical phenomenon of tenebrescence are known as hackmanite.  More recently a deposit with exceptionally fine grade material was discovered in Quebec in Canada.  A few polished stones from this locality are now beginning to appear on the market.

On Mohs scale of mineral hardness sodalite grades 5.5 to 6.  When used as a gemstone it's cut as a cabochon and takes on a high polish.

Although best known for being a navy blue coloured stone it can occur in several other colours.  The blue stone is often included with white streaks or patches.  This greyish-white colour may come from calcite, feldspar or possibly both.

A stone that's marketed as sunset sodalite features colourful orange inclusions.  These may also come from calcite but could also be feldspar.  It's also possible the colour may come from some kind of staining or oxidation.

Sodalite has no real use in industry and is mainly used for decorative purposes and for its healing properties.</p 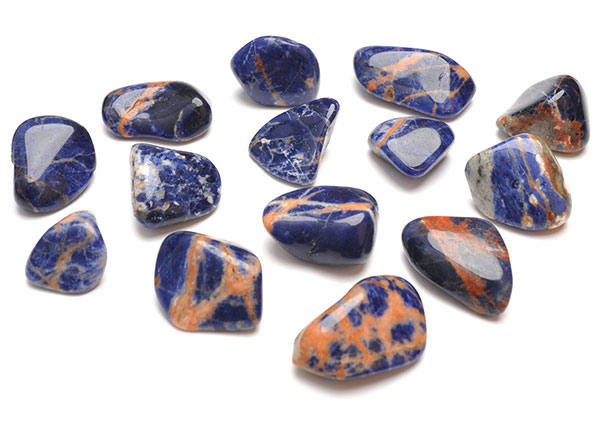 When used for its metaphysical healing properties sodalite is a stone of endurance.  It can be used to maximise energy even during the most challenging situations.

It increases confidence and enhances creativity.  Sodalite helps alleviate fear, brings clarity of mind and offers psychic protection.  When used during meditation it deepens the state and enhances the experience.

Sodalite drives towards finding the truth.  It makes it possible for you to remain true to yourself and to fight for what you believe in.  It's reported to cleanse the surrounding environment to ease stress caused by electromagnetic pollution.

For those who work with people in groups, sodalite brings harmony and solidarity.  It encourages trust and friendship between those who are present.

Although the healing properties of sodalite are powerful, crystals work slowly and gently.  It enhances self esteem, can remove pessimistic thoughts and replaces negative feelings with positive energy.  Working with sodalite can help you reach your full potential.

It's widely reported that in 1901 during a visit to Canada the Prince and Princess of Wales who later became King George V and Queen Mary fell in love with sodalite.  They subsequently had one hundred and thirty tons of stone shipped to the UK.

Not long after their visit to Canada, the deposit where sodalite was mined became known as the Princess Sodalite Quarry.

The Princess of Wales subsequently gave the future King George V a letter opener with a sodalite handle and gold blade.  As well as featuring other crystals it also had a crown at the top of the handle.

A note from her records shows that whilst still Princess of Wales, Queen Mary also had a pair of urns made from sodalite stone.

The sodalite in the picture at the top of our article is courtesy of James St.John.  It comes from Brazil. The exceptionally rare stones in our second picture are from Greenland.  They're being displayed under UV light.

The tumbled stones come from our collection.  Pictures 1 and 3 are clickable and redirect to the original non-compressed photo.