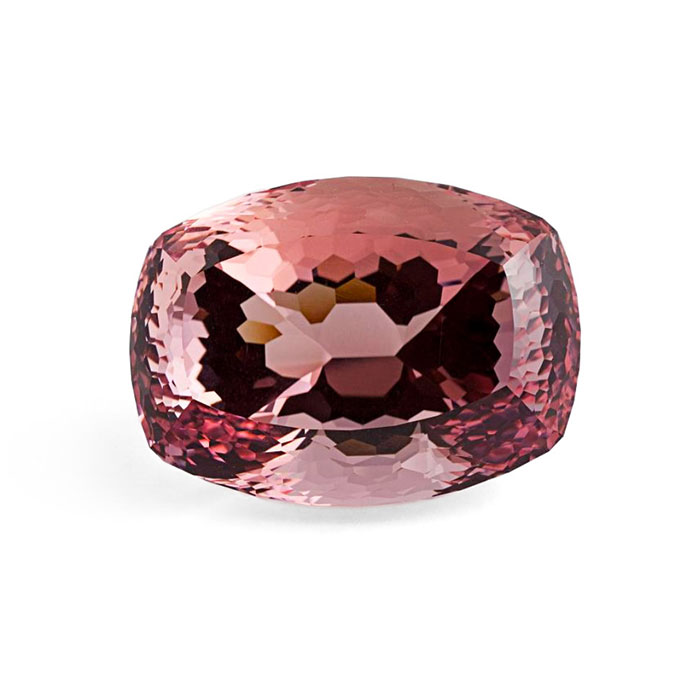 Morganite best known as a pink gemstone is one of the rarest varieties of the mineral beryl.  Discovered in Madagascar in 1910, it named soon afterwards by gemmologist and Tiffany & Co's vice president George Frederick Kunz.

Morganite was named in honour of the American banker J.P. Morgan.  As well as being an avid mineral collector he also donated generously to New York's museum of Natural History.

Morganite which tends to be faceted is mostly used in fine jewellery. "Peach morganite" is a trade name used to describe stones that are more peach-coloured than pink.  The truth of the matter is this is likely to be the natural colour of the stone.  By definition morganite is pink beryl even though the colour may not be that pink.

It's likely this mineral was identified as "pink" beryl after this colour was altered by heating the stone.  It should be remembered it was first marketed by American Jeweller Tiffany & Co who would have been selling it as a gemstone, not a rough mineral. As such it almost certainly would have been heat treated to make the colour more desirable.

Impurities of manganese in morganite are largely responsible for the shade and depth of colour.

As well as Madagascar, this variety of beryl can also be found in Brazil, parts of the USA, Mozambique, Namibia, Afghanistan and Russia.

On mohs scale of mineral hardness morganite grades 7.5 to 8 which is pretty hard.  It must be protected from excessive heat, large temperature changes and bright sunlight to protect the colour from fading. Gemstone hardness should not be confused with toughness.

When used for its healing properties morganite provides relief and a positive attitude during times of stress.  It can also help bring love into one's life and help maintain it as it grows.

The morganite in the picture at the top of our article is on display in the Smithsonian Museum of Natural History, Washington D.C. It's an enhanced cushion cut stone from Brazil that weighs 448.64 carats. The morganite crystals in our second photo are from our collection.