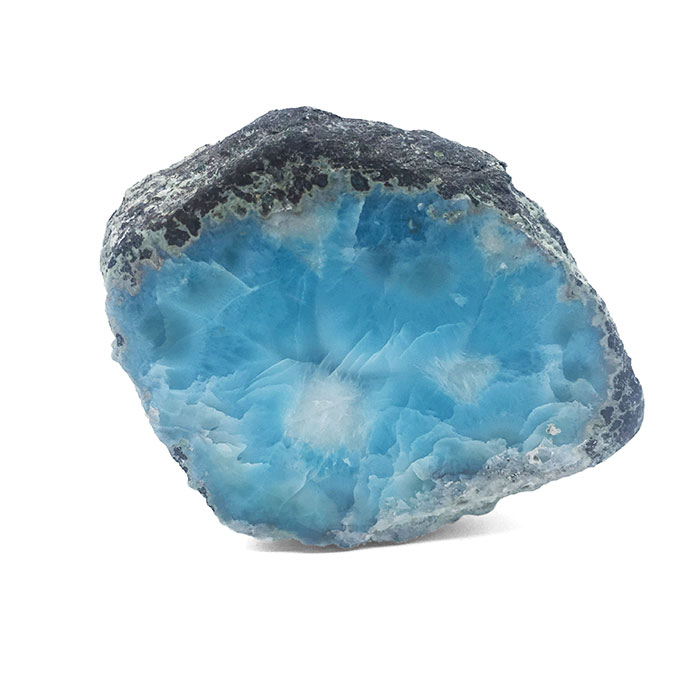 Larimar is a variety of the mineral blue pectolite.  This beautiful stone can only be found on the island of Hispaniola in the Dominican Republic.

The mine is located in a remote mountainous region and it's not known for certain exactly how much is left available mine.

This blue and white stone is sometimes referred to as the 'gem of the Caribbean'.  This is not only because of where larimar is found but also because its colour and markings resemble the Caribbean Sea.

A spiritual master once claimed the islands in the Caribbean were part of the lost continent of Atlantis.  He said one day they would produce a blue stone with the power to heal.  In the belief this was a reference to larimar, the name Atlantis Stone is also sometimes used.

The first official record of larimar was made in 1916.  It's believed the stone is likely to have been known by the Taíno Indians.  They inhabited the islands for a thousand years before Christopher Columbus arrived in the New World.

The registration in 1916 came about when a Spanish missionary looking for gold and other precious materials discovered the mine.  He requested access which was denied and he subsequently returned to Spain.

No further information is available on the mine or the stone until the mid 1950's.

When fragments of larimar washed up on the beach they were collected by inhabitants of a local fishing village.  It was another twenty years before an artist who had been using the stone for his work discovered the source.

It's claimed he named the stone larimar after his daughter Larissa and the Spanish word 'mar' which means 'sea'.

Larimar is only used for decorative purposes.  It grades 5 to 7 on Mohs scale of mineral hardness.

Highly sought after for its metaphysical properties, it can be used to balance extremes of emotion, encourage tolerance, relax conscious awareness and to broaden experience of space and time.

Larimar awakens inner wisdom when moving through periods of stress and change.  It enables challenges to be met whilst staying level headed.  It draws you closer to your soul mate and helps to heal heartache and pain from relationships.

When used in reflexology it pinpoints the site of disease and clears meridians.

Our Collection of Larimar