What is Silicon Dioxide?

Silicon dioxide also known as silica is a chemical compound of two of the most abundant chemical elements in Earth's crust, silicon (Si) and oxygen (O2).  Made up of one atom of silicon and two atoms of oxygen, its chemical formula is SiO2.

Silicon dioxide (oxide means 1 dioxide means 2) is found most commonly in nature as the mineral quartz.  It's present in water, sand, animals, plants and soil.  It exists in several crystalline forms and a number of cryptocrystalline forms.

In its purest form silicon dioxide is colourless and transparent but impurities cause a wide range of colours.

Silicon dioxide is widely used in industry because its melting point is higher than copper, iron and aluminium.  It's widely used for the production of glass, optical fibres and as a raw material in whiteware ceramics, stoneware, porcelain and industrial cement. It's also used in toothpaste because its hardness helps remove plaque.

As a food additive silicon dioxide protects dried foods from moisture and powdered foods from clumping or sticking together. 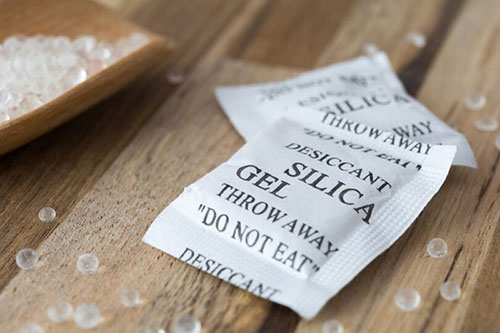