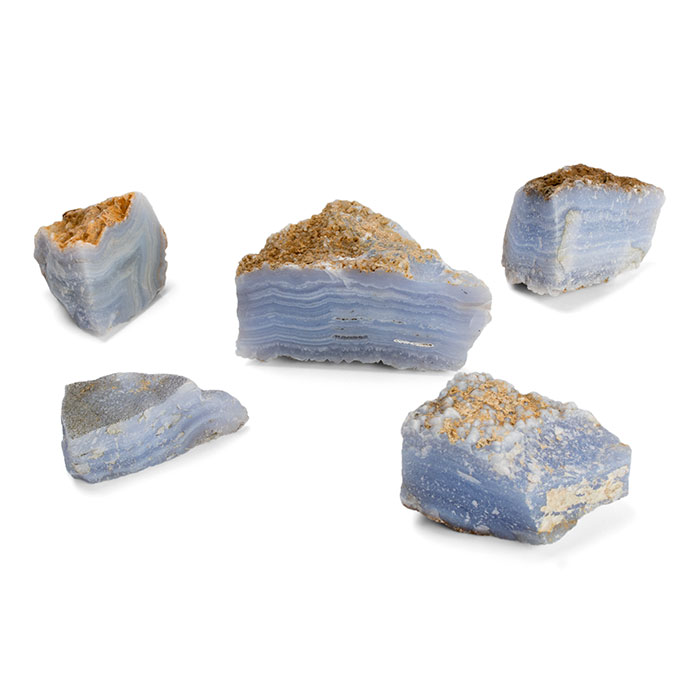 Blue lace agate is a rare variety of the mineral chalcedony characterised by distinctive blue and white wavy bands.  Although some material can resemble blue agate, the two are not the same.

The vast majority of blue lace agate comes from one location in Southern Namibia, Farm 254 Ysterputz, Karasburg West.  Not far from the border with South Africa, this area is incredibly dry and barren and rain is exceptionally rare.  Temperatures by day can be almost unbearable whilst at night it can drop to below freezing.

The deposit where blue lace agate is found is believed to date back approximately 54 million years.

It's synonymous with George Swanson who it's widely reported discovered the mine around 1962.  That's not quite accurate however because it was discovered by Willy Preiss.  Preiss lived some 400 miles away in Namibia's capital Windhoek which made managing operations there very difficult.

When George Swanson was given the opportunity to run the mine from his home in Springbok (South Africa) which is much closer, he worked hard to make it a success.

In 1969 a deal was struck and Preiss handed ownership over to Swanson.  The deposit remained under his control and was mined extensively until his death in 2010. 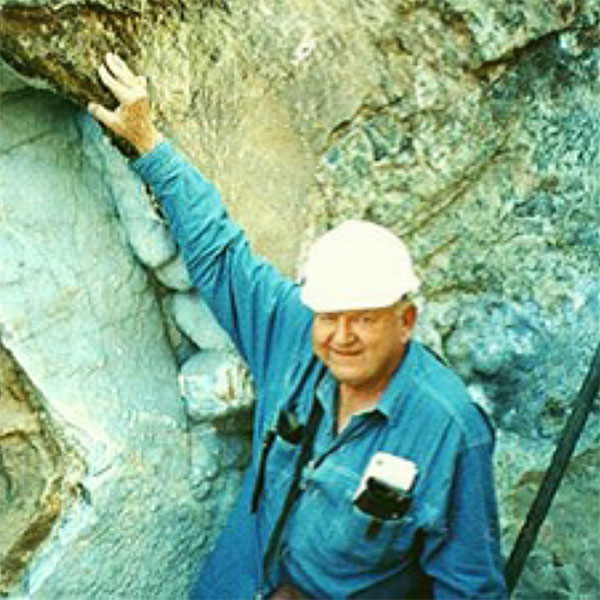 George Swanson. Photo taken prior to 2001.

Mining blue lace agate was never easy.  The stone which is located deep inside a narrow trench was initially extracted by hand.  As recently as 2015 miners were climbing down chain ladders to gain access to it.  After being removed with chisels and jackhammers it was raised to the surface in buckets.  These were attached by chains to a crane at the side of the pit.  For this reason large pieces of blue lace agate are extremely rare.

Mining operations are believed to have started in 1962.  The first official production figures didn't appear until three years later.  For the next fifty years huge quantities of blue lace agate were excavated and traded around the world.

Following his death George Swanson's son took over the business.  Due to lack of interest, poor management or a bit of both, mining operations were dramatically scaled back.  Since 2017 no new material has been mined from Ysterputz on farm 254 and visitor access is forbidden.

The first time I bought blue lace agate for Stone Mania was in Jaipur in India in 2004.  The cabochons which we had mounted as pendants were always popular.

During my first trip in 2010 to buy rocks and minerals in South Africa, blue lace agate was high on my list.  I bought many amazing pieces but with each subsequent trip the amount available steadily decreased.

By 2014 apart from tumbled stones, there was nothing worth buying.  Only then did I learn where it came from.  With George Swanson having passed away mining operations had already been scaled back.

Having recently found a new supplier in South Africa who had a limited quantity of blue lace agate, I asked him about George Swanson and the situation with the Ysterputz mine.  He told me the following story;

"Mrs Swanson was a pioneer in the Northern Cape in the heyday of hunting for minerals.  George followed in her footsteps and developed the industry further.  He had moved with his family to South Africa from America whilst very young but later returned to study agriculture.

Upon returning to South Africa he became interested in minerals and prospecting for rare stones.  The change in direction is likely to have come about because of influence from his mother.

George was one of the founder members of the Cape Town Gem and Mineral Club.  By the time I met him he was already an old guy.  He was a classic cowboy as in he looked exactly how you'd expect a cowboy to look.  He always wore a bolo tie and massive belt buckle both of which had a blue lace agate.  He also wore a large hat.

During the early years he struggled to sell the newly found blue lace agate.  That all changed when a famous celebrity saw one of his polished spheres at the Tucson Mineral show.  They said it looked like the view of Earth from space and the comment put George on the map.

Although he remained in South Africa he took all material mined in Namibia back to his yard in Springbok.  There it was cleaned up and processed before being sold to dealers across the country.  It was also exported around the world.

Visitors were welcome but he wasn't an easy man to do business with.  We stopped by the yard every now and then to see what he had. He was a tough bugger and we paid good money for the stone.  He rarely gave discounts especially to people like us because we only bought in small quantities.  With some haggling we would sometimes get a few cents off in the end if we were lucky.

Many bad things were said about old George but each month he made the long drive to the Cape Town Gem and Mineral Club to sell his blue lace agate.  He was totally committed.  He would also do many of the fairs even if he did sometimes turn up a day or so late.

After he passed away his son Lionel took over the business.  I believe he now lives in the USA. He quickly sold everything off and not much has been heard from him since.

The ownership of the mine is now in dispute between different parties and nothing has been done about it for many years.  On visiting the mine it was really scary, they left things in a terrible state.  Anyone taking over will have huge health and safety concerns to contend with which is likely to make any future operations extremely difficult.

The supervisors who still live there are trying to make ends meet but are not allowed to mine or remove any of the blue lace agate.  That just leaves them with a material known as crazy lace which although quite good, is not amazing.  They're struggling to get by but are coping.  Later this year there's a field trip in the area and a few of the guys will no doubt pop in to make sure they're okay.

The blue lace agate from Ysterputz is really fantastic.  It cuts and polishes very well, the colour is deeper than the Zambian or Malawi material and in terms of final finish when polished, it's much better than anything from the other sources.

Good old George, a tough bugger but a character none of us will forget." 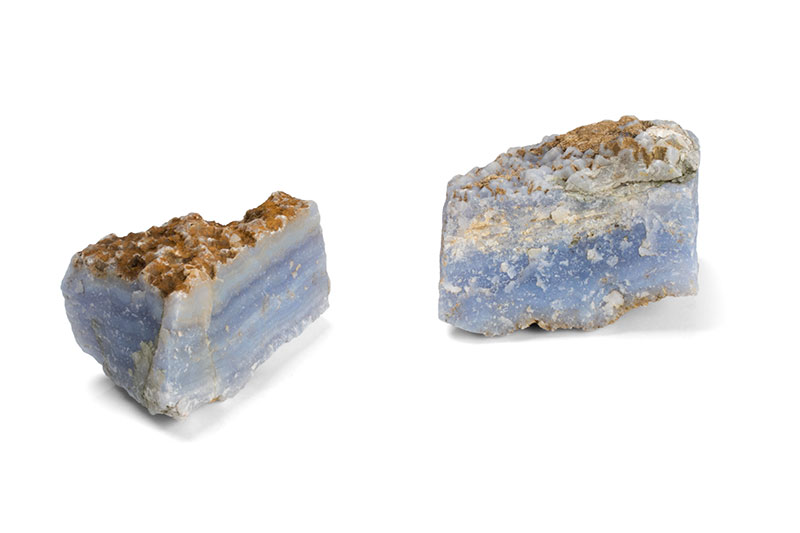 The End of the Road

The blue lace agate I received was really outstanding and I couldn't have been happier.  The supply has now dried up completely and there's almost nothing left to buy from Ysterputz.

Namibian Blue Lace is an amazing website that features many incredible photos.  It's only for information purposes so stone cannot be bought online or from the owner directly.

The photo of George Swanson was taken prior to 2001. The blue lace agate is from Farm 254 Ysterputz Karasburg. All of the stones pictured are from our collection. Photos are clickable and redirect to the original non-compressed image.