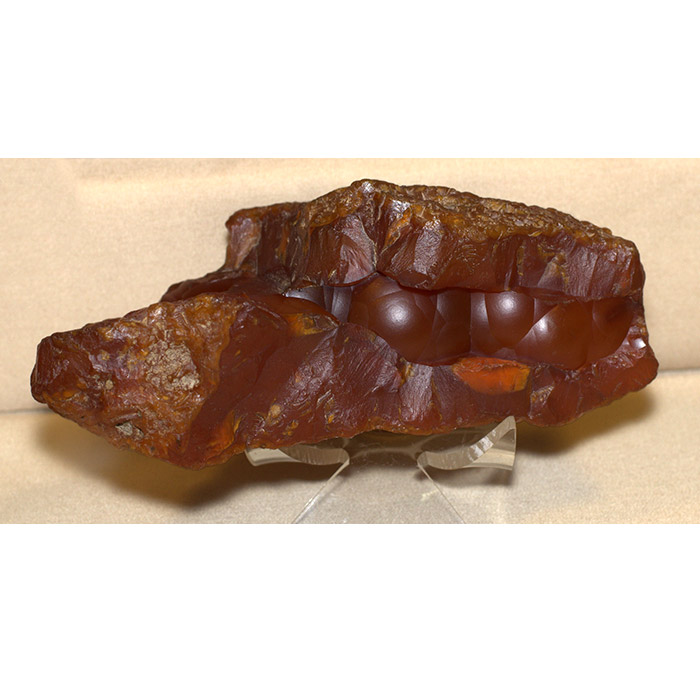 Carnelian is a variety of the mineral quartz or to be more exact, a reddish to orange brown chalcedony that's often banded.  Stones tend to be translucent and have the same chemical make up as agate which is also chalcedony.

The mineral agate is often heat treated or soaked in various solutions to enhance or change its colour.  This is done to produce what looks like natural carnelian.  When agate is heated impurities of iron oxide turn a deep shade of orange which mimics the colour of natural carnelian.

Carnelian with a deep reddish brown to almost black colour is known as sard.  The two names are often used interchangeably and apart from the difference in colour and carnelian being slightly softer, there are few other significant differences.

The name sardonyx is used to describe carnelian with bands of sard and white chalcedony.  Sardonyx and carnelian are the 'traditional' birthstones for the month of August whilst peridot is the 'modern' birthstone.

The name carenelian comes from the Latin word 'carnis' meaning flesh because of the stone's colour.  It's caused primarily by impurities of hematite.

Fine grade stones generally come from India but it can also be found in Brazil, Australia, Russia, Madagascar, South Africa, Uruguay and the U.S.A.

Carnelian was used in abundance in ancient Egyptian tombs because it was believed to assist the soul on its journey into the afterlife.  It was also believed to offer protection.

In the book of Exodus in the Old Testament red carnelian is believed (in one interpretation) to have been the first stone in the first row of the high priest breastplate.  This religious garment was worn by Aaron the first Jewish High Priest.

Carnelian is also revered in the Islamic faith.  The prophet Muhammad is said to have worn a ring featuring a carnelian gemstone which faced inwards towards his palm.  It's referred to as an "Abyssinian stone" (Abyssinia being modern day Ethiopia) which has led to considerable confusion over its exact identification.

Carnelian was once believed to calm jealousy envy and rage and was said to instill courage during battle.  Today when used for its metaphysical properties it's believed to aid analytical ability and precision.  It's recommended for those in dramatic and theatrical professions because it boosts confidence and courage.

Carnelian aids concentration and improves memory.  It can be used to remove negativity from other crystals and can help increase physical energy, personal power, creativity and compassion.

The carnelian mineral in the photo at the top of our article is courtesy of Steve (Singingstone48) (Flickr).  Click to see the original non-compressed image.

Our Collection of Carnelian