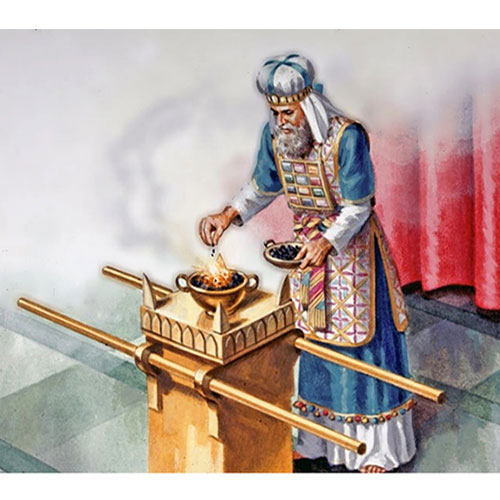 The high priest breastplate was a religious garment worn by the Jewish high priest during biblical times.  It was embedded with twelve precious gemstones each of which was inscribed with the name of one of the twelve tribes of Israel.

The high priest breastplate featured four rows of gemstones with three stones in each.  It was worn over the top of a tunic-like garment called an ephod.  Both are described in the Book of Exodus.

They're said to have been made from the same material and were woven out of gold, blue, purple and scarlet coloured threads along with fine linen that was "embroidered with skillful work."

The purpose of the breastplate was to carry the gemstones inscribed with the names of the twelve tribes of Israel.  This enabled them to be brought before God "as a continual memorial".  It's written Aaron the High Priest should "bear them upon his heart when going into the most holy place".

Problems with accurate translations from Hebrew and ancient Greek has made it very difficult to identify the gemstones and their exact layout.  The fact names of certain minerals have changed over the years plus many were grouped together under one blanket name, has further complicated matters.

As a result there have been extensive discussions over many years about the accuracy of the stones.  Nothing has ever been agreed conclusively.

The Roman Jewish historian Josephus and Saint Jerome who's known for translating the bible into Latin, connected the twelve gemstones to the twelve months of the year and twelve signs of the zodiac. Their proclamations which were made three hundred years apart were the first indication that gemstones could be used as birthstones.

Many centuries later each stone in the high priest breastplate was assigned to a month of the year and sign from the zodiac.  They were arranged according to the order in which they appeared in the book of Revelation.

The following six examples show the gemstones scholars believe are most likely to have been present and order in which they were positioned.

*Although some scholars believe one of the gemstones may have been diamond others believe it's unlikely.  The ancient words used to describe diamond indicate it was a particularly hard mineral that was either white or colourless.  It's not known for certain whether diamond was even known at this time.

The stones in the breastplate were inscribed with the name of one of the twelve tribes of Israel.  Therefore they had to be a reasonable size and with diamond being the hardest substance known to man, engraving it would have been incredibly difficult if not impossible.

Another factor worth considering is the Jewish people had not long been released from Egypt.  Therefore money was not available in abundance.  For this reason it's believed the gemstones in the high priest breastplate are likely to have been fairly inexpensive.