Chatoyance from the French for Cat's Eye 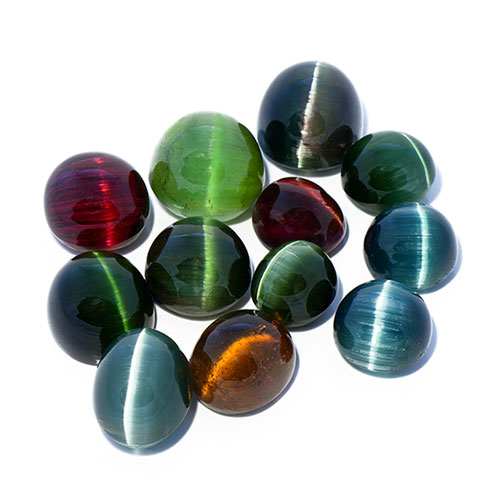 Chatoyance is an optical reflectance seen in certain rocks, minerals and gemstones.  A stone may also be described as being chatoyant or exhibiting chatoyancy.

This curious optical phenomenon is caused as light reflects off fibrous inclusions or cavities within the stone's structure.

To appreciate this optical phenomenon the stone must reflect light from different angles.  The effect can vary significantly and is best seen in gemstones that have been polished as a cabochon.

The minerals best known for being chatoyant are tigers eye and chrysoberyl also known as cats eye.  Chatoyance can also be seen in several other minerals.

The word originates from the French for 'cat's eye'.

The stones in our picture are elbaite which is a variety of tourmaline. Photo courtesy of Stan Celestian. The picture is clickable and redirects to the original non-compressed photo.