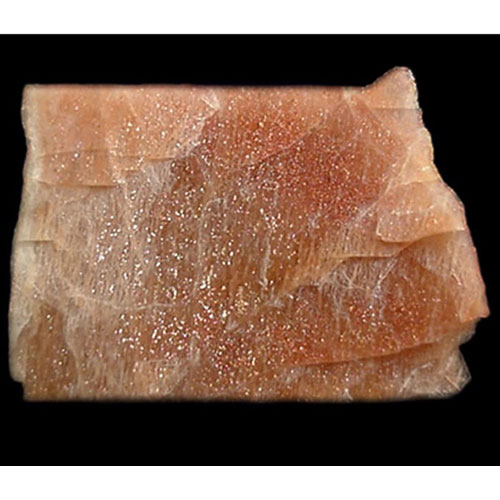 Aventurescence is an optical reflectance seen in certain gemstones.  Best known for being present in aventurine, it's best described as a metallic glitter caused by minute plate-like mineral inclusions.  When present in abundance they can influence the colour of the stone.

As light reflects off the inclusions a kind of spangled reflection can be seen.  This optical phenomenon is aventurescence.

As well as being present in aventurine it can also be seen in sunstone.

In sunstone aventurescence is caused as light reflects off minute inclusions of copper.  Sunstone is also known as aventurine feldspar.

The word aventurescence is widely reported to have come from the Italian 'a ventura' meaning 'by chance'.  The word is said to have come about following the chance discovery by Italian monks of aventurine glass also known as goldstone.

Depending on the article you read, the incident is said to have taken place in the 13th, 17th, 18th or 19th century.

We can find no factual evidence to support this story.

It's reported that Venetian glass making monks accidentally dropped a jar filled with specs of copper into a vat of molten glass. Once the mixture cooled and solidified it had a spangled or glittery appearance.  The material is said to have been named aventurine glass from the words 'a ventura' meaning 'by chance'.

From factual documentation we know aventurine glass is believed to have been created by Vincenzo Miotti.  This Italian physicist and astronomer was born in Murano in 1712.