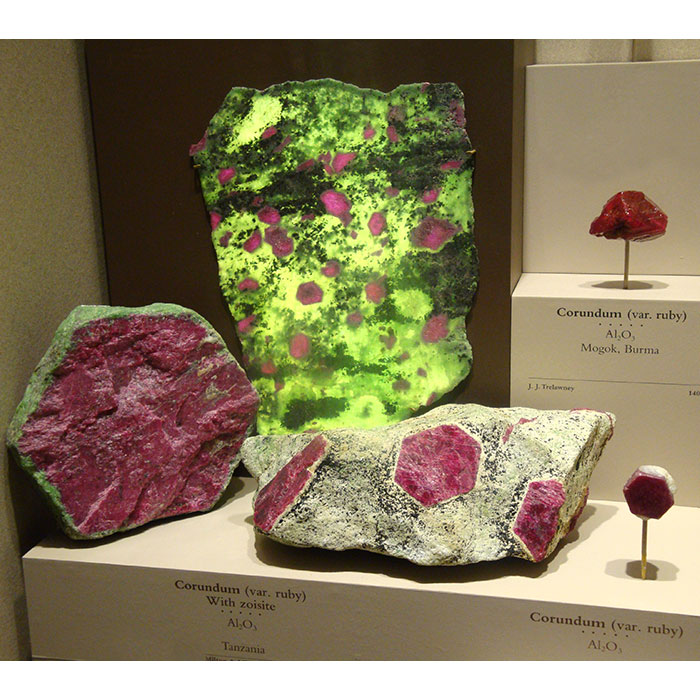 Ruby zoisite is a metamorphic rock that features distinctive red coloured crystals of the mineral corundum within green zoisite.  It's not unusual for black crystals of hornblende to also be present.  Due to this stone's striking colour it's widely used as a lapidary material but the difference in hardness of the two primary minerals means that it can be difficult to work with.  On Mohs scale of mineral hardness zoisite grades 6½ whilst corundum grades 9.  Red corundum is better known as ruby.

In crystal healing ruby zoisite is said to enhance psychic powers including the ability to enter a trance.  It can to help increase creativity and uniqueness without losing connection with humanity and provides amplification of the entire energy field of the body.

The vast majority of ruby zoisite comes from northern Tanzania and the name anyolite is also sometimes used which comes from the Maasai word anyoli meaning "green".  The Maasai themselves refer to the stone as ruby in zoisite as an expression of pride that such a precious mineral can be found on their land.  It also happens to be a more accurate description of what the material is. 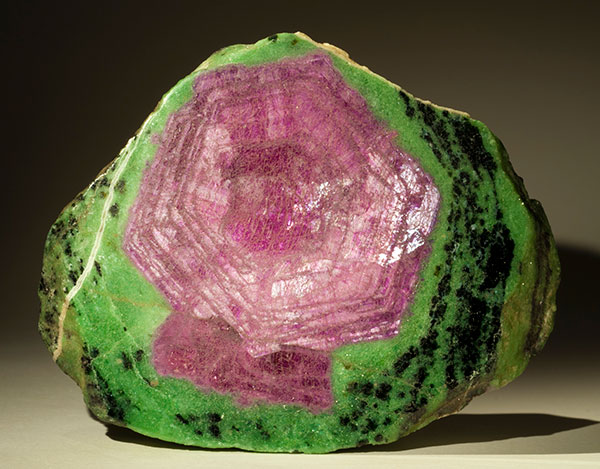 Ruby in zoisite is often confused with ruby in fuchsite which has a very similar appearance but is more common hence considerably cheaper.  The vast majority of this material comes from India.

The photo at the top of our page features ruby zoisite on display in the Smithsonian Museum of Natural History, Washington D.C. Photo taken by Stone Mania. The second which is courtesy of Stan Celestian features ruby zoisite from Tanzania. Both images are clickable and redirect to the original full size photo.

Our Collection of Ruby Zoisite