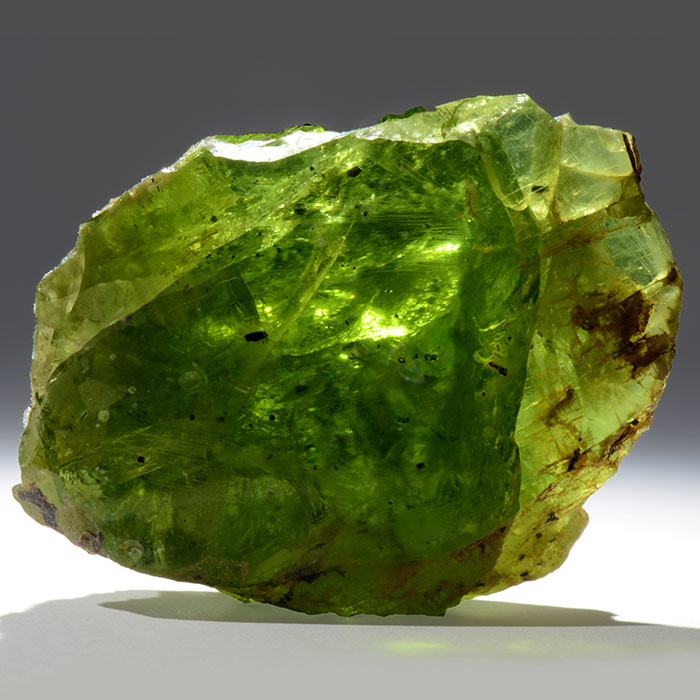 About the Gemstone Peridot

Peridot which is the gemstone variety of the mineral olivine is not only one of the most common minerals on Earth but has also been found in meteorites, on the moon and on Mars.  Olivine is one of the few minerals that occurs in just one colour.  The depth of colour and shade can vary from yellowish green to brownish green depending on the amount of iron that's present.  With that said, the finest grade stones contain more magnesium than iron.

The gemstone peridot which is the birthstone for the month of August is often pronounced per-i-dot but we believe the correct pronunciation is per-i-doh (suffix pronounced dough).

Despite the abundance of the mineral olivine, gem-grade peridot is much rarer.  The Smithsonian National Museum of Natural History in Washington D.C. houses some exceptional faceted peridot gemstones and the photograph below was taken by us during one of our many visits.  The photo at the top of the page is the mineral olivine.

Peridot Through the Ages

One of the earliest references to the stone peridot was by Pliny the Elder (Roman author and philosopher) in his encyclopaedia Naturalis Historia in which he tells of a stone that was presented to Berenice, Theban queen of Lower Egypt around 300 B.C.  It's also referenced in the bible's book of Exodus which states peridot was the second stone in the first row of the high priest breastplate.  This religious garment was worn by Aaron, brother of Moses and the first Jewish high priest.

In ancient texts peridot is believed to have been known as topazos which historically has caused some confusion with the mineral known today as topaz.  Originally mined on the island of Topazos known today as St John's Island or Zabargad in Arabic, most early stones were mined here and small amounts are still mined today.  Peridot from this island had excellent colour as well as sharp, lustrous and well defined crystal faces.  In later years large gem grade stones were also found in Myanmar formerly Burma and these mines became well known for their twenty and forty carat peridot stones which exhibited incredible colour and clarity.

Ancient Egyptian rulers called the gemstone peridot "the gem of the sun" because of its intense brightness.  They believed it could not be mined during daylight hours because the brightness rendered the stone invisible. In the dark it was believed to give off its own light so that its location could be marked and miners could then return by day to collect it. 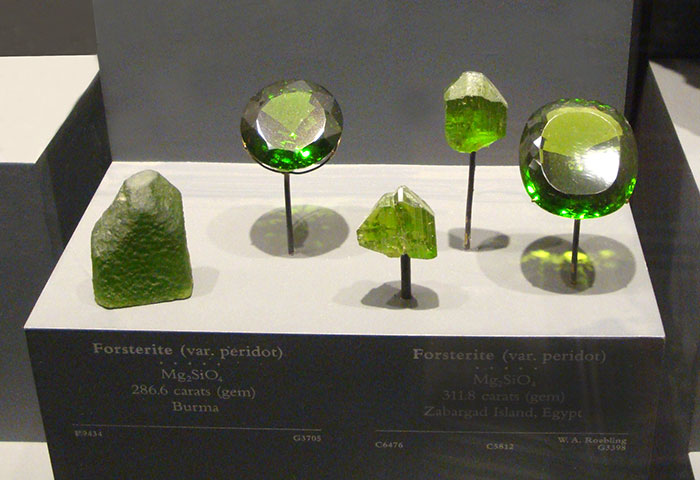 A particularly unusual characteristic about the mineral olivine is that it's highly susceptible to chemical weathering.  For this reason it cannot survive for long at the surface in wet climates. This is likely to be the reason why there are so few localities where it can be found and stones tend to be restricted to areas with arid or semi-arid climates.  A significant quantity of the finest grade peridot from the Suppatt region of Pakistan appeared on the market in 1992.  The deposit which is located 15,000 feet up in the Kashmir region of the Himalayan Mountains is inhospitable and rugged terrain prone to landslides and heavy winter snow.  Mining of peridot can only take place from late June to early September.

Some of the finest grade peridot from Pakistan ever to have been discovered was mined around the year 2000 and the size of these stones was described as being "quite magnificent".  Once cut some weighed over 2000 carats.

Peridot Mesa on the San Carlos Apache Indian reservation in the United States is currently the most productive peridot mining area in the world.  It's estimated that 80% to 95% of the world's supply of peridot stones come from here.  Smaller amounts can also be found in Australia, Brazil, China, Egypt, Norway and other parts of the USA.

The gemstone peridot grades 6½ to 7 on Mohs scale of mineral hardness which means it's fairly hard but is also brittle. Although often treated as one and the same, the hardness of a rock or mineral is not the same as toughness.  Hardness relates to a stone's resistance to being scratched whilst toughness is how easy it can be broken.

When used in crystal healing peridot is said to be beneficial for strengthening and regenerating the body.  It emits a warm energy and provides a shield of protection around the wearer.  Peridot helps to heal a bruised ego by lessening the feelings of anger or jealousy.  It increases patience, confidence and assertiveness as well as helping to slow down the ageing process on a mental level.  Peridot protects the aura and is a powerful cleanser of both the mind and body.

The stone can be used to release guilt, burdens or obsessions and will slolwly encourage you to detach yourself from outside influences.  It helps you to understand your destiny and to move forwards which makes it particularly useful for healers.

The mineral olivine in the photo at the top of our article is courtesy of Stan Celestian.  The second photo features peridot on display in the Smithsonian Museum of Natural History, Washington D.C.  Both photos are clickable and redirect to the original full size image.