Most Natural Topaz is Colourless

Topaz is a silicate mineral made up of aluminium and fluorine whose crystals form within igneous rocks.  Although it can be found in a variety of different colours the vast majority of natural topaz is colourless.  Much of this material is heat treated which brings about a change in colour.  The colour in red pink violet and purple topaz is caused by the presence of chromium but it can also be white, yellow, grey, blue, orange, brown or green.

Blue topaz is extremely rare so the vast majority is irradiated, heat treated or both.  By doing this it's possible to transform colourless topaz into a gemstone that's highly sought after around the world.  All gemstones that have been exposed to any level of radiation cannot be made available for sale until the level of radiation has reduced enough to make the stone safe to handle.  In most blue topaz that happens soon after the treatment has been completed.  Scientists believe that wearing a gemstone that has been irradiated poses no risk to health.

Depending on the type of treatment applied three different shades of blue can be produced and each has its own name.  Sky Blue is the lightest shade and the most well known variety of blue topaz whilst Swiss Blue and London Blue both have a deeper and richer colour.  Swiss and London Blue are more expensive than Sky Blue because of the type of treatment they've been exposed to.

Another reason for using heat to change or enhance the colour of topaz is because in many cases its natural colour can be bleached by sunlight which is particularly prevalent with the brown variety from Siberia and Utah.  Temperature and the method of heating will always be the deciding factor for the stone's colour but with that said, some stones are also coated with metallic oxides.

Although topaz is one of the hardest of all minerals it's actually quite fragile and can fracture or break quite easily along certain plains of the crystal.  Cleavage is the tendency for a crystalline solid to split or fracture along certain lines where there's a weakness between atoms in the crystal's structure.  Topaz grades 8 on Mohs scale of mineral hardness but Mohs scale is a tool which measures scratch resistance not toughness.

Historically all yellow coloured gemstones were believed to be topaz and it's only in the last two hundred years or so that it was discovered other minerals could also be yellow.  Yellow sapphire for many years was called oriental topaz and even today some varieties of quartz particularly citrine and smoky quartz are still occasionally referred to as topaz.  Topaz and quartz are two completely different minerals.

The name topaz is believed to have originated from a small island in the Red Sea just off the coast of Egypt once known as Topazios.  Today it's known as St. John's Island or Zabargad in Arabic.  Another theory is that it came from the Sanskrit word 'topas' meaning 'heat' or 'fire'.  There is some uncertainty as to whether topaz was even known to ancient civilizations or whether the name Topazos was actually a reference to olivine which is the mineral form of peridot.  Peridot is known to have been available in abundance on the island at that time whereas topaz was never found there.

The ancient Roman author, naturalist and philosopher Pliny the Elder wrote about finding "topazos" on St John's Island in his encyclopaedia Naturalis Historia. The name topaz can be traced back even further and is mentioned in the Old Testament in the Book of Exodus as being one of the twelve gemstones in the high priest breastplate.  In both references the stone is believed to have been peridot. 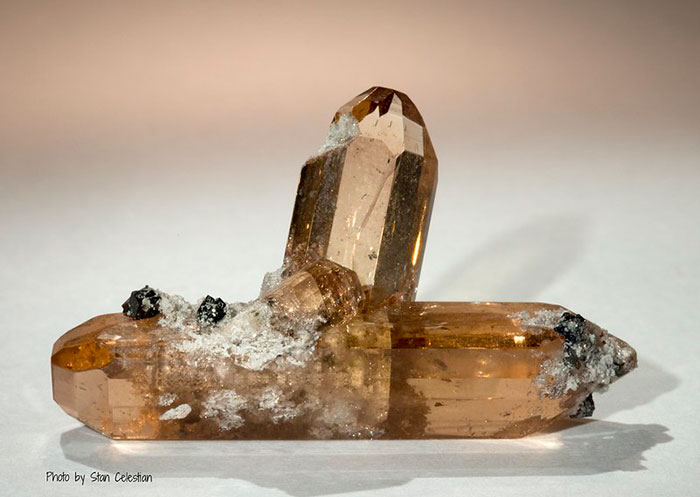 The mineral topaz can be found in several countries around the world world but the Minas Gerais area of Brazil has long been the world's largest supplier.

Topaz is one of the birthstones for the month of November with the other being citrine.  Blue topaz is the modern birthstone for December with the mineral turquoise being an alternative.

When used for its healing properties the mineral topaz can be used for cleansing the aura and inducing relaxation.  A wonderfully mellow stone it soothes the mind, heals the body and recharges energy that has been lost through stress, tension and fatigue.  A stone that promotes the truth it embraces forgiveness and helps rebuild broken friendships.

Topaz is a happy and positive crystal that drives away negative thoughts, instills confidence and promotes openness and honesty.  On a mental level it encourages wisdom, aids problem solving and has the capacity to see the bigger picture.  For those going through a significant change in their life topaz offers comfort and support and helps stabilise emotions that arise as a result of uncertainty.

Our Collection of Topaz