Tigers eye or tiger eye is a well known stone that' used primarily for decorative purposes.  Fine grade material can be exceptionally chatoyant especially when polished.  A rock or mineral that's chatoyant exhibits an optical phenomenon that's caused as light reflects off fibres below the surface of the stone.  When gently moved around the reflection of light causes colours and markings to look as though they're moving and changing.  The word chatoyant originates from French word for 'cat's eye'.

Tigers eye is believed to have been named because of its similarity to the colour of a tiger's eye.  The brown and yellow variety is the most popular stone and the variety most people are familiar with.  Tigers eye can however also be found in blue red and black.  Red and black tigers eye is almost always produced by heating the brown and yellow coloured stone but blue occurs naturally and is often referred to as Hawks Eye.

Heat treatments are widely used to enhance or change the colour of rocks and minerals and have been used in one form or another for thousands of years.  The Ancient Roman author, naturalist and philosopher Pliny the Elder wrote about the effects of heat on stones saying one gemstone could be changed into another and the colour of quartz could be changed to that of an emerald. In chapter 75 of his encyclopaedia Naturalis Historia pliny writes;

There is considerable difficulty in distinguishing genuine stones from false; the more so, as there has been discovered a method of transforming genuine stones of one kind into false stones of another.  Sardonyx, for example, is imitated by cementing together three other precious stones, in such a way that no skill can detect the fraud; a black stone being used for the purpose, a white stone, and one of a vermilion colour, each of them, in its own way, a stone of high repute. Nay, even more than this, there are books in existence, the authors of which I forbear to name, which give instructions how to stain crystal in such a way as to imitate smaragdus and other transparent stones, how to make sardonyx of sarda, and other gems in a similar manner. Indeed, there is no kind of fraud practised, by which larger profits are made.

Tigers eye is a relatively hard stone which grades 7 on Mohs scale of mineral hardness.  It's found in huge quantities in Western Australia in an area rich in iron.  South Africa also has extensive reserves and most of the finest tigers eye comes from Griqualand West.

In recent years concerns have been raised about the presence of asbestos in the mineral tigers eye.  All of the crocidolite which is asbestos that was once present in tigers eye was slowly replaced over millions of years with silicon dioxide otherwise known as quartz.

Having done extensive research on this subject I can say with some degree of certainty that tigers eye is completely safe to handle whether rough or polished.  Still not convinced?  This is what the experts say about blue tigers eye; https://www.mindat.org/mesg-539472.html

Tigers eye which is a variety of the mineral quartz began life as fibrous blue crocidolite (otherwise known asbestos) which is made up of iron and sodium.  Over millions of years as the quartz became embedded between the fibres of the crocidolite a transformation took place which resulted in either hawks eye (blue tigers eye) or the more traditional brown and yellow tigers eye.  During the transformation the asbestos dissolved completely and the quartz took on the fibrous formations which create the parallel lines within the stone. 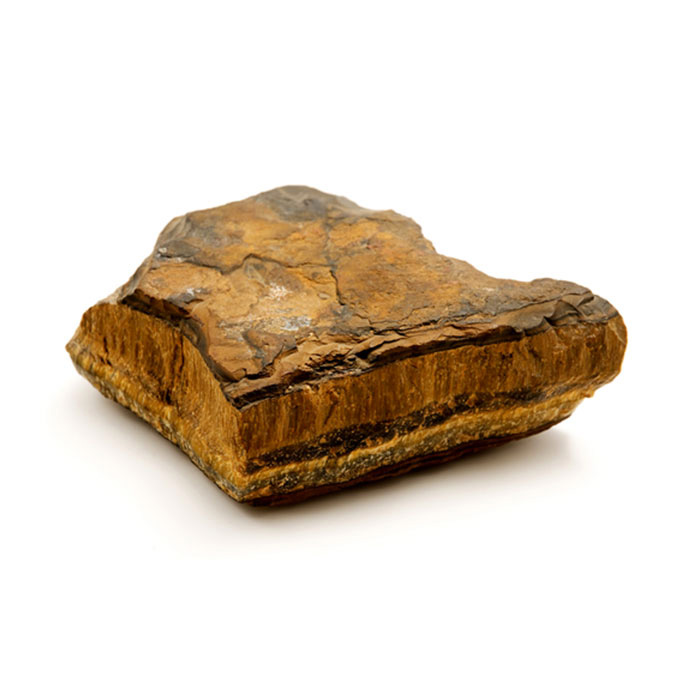 Like all gemstones which resemble an eye when cut or polished tigers eye has long been used for protection.  Roman soldiers wore or carried it because they believed it was an all seeing eye hence would keep them safe.  Today when used for its healing properties tigers eye enhances psychic ability, brings out integrity and helps you to achieve your goals.  It helps you to recognise the needs of others as well as your own and differentiates between what you want and what you actually need.

Tigers eye can be used to resolve dilemmas and internal conflicts and will help combat indecisiveness.  It helps release inner talents and ability and can support those who suffer with an addictive personality.  On a emotional level it balances yin and yang energies, revitalises the emotional body, fights depression and lifts low mood.

Tigers eye is a stone for business success due to its ability to bring clarity.  It symbolizes willpower, confidence and assurance.  Its calming energies will help relieve obstinate or stubborn behaviour and stones can also be used to gently reduce stress.

Our Collection of Tigers Eye