Tiger iron is a natural stone that can sometimes be mistaken for the mineral tigers eye.  Although some material can look quite similar, it's not the same stone.  With closer inspection it's usually quite easy to tell one from the other.

The mineral known as tiger iron is a banded iron formation (BIF) which occurs in rocks that date back 1.8 to 2.5 billion years.  These geological structures which can be found in several locations around the world are made up of relatively thin layers of minerals rich in iron.  Hematite or magnetite, red jasper and tigers eye are the most common.

Banded iron formations which can be hundreds of metres thick formed at a time when the earth was very young and there was no oxygen in the atmosphere.  Dissolved iron most likely from underwater volcanoes reacted with oxygen being expelled as a waste product by microscopic aquatic organisms called cyanobacteria.  The reaction led to precipitation which is a process whereby substances in a solution mix together and become an insoluble product.  The result was the formation of iron oxides on the seafloor which gradually became banded formations rich in iron and silica.  Iron oxides are a chemical compound of iron and oxygen, rust is a common example.

Over millions of years immense heat and pressure led to crystallisation and earth's natural movements caused the layers to become distorted.

As oxygen began to form in the atmosphere, an ozone layer developed which protected earth from the sun's deadly ultraviolet rays.  Organisms were then able to leave the water and start living on dry land.

The banded iron formation known as tiger iron can only be found in the Pilbara region of Western Australia.

In recent years the name mugglestone has started being used as an alternative to tiger iron.  The name only seems to be used within the metaphysical community.  Having carried out extensive research into the origins of the name, we can find no factual evidence to connect the name to the stone.  The only vague association is that ironstone was once widely mined in the Stoke on Trent and North Staffordshire areas of the UK.  Mucklestone is a small village in Staffordshire.

Ironstone is an iron-rich sedimentary rock valued for its iron ores. Ores are rocks and minerals from which metallic iron can be economically extracted.  Ironstone is a type of banded iron formation (BIF).  Ironstone is also a type of pottery that was first produced in the UK in the 19th century.  Similar to stoneware, it was used as a cheaper alternative to porcelain.  Despite the name it contains no iron and is not the same as the iron-rich sedimentary rock.  Iron was used in the name to reflect the material's strength and durability.

The ironstone (iron-rich sedimentary rock) that was mined in Staffordshire is not the same material as the mineral tiger iron.  Tiger iron can only be found in Western Australia. 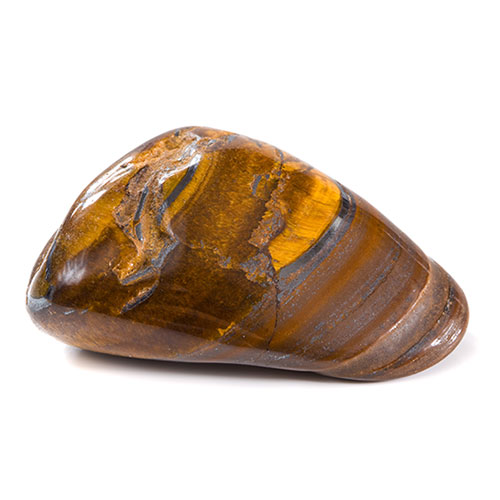 Some references we've seen state; "mugglestone was once found in a place called Moclestone in what is now Great Britain."  The only reference to Mucklestone being known as Moclestone is in the Domesday Book of 1086.

As we've found out after many years of writing articles, plagiarism leads to a huge amount of inaccurate and misleading information being published especially online.  Clearly someone has written an article associating tiger iron with Mucklestone in Staffordshire which seems to have led to the creation of the name mugglestone.  With the article having repeatedly been plagiarised, use of the name mugglestone has spread with many now stating it was named after the village of Mucklestone.

We can find no factual evidence to explain how or when the name came about.  Nor can we find any evidence to support any association between tiger iron and the United Kingdom.  We have seen some information that claims mugglestone is not tiger iron but more similar to tigers eye but the vast majority of tigers eye comes from South Africa and Australia.

The material being called mugglestone is tiger iron but how, why or when this name came about remains a mystery.  If you can share any factual information to help us get to the bottom of this, please do get in touch.

Tiger iron which takes on a high polish is made up of alternating layers of tigers eye which is a fibrous variety of quartz, red jasper and either the mineral hematite or magnetite.  All these materials are cryptocrystalline meaning their crystals are too small to be seen with the naked eye.  With tiger iron being made up of different minerals it should be classified as a rock not a mineral.

When used for its metaphysical healing properties tiger iron is said to promote inner strength and help balance emotional energies.  It can help to bring peace, calmness and tranquillity to your life.  Tiger iron enhances concentration, brings optimism and clears doubt and confusion.  It encourages appreciation of everything that's pure and beautiful and is especially suited to those who are artistic or creative.

The tiger iron in the photo at the top of this article is courtesy of James St. John. The photo is clickable and redirects to the original full size image. An entire album of tiger iron images can be found here.  The tiger iron tumbled stones are from our collection, this photo is also clickable.