Some History of Sugilite

The mineral sugilite which in the past has also been known as luvulite although the name is now rarely used, is a relatively new mineral first discovered in Japan in 1944.  In 1976 it was named after Professor Ken-ichi Sugi who was the eminent petrologist who found it.  The greenish yellowish brown stone that he discovered however was quite different in appearance to the purple coloured stone found many years later in South Africa.

The mineral found in Japan was at the time believed to be a variety of eudialyte so was not considered to be completely new.  It was another thirty two years before sugilite was finally classified as a mineral in its own right.

In 1973 a new source of sugilite came to light in an area known as the Kalahari Manganese Field in the Southern Kalahari Desert, South Africa.  As well as the size of the area dwarfing anything that had been found previously, the quality of the stone was also far superior.  The vast majority came from the Wessels Mine although much smaller quantities were also present in the adjacent N'Chwaning Mine.

Source of the Mineral Sugilite

Although the mineral sugilite occurs both as crystals and in massive form, crystals are very rare and have only been found in a small number of locations worldwide.  The vast majority of the world's sugilite and certainly almost all of the finest grade material comes from the Kalahari Manganese Field.  This area located in the Northern Cape of South Africa is the largest known manganese deposit on earth.  It lies amongst sedimentary rocks known to be more than two billion years old.

Over the last few years smaller deposits of gem grade sugilite have been found in Italy, New South Wales, Mount Saint-Hilaire Canada and Tajikistan.  It has also reportedly been found in India but because of the limited amount present and low grade, the find has not been pursued. 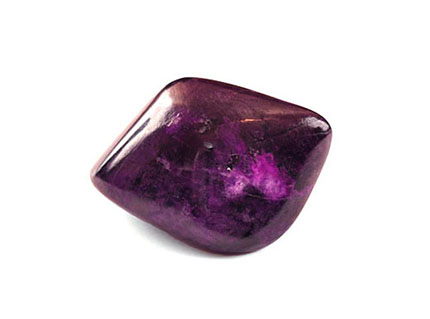 When used for its healing properties sugilite strengthens the heart, aids physical healing and reduces stress.  It balances the mind, body and spirit and encourages peace of mind and a general feeling of well-being and spiritual love.  Due to the present of manganese it's said to be a good remedy for a headache.

Sugilite counteracts the feeling of alienation or isolation and reduces tension about what you want and what can realistically be achieved.  A major love stone it brings wisdom and opens all of the chakras to the acceptance of love and a path of happiness. It helps find answers to questions about life such as why am I here?  What is my destiny?

Having such a close relationship with love makes sugilite perfect for protecting the soul against shock and trauma.  It can often bring light into the very darkest situations.  Sugilite promotes understanding on a mental level whilst emotionally helps with the ability to face difficult situations.  It eases sorrow, grief and fear and encourages positive thoughts and behaviour.  A stone for those who need love and support, sugilite is an essential companion for those who find certain aspects of everyday life a struggle.

The name sugilite is often pronounced with a soft 'g' as in the word 'genius' but should in fact be said with a hard 'g' as in 'gold'.  The reason for this is because the surname of the person after whom it was named is pronounced in this way.

On Mohs scale of mineral hardness sugilite grades 7 which puts it on par with quartz.  The finest grade material when in massive form is known as gel sugilite but due to its rarity the smallest piece can command eye-watering prices.

As a company who does a considerable amount of business in South Africa and who deals with several suppliers across the country, we have in recent years found it extremely difficult to source any fine grade sugilite.  The material we have been able to find certainly isn't cheap.  Sugilite is a rare stone that's highly sought after by rock and mineral collectors around the world. 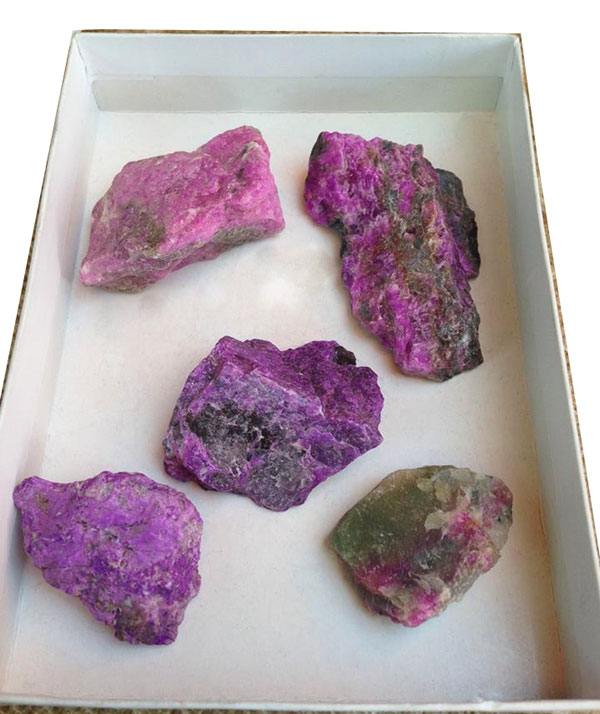 All of the sugilite photos in our article were taken by Stone Mania ©.  The museum piece is on display in the Harvard Museum of Natural History, Massachusetts, USA.  Both the polished sugilite stone and rough pieces were once part of our collection. The first and last photo are clickable and redirect to the original full sized image.

An interesting article about Sugilite