What Exactly is Tourmaline?

Tourmaline is not one mineral but a large group of more than thirty different minerals all of which share a common crystal structure and many physical properties but their chemical composition varies considerably.  In fact tourmaline is considered to be one of the most complicated groups of silicate minerals.

Vertical striations are characteristic of the mineral tourmaline and it's very common for crystals to have fractures and inclusions.  Striations which are present on several minerals including quartz, pyrite and apophyllite are narrow grooves or ridges that appear as parallel lines.  On transparent crystals they can sometimes be mistaken for scratches.  Where present they often help with the identification of certain minerals.

The most common variety of tourmaline is schorl which is black and always opaque.  Crystals vary in size from very small to very large and when fine needle-like crystals grow within the mineral quartz the stone is known as tourmalinated quartz.

Dravite is best known as brown tourmaline although the exact shade of colour can vary.  Elbaite is another well known variety of tourmaline that's prized for the quality of its crystals, their depth of colour and the variety of colours in which they occur.  It often exhibits pleochroism which is an optical phenomenon in which different colours can be seen when the crystal is viewed from different angles.  Despite the many colours in which elbaite can be found the colour of the streak which is the mineral in powdered form is white.

Rubellite is a gemmy variety of tourmaline that occurs in various shades of red.  The name originates from the Latin word 'rubellus' meaning 'reddish'.  Both rubellite and watermelon tourmaline which exhibits a red centre and green perimeter are varieties of elbaite. 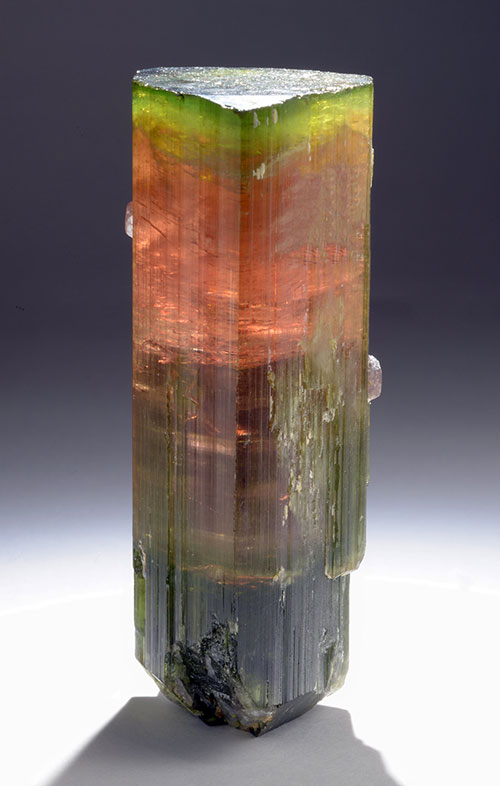 An electrical charge can be produced in some tourmaline crystals which has led to it being used in industry.  Crystals are mainly used in pressure measuring equipment and other scientific applications.  Tourmaline was used in the production of pressure sensitive gauges for submarine instrumentation and other war-time equipment.  The pressure gauges that measured the power of the first atomic bomb blasts were made with slices of tourmaline.

Flawless crystals are also used in certain electronics but finding flawless tourmaline crystals is not easy.

Tourmaline can be found in many countries around the world but some of the finest material comes from Africa, the Ural Mountains of Russia, Pakistan, Afghanistan, Sri Lanka and the USA.  The world's largest tourmaline mines are in the Minas Gerais state of Brazil.

The mineral tourmaline grades 7 to 7½ on Mohs scale of mineral hardness so it's quite a hard stone which makes it relatively easy to work with.  It's worth mentioning however that Mohs scale measures the scratch resistance of one mineral against another and is not a reflection of toughness.  Like many crystals tourmaline is brittle so will break or fracture very easily.

Along with opal tourmaline is the birthstone for the month of October.

When used for its healing properties tourmaline cleanses and purifies energy, grounds spiritual energy and clears and balances all of the chakras.  Wands can be used to clear the aura, remove blockages and disperse negative energy.

Tourmaline is a stone that helps bring deep mental understanding of ourselves and situations.  It can find solutions to complicated problems and is a powerful mental healer.  It can ease paranoia, diminish fear and removes the feeling of being the victim.  Tourmaline is a stone of compassion that increases tolerance and brings good luck and prosperity.

Our Collection of Tourmaline