Sunstone also known as aventurine feldspar is a variety of the mineral feldspar which exhibits a spangly appearance correctly known as aventurescence.  This optical phenomenon is caused by the presence of tiny plate-like inclusions of the minerals goethite or hematite but copper can also very occasionally be present.  The more heavily included the stone the more desirable it is.  The inclusions are the cause of the aventurescence.

Heliolite which comes from the Greek word 'helios' meaning 'sun' and 'lithos' meaning 'stone' was once used as an alternative name for sunstone but is now very rarely used.

Sunstone is one of the few gemstones that's never enhanced.  On Mohs scale of mineral hardness it grades 6 to 6.5 which means it's relatively hard.  Hardness however should not be confused for toughness which relates to a rock or mineral's resistance to cracking, breaking or chipping.  The characteristic known as hardness relates to how easy a stone can be scratched by another rock or mineral. 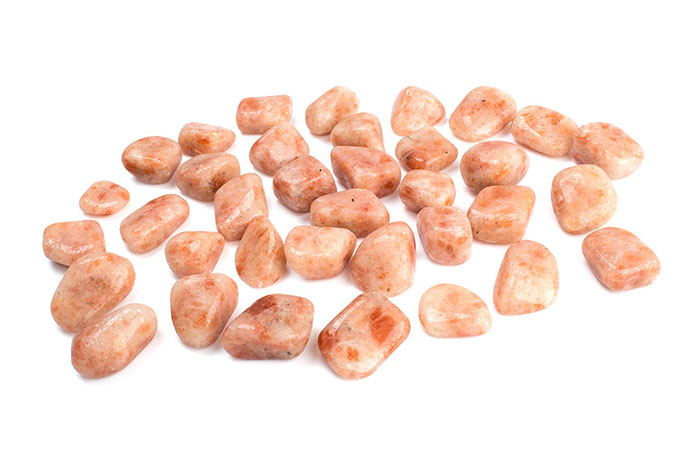 Goldstone is a man-made material also known as aventurine glass and is often used to imitate the mineral sunstone.  In goldstone tiny specs of copper reflect light from within the stone which give a similar appearance to the aventurescence seen in sunstone.

In Ancient Greece sunstone was thought to represent the sun God hence bringing life and abundance to those fortunate enough to wear or carry it.  It was also used for ornamental purposes in goblets and plates as it was believed to counteract the effects of poison and produce strength.  In ancient India sunstone was believed to offer protection from the destructive forces of other realms.

Today when used for its healing properties sunstone is said to be a stone of protection which increases the power of ones personal attraction. It can be used to clear and energize the chakras, to dissipate fear and alleviate stress.  A stone of light and happiness sunstone heightens intuition and reminds you of the importance of taking care of yourself.

Sunstone generates light and brings energy to dark situations.  It's a good stone to use if you're looking to cut ties with someone who's negative and despondent.  For those who find it difficult to say "no" it can give you the confidence to remove yourself in a positive way from a situation without having to make a sacrifice you don't want to make.

Sunstone gently reverses feelings of failure and increases self-worth and confidence. A stone of optimism it works hard to find something positive in almost every situation.  An ideal stone for helping to combat SAD (seasonal affective disorder) it lifts depression and instills hope.

Our Collection of Sunstone