Petrified wood is a type of fossil in which the organic material has been replaced by natural minerals but the original cell structure has remained largely intact. The process which is known as petrifaction takes place when fallen trees and plants become buried under volcanic ash or sediment and are preserved due to lack of oxygen.

As groundwater rich in minerals such as quartz, calcite, pyrite and occasionally opal flows over the organic matter it fills any pores and cavities. When the water dries up the minerals crystallise which creates an internal cast.  Although most of the original organic matter decomposes the cell walls often remain in tact and surround the newly formed crystals.

Colours in petrified wood are caused by the different minerals.  Red or pink is from hematite, shades of yellow, orange and brown come from goethite.  Green comes from pure reduced iron also known as native iron, white comes from quartz.  Black is carbon or pyrite and blue and purple come from manganese dioxide.

The entire process of petrifaction is extremely slow and is believed to take 10,000 years at the very minimum from start to finish.  There is some research to suggest that under the right conditions it may take place over a much shorter period of time.  What is known for sure however is that the slower the process the more precise the replication.  In some cases the petrified wood stone can be an almost exact replica of the original organic matter right down to microscopic levels.  It's not unknown for ring patterns, bark and wood grain of the original tree to be clearly seen and in some cases it can be so precise the specific variety of tree can be identified.

The word petrifaction comes from ancient Greek and literally means 'wood turned into stone'.  The word fossil comes from Latin fossus meaning 'dug up' or 'buried'.  In English we use the term petrified to describe a situation where someone is paralysed by fear which causes them to freeze.  Petrified means to convert or change something into stone and comes from the Latin word 'petra' meaning rock or stone.  The origins of the suffix 'fied' is believed to come from the Latin 'facere' meaning to 'make'.

The words fossilised wood and petrified wood are often used interchangeably and deciphering the difference between the two materials is not easy.  A thread from 2012 that I discovered in The Fossil Forum makes interesting reading and addresses the matter well.

Petrifaction is a form of fossilisation but for the purpose of simplicity, the word fossilisation tends to be used instead.  In the forum thread one thing that's emphasised is that not all fossils are reinforced or replaced with minerals.  Those which are do seem to be classified as fossilised as opposed to petrified.

The definition of 'fossil' according to the Oxford dictionary is "the remains or impression of a prehistoric plant or animal embedded in rock and preserved in petrified form".  It defines 'petrifaction' as "the process by which organic matter exposed to minerals over a long period is transformed into a stony substance".  Although any organism can be petrified, wood, bone and shell are the most common. 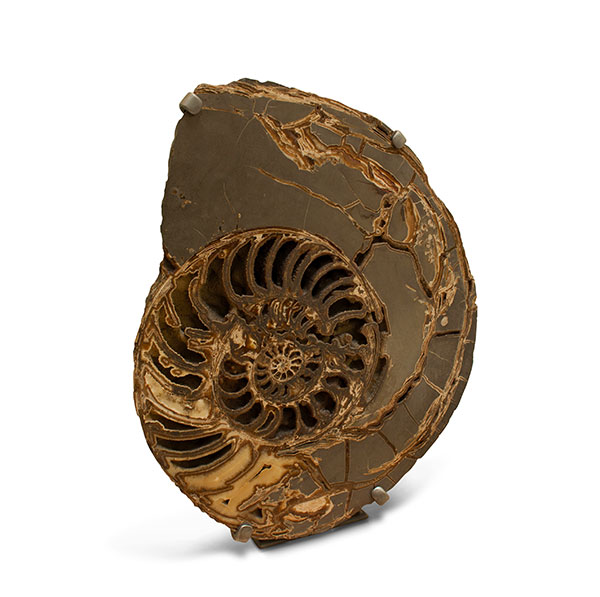 Peanut wood is a distinctive and unusual type of petrified wood that's not particularly well known.  Around one hundred and twenty million years old, most of the world's current supply started life as conifer trees in Western Australia.  As the trees died they were carried away by water and ended up in the sea as driftwood where they were subsequently attacked by the teredo navalis. Also known as the naval shipworm, this species of saltwater clam has an appetite for boring through wood and has been an extremely destructive pest for as long as there has been wood in the sea.  Once full of boreholes the driftwood sank to the ocean floor and the process of petrifaction began. 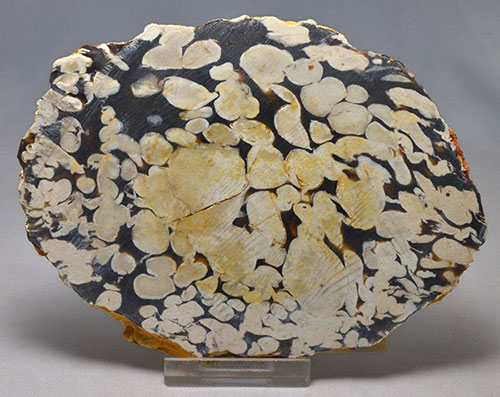 The petrified wood at the top of this article and the petrified ammonite are both on display in London's Natural History Museum.  Photos were taken by Stone Mania.  The second photo is courtesy of Stan Celestian.  Clicking this image redirects to some impressive photos of petrified wood taken by this talented photographer.  The petrified wood slices in the third photo are from our collection.  With the exception of the peanut wood, all photos in this article are clickable and redirect to the original full size uncompressed image.