Opals are either classed as precious opal or common opal. The precious variety boasts an iridescence known as 'play of colour' and these stones have been highly prized since Roman times.  Common opal which from a geological perspective is almost identical lacks play of colour, is usually opaque and can be found in many different colours.

The play of colour seen in precious opal is caused by the reflection and scattering of light from minute uniformly sized and closely packed silica spheres.  These formed when groundwater rich in minerals seeped into deep cracks and voids within Earth's crust and subsequently dried up.

Around ninety five per cent of the world's opals come from the outback deserts of Australia and the remaining five per cent are mined in Mexico, Brazil, the U.S states of Idaho and Nevada.  More recently the stone has also been found in Ethiopia and Mali.

Although opals were first discovered by Australian gold prospectors in 1863, the stone is believed to have been mined much earlier by the Aztecs in South and Central America.  There are reports which state that opals from Ethiopia were being used as tools as early as 4000 BC although factual evidence to support this is fairly vague.

Legends and myths have been associated with rocks and minerals for thousands of years and possibly much longer.  A story once told by Australian aborigines claim God came down to earth on a rainbow to bring the message of peace to all mankind and at the spot where his foot touched the ground, opals came alive and sparkled with all the colours of the rainbow.

The origins of the name opal possibly came from the Sanskrit word "upala" meaning "valuable stone" which in turn may have come from the Greek term 'opallios' which loosely means 'a gem with a kind of play of colour'.  The Ancient Greeks believed opals could give the wearer the power of foresight whilst the Romans revered them as a symbol of hope and purity and believed they could offer protection from disease.  Eastern cultures regarded the stone as being a symbol of truth and ancient Arabs believed it came from heaven and acquired its play of colour from flashes of lightning.

During the Middle Ages opals were thought to be beneficial for eyesight and some even believed they could render the wearer invisible.  For this reason stones were often carried by thieves.  The French Emperor Napoleon gave his wife Josephine a magnificent opal called 'The Burning of Troy' named because of the variation of colour.

Today opal is considered to be a stone for those who are looking for true love.  It enhances positive characteristics for those born under the zodiac sign of cancer and is the modern and ayurvedic birthstone for the month of October.  A delicate stone which enhances psychic and mystical visions, opal stimulates originality and boosts creativity.  Opal is a stone of reflection that picks up on positive feelings and memories and amplifies them.

Associated with love, passion and desire opal can stabilise emotions and gives the confidence to explore intimate feelings. It encourages a positive attitude and brings loyalty, respect and understanding. 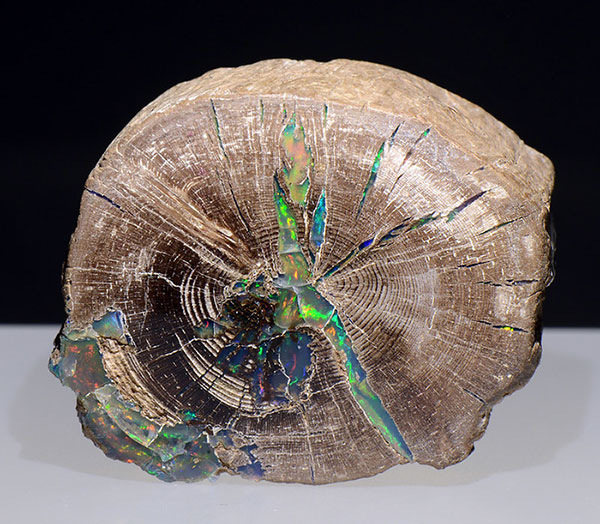 A superstition brought about by the novel Ann of Geierstein written in 1829 by Walter Scott damaged opals popularity because it was described as being an unlucky stone.  Its reputation was gradually restored by public figures such as Queen Victoria, French actress Sarah Bernhardt and many others since.

Common opal which is not as well known or as popular as precious opal can be found in many different colours but the most highly sought after are pink and green.  The stone is almost always opaque and is called "common" opal it can be found in many countries around the world. Like the precious variety it's always shaped as a cabochon.

Precious opals are fragile and need to be looked after carefully.  On Mohs scale of mineral hardness they grade 5½ to 6½ which means they can be scratched by any stone with the same number or a higher number on the scale.

The opal in the photo at the top of this page which is from Andamooka in Southern Australia is on display in the Natural History Museum Los Angeles.  The second photo of opal in petrified wood is housed in the same location.  Both photos are clickable and redirect to the original full size image.  Photos courtesy of Stan Celestian. The three links in the first section of our article redirect to stunning photos of opal stones.

Our Collection of Common Opal