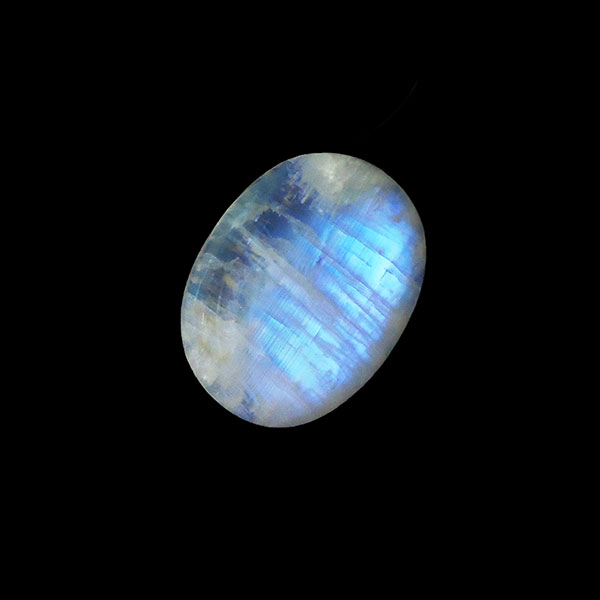 Moonstone which is made up of the feldspar minerals orthoclase and albite can be found in different colours.  Stones exhibit an opalescent lustre and is used exclusively for decorative purposes.

White moonstone is often referred to as rainbow moonstone.  A distinctive blue flash can be seen as it reflects light from different angles.

Moonstone can be translucent to almost transparent.  In the finest grade material the opalescent lustre can be quite impressive.  It's caused by the scattering or diffraction of light.

The blue sheen or iridescence is correctly known as schiller.  This comes from the German word for 'twinkle'.  The word adularescence is also used which comes from adularia.  Adularia is a variety of the rock forming mineral orthoclase.  The most common type of moonstone is adularia.

Labradorescence is a term used when the same optical phenomenon is seen in the mineral labradorite.

To enhance schiller or adularescence gemstones are shaped and polished as cabochons.

In coloured varieties of moonstone a milky white glow can be seen which originates from beneath the surface of the stone.  Moonstone was once described as having the appearance of lunar light floating on water.  It's believed this is how the name 'moon stone' came about.

Although a milky white sheen is most commonly observed, hues of orange or blue can also sometimes be seen.  With moonstone being translucent, when coloured material is held up towards the light much of the colour appears to drain away.  With darker stones, objects placed between the stone and the light can create an eerie shadow.

Moonstone has a long history and is known to have been used for thousands of years.  In the religious garment known as the high priest breastplate scholars believe white moonstone was the third stone in the second row.

The Romans used moonstone in jewellery and believed it was moonlight in a magical solid form.  In Europe during the Middle Ages it was believed if you gazed at moonstone for long enough you would fall into a deep sleep that would predict the future.

In India it has long been considered to be a sacred stone and continues to be widely used amongst the general population.  During the early part of the 20th century it was used in Art Nouveau jewellery.

Some of the world's finest moonstone comes from Myanmar (formerly Burma) and Sri Lanka.  Deposits can also be found in Brazil, India, Madagascar, Mexico, Tanzania and the USA.

When used for its metaphysical properties moonstone is used to protect those who travel.  It's also popular as a talisman to bring luck.

Moonstone stimulates confidence and composure and is a reminder that everything is part of a cycle of change.  It's a crystal for lucid dreaming which can enhance metaphysical abilities and the power of clairvoyance.  It's also associated with calmness, hope, happiness, tranquility and new beginnings.

Birthstone for the Month of June

Moonstone is the birthstone for the month of June.  Pearl, alexandrite and emerald can be used as alternatives.

On Mohs scale of mineral hardness it grades 6 to 6.5.

It should be handled carefully because it has a tendency to break along planes of weakness within its crystal structure.  The term cleavage is used to describe how prone a mineral is to breaking in this way.

Our Collection of Moonstone