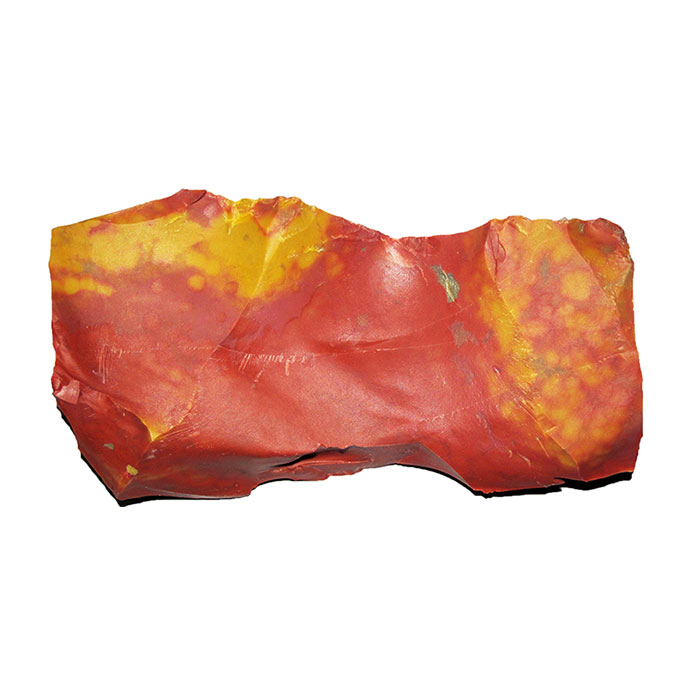 Mookaite is a colourful variety of jasper found only in Western Australia.  Used as a decorative material and for its metaphysical properties, most stones take on a high polish.

Mookaite is made up predominantly of the microscopic remains of minute aquatic organisms called radiolaria.  The stone's scientific name is windalia radiolarite.

The radiolaria measured 0.1 to 0.2 millimetres and produced intricate mineral skeletons.  As ancient oceans receded they gradually died out and their skeletal remains slowly transformed into sedimentary rock.

Although many varieties of radiolarite can be found around the world, windalia can only be found in one location in Australia.

The name mookaite originates from the area where this variety of jasper is found.  The name has never been officially registered.  According to locals it comes from the aboriginal word 'mooka' meaning 'running water'.

The mookaite deposit is located on private land in Mooka Creek on Mooka Station.  This area is located on the west side of the remote Kennedy Range National Park.  Mookaite has not been found anywhere else in the world.

Although often pronounced 'mookite', the correct pronunciation is 'mooka~ite'.  This is because it was named after 'Mooka' Creek.  Rocks and minerals that have been named after people or locations are often given the suffix 'ite'.

The mineral sugilite was named after Professor Kenichi Sugi.  Haematite comes from 'haema' the Greek word for blood.  Sodalite was named because of its high sodium content and labradorite is named after the coast of Labrador in Canada.

My personal favourite is Englishite which just like mooka~ite should be pronounced English~ite but rarely is.

Many articles online refer to mookaite by different names all of which strangely, are very similar.  These include mookalite, mook, mookerite and mook jasper. 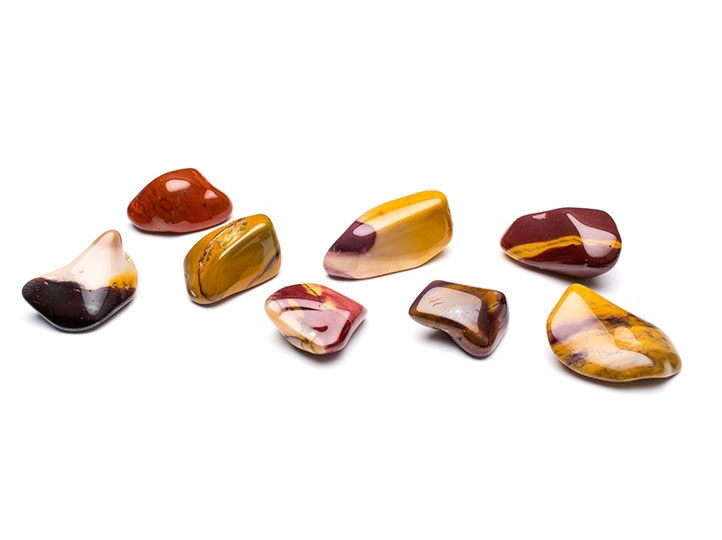 Although frequently referred to as a mineral mookaite is in fact a rock.  This is because like most varieties of jasper, it's made up of several different minerals and substances.

Colours are caused primarily by the presence of iron and manganese.  Along with precious opal mookaite is one of Australia's best known gemstones.

On Mohs scale of mineral hardness mookaite grades 6 to 7.  Although a relatively hard stone it's also brittle so will break or fracture quite easily.

The hardness of rocks and minerals is often confused for toughness but these two characteristics are not the same.  Hardness relates a stone's resistance to scratching.  Toughness (correctly known as tenacity) is the way it reacts to stress meaning how easily it breaks, cracks or bends.

The mookaite in the photo at the top of our page is courtesy of James St John. The tumbled stones are from our collection. Both photos are clickable. The first redirects to a collection of non-compressed mookaite images.

Our Collection of Mookaite