Hemimorphite which is a zinc silicate and smithsonite which is a zinc carbonate were once believed to be the same mineral because of the similarity in their external appearance.  For this reason until the early 1800's both minerals were known as calamine but the British chemist and mineralogist James Smithson then discovered that from a chemical and crystallography perspective, they were both quite distinct hence were actually two different minerals.

The zinc carbonate was later renamed smithsonite after James Smithson and hemimorphite came from the Greek words 'hēmi' meaning 'half' and 'morphē' meaning 'form' which in reference to the stone's hemimorphism.  A mineral that's hemimorphic has a different crystal habit at opposite ends of the same crystal.

The Roman author, naturalist and natural philosopher Pliny the Elder wrote about the mineral hemimorphite and referred to it as 'galmei'.  Other ancient writers referred to it as cadmia which is an oxide of zinc.  The name calamine came from the corrupted Greek word cadmia.  German geologist and mineralogist Gustav Kenngott (1818-1897) renamed it albeit unofficially, hemimorphite before American clergyman and mineral dealer Ebenezer Seymour described it in 1868 following studies of samples from Romania.  The obsolete name calamine remained in use until the 1930's. 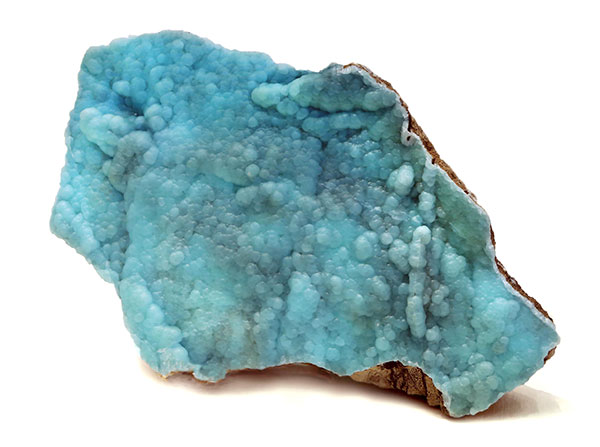 Its moderate hardness and maze of hairline fractures along with the fact that hemimorphite is very brittle makes faceting the stone extremely difficult.  For this reason when used as a gemstone hemimorphite is almost always shaped as a cabochon.

Blue hemimorphite can resemble the mineral turquoise or could even be mistaken for the mineral larimar.  Astonishingly hemimorphite that resembles this rare mineral from the Dominican Republic is now being marketed as "Chinese larimar".  Recently we've heard of people buying what they believe to be larimar only to then receive hemimorphite.

Although in its purest form hemimorphite is white or colourless it can also be found in blue, green and grey.  The variation in colour is due to trace elements of copper and iron.

The mineral hemimorphite can be found in several locations worldwide including on the Belgian-German border, Poland, USA, North Africa, Thailand, Sardinia, Siberia, Austria, Namibia, Spain, Australia and England.  Some of the world's finest material which includes colourless and transparent gemmy crystals come from Mexico.