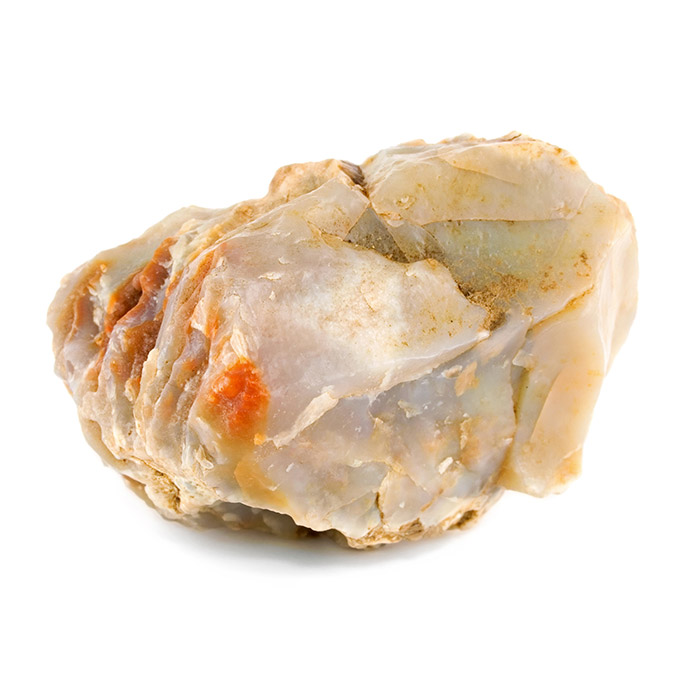 The mineral chalcedony tends to have a waxy lustre, is usually translucent and can be found in white, grey, blue or brown.  Stones can exhibit many other colours due to the presence of different minerals but inclusions tend to be microscopic.  Blue chalcedony is particularly popular as a lapidary material but stones are frequently dyed.

Graded 6.5 to 7 on Mohs scale of mineral hardness, chalcedony is a relatively hard stone which can be found pretty much worldwide.  The finest grade material comes mostly from India, Madagascar, Burma, Brazil, Mexico and the USA.

Some of the lesser known varieties of chalcedony include plasma, sard and sardonyx.  Sard occurs in shades of light to dark brown and sardonyx features bands of sard in addition to white chalcedony.  Stones that feature distinctive and colourful bands are mostly referred to as agate.

When the bands are black, white, dark brown or just one colour, the stone becomes known as onyx.  The main difference between agate and onyx is the bands.  In onyx they're parallel whilst in agate they're curved.

The mineral chalcedony has been used by man for thousands of years.  It's believed to have been one of the earliest materials used for tools and weapons.  Other varieties including agate, flint, jasper and petrified wood were also widely used.

Considered to be a sacred stone by the Native American Indians, chalcedony was used to promote stability within the tribe. In ancient times it was used to make goblets lined with silver.  These were believed to offer protection against poisoning.

When used for its metaphysical properties chalcedony encourages generosity, protects against nightmares, fear of the dark, hysteria, depression and combats negative thoughts.

Our Collection of Chalcedony