The mineral calcite is well known for its spectacular and varied crystal formations of which there are more than 300 different types.  It has more crystal structures than any other mineral and can also be massive.  In this formation crystals are tightly intergrown and form one large mass. Individual crystals are not visible and have no external shape or structure.

Calcite crystals can vary dramatically in size and shape and can be found in almost any colour.  In its purest form calcite is either colourless, very pale or white.

Crystals can demonstrate double refraction of light correctly known as birefringence.  This means when light passes through the crystal it splits in two creating a double image of anything that's being viewed.  Double refraction is widely used in optical applications.  The type of calcite that exhibits this property is known as optical calcite or Iceland Spar.

During the process of double refraction polarised light travels through the crystal at different speeds and in different directions.  As a result one of the rays is bent at an angle or 'refracted' whilst the other remains unchanged.  A good example is a pencil standing in a glass of water.  At the point where the pencil is no longer submerged, it looks to be misaligned.  This optical illusion is caused by refraction of light.  The light bends at the very point where the pencil enters the water but then continues in a straight line.

One of the most common minerals on Earth, calcite forms many rock types including limestone, marble and travertine.  It can also be found in caves as stalagmites and stalactites and is the main component in the shells of sea creatures.  As they die and fall to the seabed, more rocks rich in calcium are created but the process takes place over millions of years.

Calcite is so widespread that it can be found in almost every country in the world. 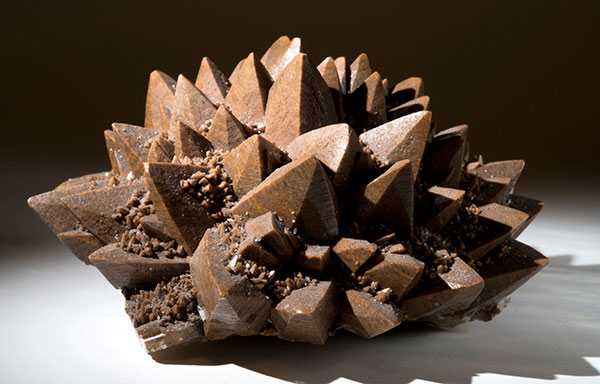 The properties of calcite make it one of the most widely used of all minerals.  Large blocks of limestone and marble have been used in construction for thousands of years.  Although today they're seen as a more exclusive material, both are still widely used in the production of cement and concrete.

Mined extensively in ancient Egypt, white and yellow calcite was used in everything from buildings to vases to the eyes in statues.  The Sphinx of Memphis which is believed to have been carved between 1700 and 1400 BC is the largest calcite statue to ever have been discovered.  The Great Pyramid of Egypt was once covered with a casing of limestone.  It's estimated that 5.5 million tons would have been used to create it.

When used for its metaphysical properties calcite is beneficial for those studying subjects relating to arts and science.  It encourages motivation, revitalisation and can be used to improve focus and concentration.  Calcite amplifies energy and balances and cleanses the chakras.

A very soft mineral calcite grades just 3 on Mohs scale of mineral hardness.  Pink yellow orange and blue are widely used for lapidary purposes.  When used as a gemstone it tends to be shaped as a cabochon.

Our calcite photos are courtesy of Stan Celestian (Flickr).  The twin crystal at the top of the page is from Brazil, the dog-tooth spar from Mexico.  Images are clickable and redirect to the original non-compressed photos.