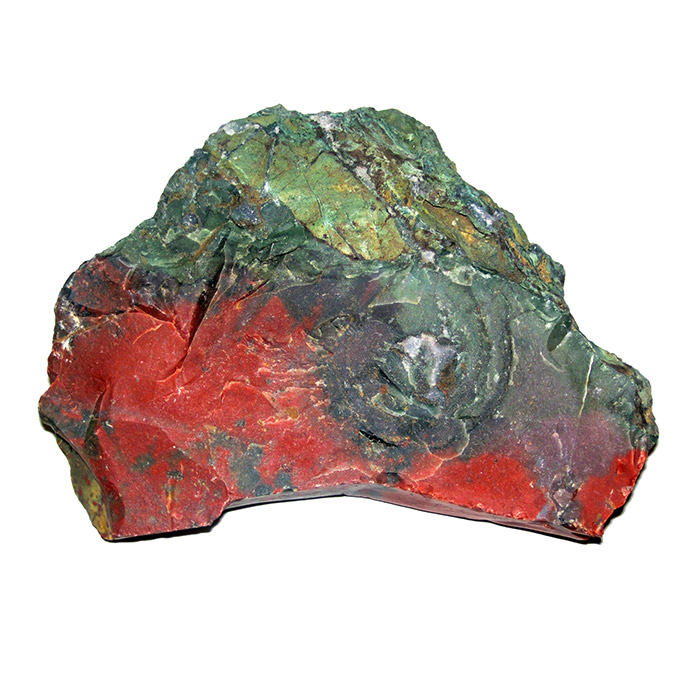 This popular lapidary material is opaque and takes on a high polish.  When used as a gemstone it tends to be cut as a cabochon.

The red spots present in bloodstone are caused by inclusions of iron oxides most likely in the form of hematite.

Historical Use of Bloodstone

Historically the mineral bloodstone was used as an amulet in the belief it could stop bleeding.  It was also believed to have mystical properties which included the ability to control the weather, banish evil and negativity and direct spiritual energies.  Bloodstone also known as heliotrope was used to protect against the evil eye and in certain circumstances was believed to render the wearer invisible.

"Heliotropium is found in Æthiopia, Africa, and Cyprus: it is of a leek-green colour, streaked with blood-red veins.  From the circumstance that, if placed in a vessel of water and exposed to the full light of the sun, it changes to a reflected colour like that of blood; this being the case with the stone of Æthiopia more particularly. Out of the water, too, it reflects the figure of the sun like a mirror, and it discovers eclipses of that luminary by showing the moon passing over its disk.

In the use of this stone, also, we have a most glaring illustration of the impudent effrontery of the adepts in magic, for they say that, if it is combined with the plant heliotropium, and certain incantations are then repeated over it, it will render the person invisible who carries it about him."

Heliotropium is a genus of flowering plant with similar colours to the mineral heliotrope.  The name came about because the flowers were understood to turn to face the sun.  The Greek word 'helios' means 'sun' whilst 'trepein' means 'to turn'.  The name heliotrope came about because the stone was believed to reflect light and for reasons unknown, was also believed to change colour after being submerged in water.

The deep red coloured inclusions were once likened to drops of blood hence legend says bloodstone was created at the foot of the cross during the crucifixion of Christ.  For this reason it has always been deemed to be appropriate to use for carving scenes of the crucifixion.

During the Middle Ages bloodstone was used for sculptures that depicted flogging, whipping, lashing and martyrdom.

An intaglio housed in the British Museum which dates back to the late 2nd or 3rd century is one of the earliest depictions of the crucifixion.  The stone which is described as a reddish brown jasper is believed to be bloodstone. 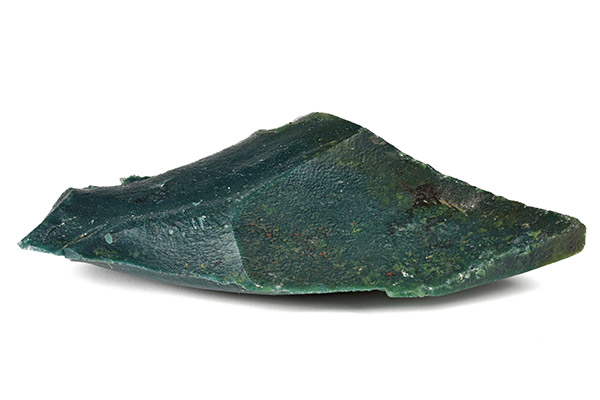 When used for its metaphysical properties bloodstone is still considered to be useful for matters relating to the blood and for strengthening the immune system. It's grounding and protective and can help keep undesirable influences out.  When carried as an amulet it offers strength and support whilst dealing with dangerous situations.

Associated with the base chakra, bloodstone is a powerful healing stone that protects against stress related to EMF (electromagnetic fields).  It's perfect for those who find it difficult to relax and who think about things for longer than they should.  Bloodstone improves focus and strengthens decision making. 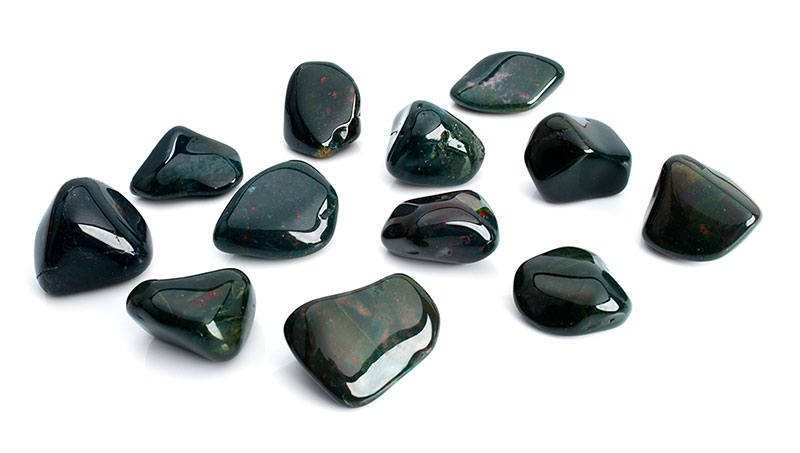 When heated the green in bloodstone turns grey and the red inclusions of iron oxide turn black.  For this reason the colour is always completely natural.

Mined predominantly in India, Australia, Siberia, Scotland, Brazil and the United States, bloodstone is one of the birthstones for March.  Aquamarine which is the blue variety of the mineral beryl can be used as an alternative.

Bloodstone which is quite hard grades 7 on Mohs scale of mineral hardness.  With that said, hardness in relation to minerals is not the same as toughness.

The photo at the top of our article is courtesy of James St. John - Flickr.  The bloodstone tumbled stones are from our own collection.