The mineral agate was highly valued by many ancient cultures including the Sumerians, Egyptians, Greeks and Romans.  It was widely used for talismans, seals, vessels (container used for liquids), beads and gemstones.

One of the oldest of all minerals, references to agate can be traced back more than 2000 years to the writings of the ancient Greek philosopher Theophrastus [c.370 - 285 BC].   The process of describing different varieties of agate can be found in his works Theophrastus On Stones in which he compares the hardness of agate to onyx and talks about how one variety differs from the other because of "its irregular and uncertain manner of spots, clouds and variegations".

He says although agates are predominantly grey, different colours can be present and are often beautifully spread out.  Patterns may resemble trees, shrubs, plants, clouds, rivers and even animals.  He says "the ancients" separated agate stones into different varieties giving each one a name that highlighted its difference from the "common agate".  That difference could be colour, markings or texture.

Red agates were known as haemachates the prefix 'haema' coming from the Greek word for blood with reference to its colour.   The name achates as agate was known at that time came from a river in Sicily where it was first discovered.

In reference to the discovery Theophrastus wrote; these stones have been "found to exist in almost every nation on Earth."  Those which featured patterns resembling trees and shrubs were called dendrachates (from the word dendrite) whilst other varieties were "idly named" according to the powers they held or because of their similarity to animal skin.

The Ancient Roman author, naturalist and natural philosopher Pliny the Elder [23 AD - 79 AD] also wrote about agate in his works "Naturalis Historia".  He frequently made reference to Theophrastus' work.

"Achates was a stone formerly in high esteem, but now held in none. It was first found in Sicily, near a river of that name; but has since been discovered in numerous other localities. In size it exceeds any other stones of this class, and the varieties of it are numerous, the name varying accordingly."

He goes on to name several different types of agate and the locations they can be found.  Like Theophrastus, Pliny also makes reference to dendrachates which he says is "marked with small shrubs".  Dendritic agate as it's known today is included with dendrites which are crystals with a branching form.  They often resemble plants or other types of organic matter.

Pliny talks about different types of agate from India and their distinctive markings.  He says "the sight of some is beneficial for the eyes whilst others when held in the mouth allay thirst.  Then there are those which are good for counteracting the effects of poison inflicted by the scorpion.  Agates can also be found in Cyprus."

He believed those with uniform colour would render athletes invincible and said agates with the highest value had the transparency of glass. 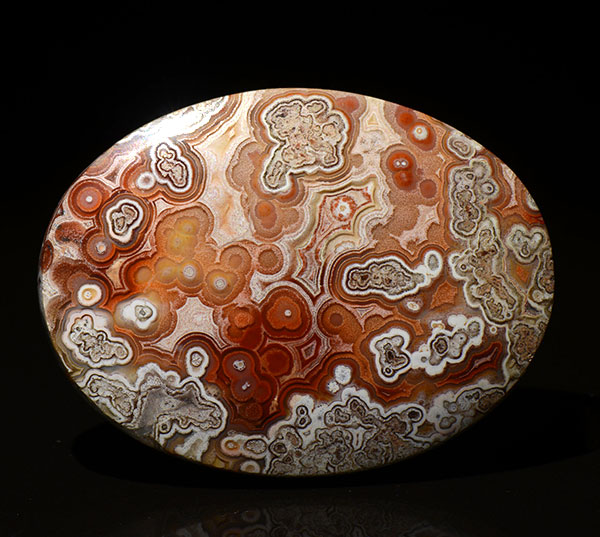 Agate is a translucent variety of the mineral chalcedony made up almost entirely of silicon dioxide.  Stones often occur in shades of black, white and grey but can also be exceptionally colourful.  Any colour and banding that's present is the result of trace impurities of other minerals.

The quartz crystals present in agate are colourless in their purest form but turn red or brown with the presence of iron, pink with manganese or dark green with chromium. Other geological factors including light and heat usually from radiation, also play a part in defining colour.

Some would argue that to be classified as a 'true' agate a stone must exhibit banding but there are several varieties which do not feature this characteristic. Over the years there have been endless discussions regarding the accuracy of trade names given to certain rocks and minerals.  From a geological perspective, many are likely to have been named incorrectly.  Names can be very misleading.

Moss and dendritic agate are two varieties that don't exhibit visible banding but feature inclusions known as dendrites. Often mistaken for organic matter, dendrites are crystal formations similar to those seen on glass during winter.  They're caused primarily by impurities of iron and manganese.

The word dendrite comes from Greek for 'tree' and refers to a 'branching form'.  Stones featuring dendritic inclusions can sometimes be mistaken for fossils. 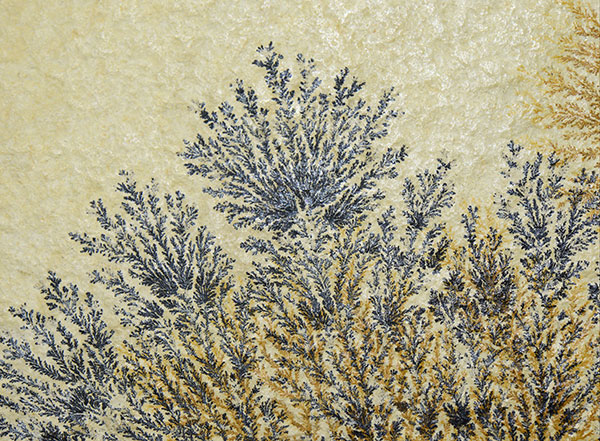 Although frequently found within igneous rocks, agate can also occur in other rock types as well.  Its formation begins when ground water containing silica (sand or quartz) that has entered the rock through holes, dries up leaving behind a residue of minerals. As the process repeats multiple layers of minerals build up within the rock following the outline of the cavity.  Once full the mass begins to crystallise.  Quartz crystals often grow in any space left unfilled and when their tips point towards a void, the structure is known as a geode.

The cavity containing the crystallised minerals is known as a nodule.  Depending on the type of rock it can be incredibly resilient to weathering and will often survive long after the host rock has eroded. The agate formation will remain securely locked away until the nodule is found and broken open.

On Mohs scale of mineral hardness agate grades 7.  Being relatively hard makes it relatively easy to work with. 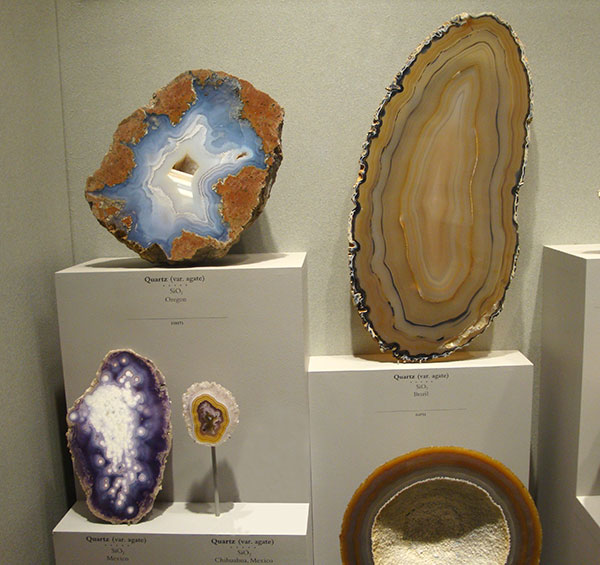 Although often characterised by concentric, curved or angular banding, agates can also exhibit other curious and intricate patterns.  Hundreds of varieties can be found around the world and many have their own unique names.  These often indicate the locality where they're found or a particular colour or characteristic.

Fortification agate is a generic name for stones whose bands are arranged at sharp angles.  The name stems from the shape which was once believed to resemble the lines of a fortress.  A fortification is a defensive wall or other reinforcement built to strengthen a building against attack.  Blue lace and crazy lace are both types of fortification agate.

Agatised dinosaur bone despite the name is not an agate at all.  The word 'agatised' is simply a description of the process that has taken place because the organic matter in the original cell structure of the dinosaur's bone was slowly replaced with agate. 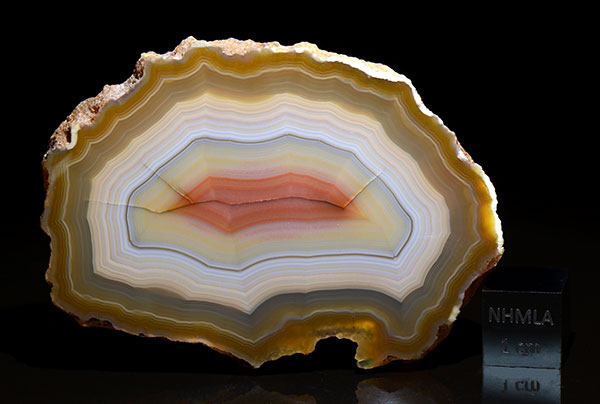 Agate is dependant on the presence of other minerals for its colour so also occurs naturally in black, white and grey.  These colours are often not considered to be sufficiently appealing to the wider commercial market so the stones are often dyed.  The practice of dying rocks and minerals can be traced back thousands of years. Agate has long been known to be porous with the ability to hold dyes particularly well.

Despite everything that has been learnt about the formation of agate there's still a great deal that's not fully understood. Its formation which is complex has never been studied from start to finish in real time.  Nor has it been possible to recreate agate in a laboratory setting.  For this reason much of what is known is supposition.

Agate is a grounding stone so will bring the emotional, physical and mental into balance.  Being grounded is important because it helps us remain calm, rational and make better decisions especially when surrounded by chaos.

Agate is soothing and calming and harmonizes positive and negative energies.  It works at its own pace but is powerful yet gentle.  Stones may be used to bring information to the surface that's deeply rooted in the subconscious and can help rebuild self-confidence.

Ideal for enhancing concentration, it can improve analytical ability and help find practical solutions to difficult situations.  It encourages the truth to be seen and spoken and helps deal with negativity and bitterness especially in relation to love.

The first three and the last photograph in this article are courtesy of Stan Celestian.  Clicking any image will redirect to the original non-compressed photo.