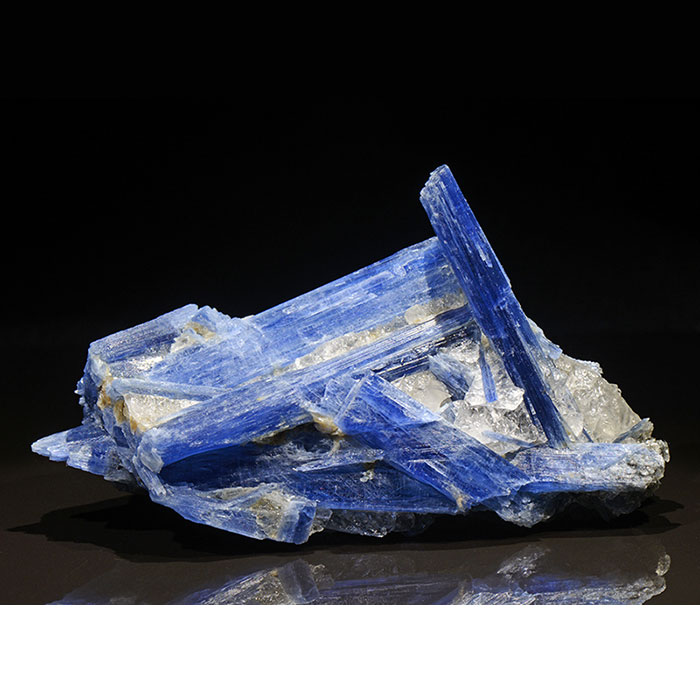 About the Mineral Kyanite

Kyanite is a natural stone that's not particularly common whose name comes from the Greek word 'kyanos' meaning 'blue'.  Despite being brittle this mineral is widely used in industry primarily because of its exceptional hardness but also because of its ability to tolerate heat.  When kyanite is heated it expands and in some cases can even double in size.

Kyanite is a translucent mineral with a vitreous lustre that's known for its zones of colour and variation in hardness.  Whilst most natural minerals have one hardness kyanite plus a few others have two.  Crystals tend to form as long narrow blades which grade 4 to 5 on Mohs scale when tested lengthways and 6 to 7 when tested across the width of the same crystal.  This characteristic along with crystals being brittle makes kyanite an extremely challenging stone to cut.

Being so fragile means kyanite is not ideal as a gemstone but is still used in selective items of jewellery.  Stones must be handled carefully because they can become damaged easily.  When used as a gemstone crystals tend to be faceted and can often have a 'scratchy' appearance and/or other minor surface marks.  The finest grade blue kyanite can rival the colour of a sapphire.

In the metaphysical world along with the mineral citrine, kyanite does not accumulate or retain negative energy so rarely needs to be cleansed.  It's a stone of tranquillity which stimulates communication and psychic awareness and has the ability to align the chakras.  It can help one to persevere in activities and situations which would usually reduce strength.  Kyanite can be used to balance yin and yang and dispel energy blockages.

Kyanite can be found in the United States, Brazil, Switzerland, Russia, Serbia, India and Kenya.  Fine gem quality blue kyanite crystals have also been mined in Nepal though exact quantities are unknown.

Both photos in this article are clickable and redirect to the original full size image.  The blue kyanite in our first photo is courtesy of Stan Celestian.

Our Collection of Blue Kyanite