An Introduction to Malachite

Malachite is a distinctive green coloured stone and the oldest ore of copper. This naturally occurring mineral occurs quite close to the surface of the earth and its presence usually indicates deeper deposits of native copper are close by.  An ore is a rock which contains a significant amount of a natural mineral with valuable elements that can be extracted.  The extraction process which is quite simple is carried out by heating the stone in conjunction with carbon at a relatively low temperature over a short period of time.

Malachite occurs alongside or close to the mineral azurite and the chemical formula for both is almost identical. The reason one is green and the other blue is because the copper present in malachite is more highly oxidized than it is in azurite hence over time and under the right conditions, one turns into the other.  Both minerals are produced through the weathering of copper ore deposits.

Although the use of malachite can be traced back to 8000 BC the stone didn't start being used as an ore until 5000 BC.  Until then copper which was the only metal known to man would have come from deposits of native copper.  Malachite was subsequently used as an ore throughout antiquity.  The Ancient Egyptians had mining operations in place in the Sinai Peninsula in 4000 BC and the area was Egypt's main source of copper for hundreds of years.

Many ancient civilizations used malachite for lapidary purposes and it's also believed to have been the first green pigment which led to it being used as a colouring agent in glazes, glass and cosmetics. In China green pigment can be traced back as far as the Shāng people (c.1500 BC) and a malachite tiger found in the tomb of a King's consort was dated to around the same time. In Western China the colour green can be found in many paintings from the ninth and tenth centuries but it didn't start becoming popular in Europe until around the 14th century. When used as a pigment malachite must be ground coarsely because the smaller the particles the paler the colour. 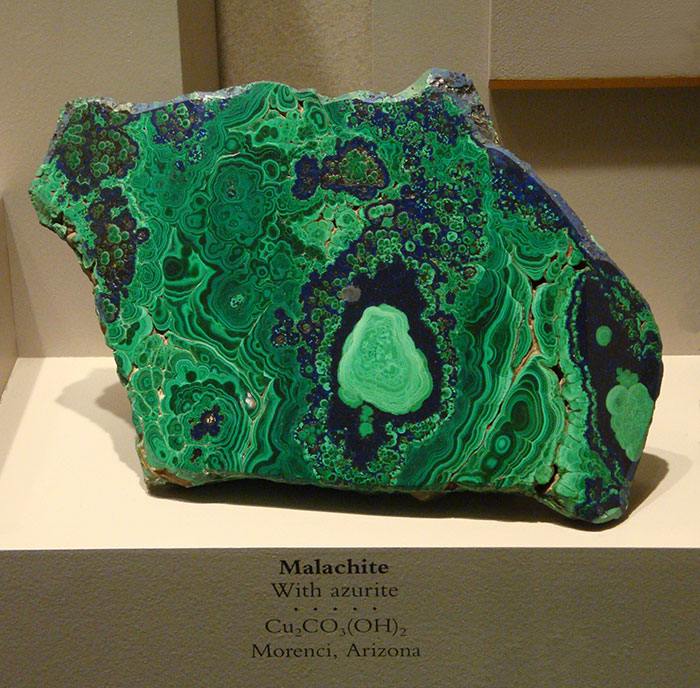 Malachite beads found along the Euphrates River have been dated to 7000 BC but in Ancient Egyptian tomb paintings the colour green didn't start appearing until around 2613 BC. The Pharaoh Amenhotep III used over five hundred kilos of mafek for inlay work in the Temple of Karnak.  Mafek was a collective name for a variety of green stones one of which was likely to have been malachite. Sorting objects into groups is an instinctive human characteristic and for thousands of years rocks and minerals were grouped according to their colour and visible characteristics. Records from the earliest system show just two groups, "stones" and "earths" and different rocks and minerals were put in to one or the other depending on how they reacted to fire and water. In the writings of Theophrastus Ancient Greek philosopher, all bright green coloured copper minerals were labelled as chrysocolla but Pliny the Elder Roman author and naturalist later suggested the name was more of a reference to malachite and may not have included the mineral known today as chrysocolla.

In his works Naturalis Historia Pliny also refers to a group of green coloured stones as being different varieties of smaragdus the ancient name for emerald but many had little in common. The group is believed to have included malachite along with types of sapphire, turquoise, jasper and possibly even glass. He also wrote "copper smaragdus" from Cyprus is associated with the colour blue which seems to be a reference to the mineral azurite.

In the early 1800's two enormous deposits of malachite were discovered in Russia with enough material to supply the entire country with copper for around one hundred and seventy years. Many large slabs were polished for ornamental purposes and it quickly became the stone of choice for the rich and famous. Several important buildings are adorned with malachite the most important being the Malachite Room at the Winter Palace in St Petersburg which features over two hundred tons of this green mineral.  Saint Isaac's Cathedral in St. Petersburg which was built over a period of forty years starting in 1818 features marble, granite, lapis lazuli and eight massive malachite pillars. 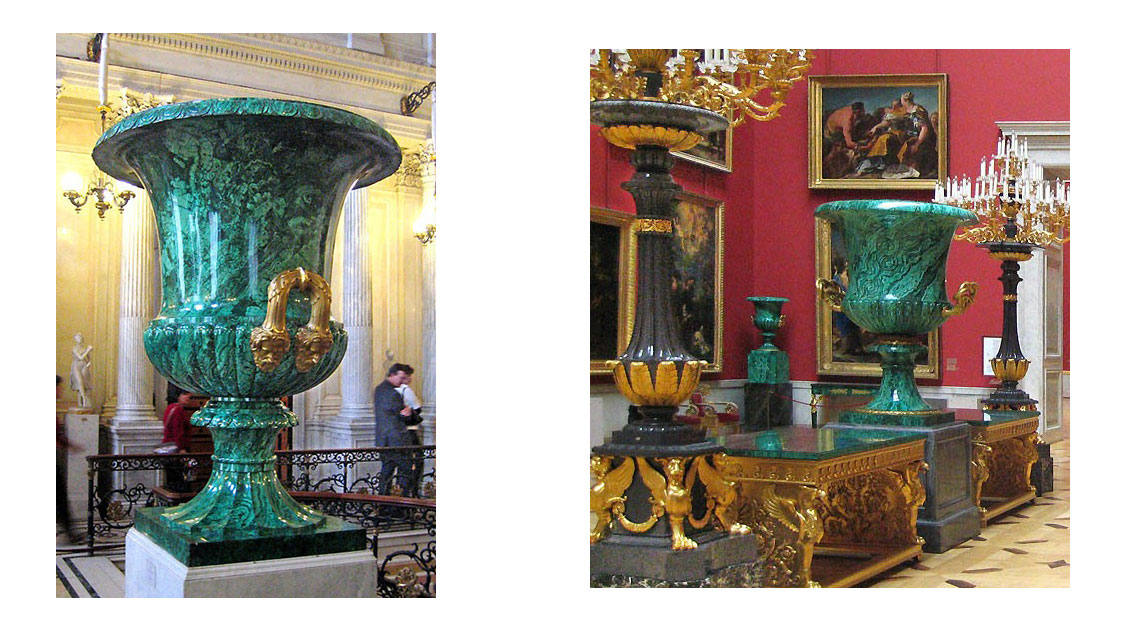 On Mohs scale of mineral hardness malachite grades just 3½ to 4 and as well as being a soft stone, it's also porous so must be protected from moisture.  Sudden exposure to heat can affect its colour or cause the stone to crack yet despite its fragility, it has always been an extremely popular lapidary material.  The dust from malachite is highly toxic so protective breathing equipment must always be worn whilst cutting and polishing and it's a good idea to wash your hands after touching a very dusty specimen.  Rough and polished malachite is generally considered to be very safe to handle and providing you don't use your finger to repeatedly wet a rough stone to bring out the colour or put malachite in your mouth, it's extremely safe and poses no risk at all to health.

Malachite tumbled stones are popular for use in crystal healing but due to the mineral's toxicity it needs to be handled carefully.  An elixir is water that has been infused with certain crystals in order to extract their energy or healing properties and may be used as a homeopathic remedy and are often consumed. Malachite should never be used as an elixir.

Our Collection of Malachite