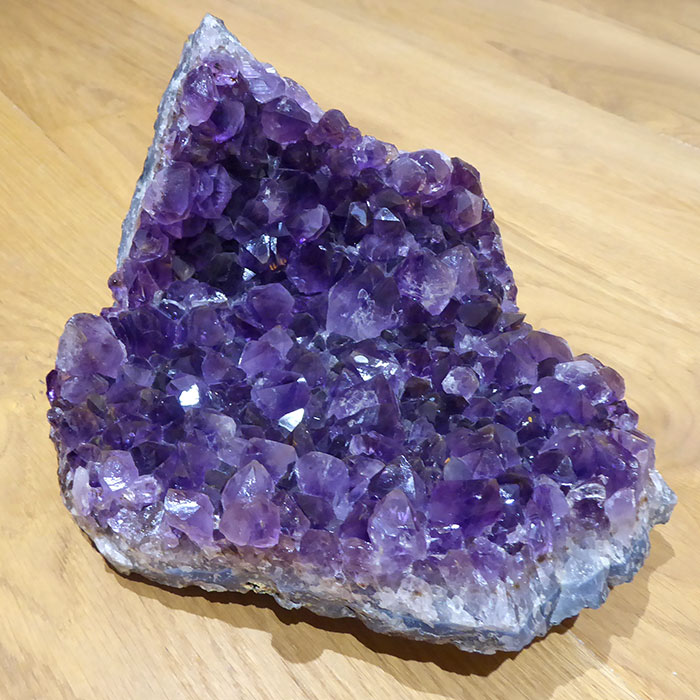 Amethyst | Facts About the Colour Purple

Birthstone for the Month of February

Amethyst which is the birthstone for the month of February can be found in several countries around the world but some of the finest grade crystals come from Africa and South America.  The purple variety of the mineral quartz, amethyst is hugely popular as a lapidary material, widely used in alternative therapies such as crystal healing and geodes of all sizes are keenly sought after by collectors and mineral enthusiasts around the world.  According to research purple is the colour most often associated with magic, royalty and piety.  When used as a gemstone crystals can either be faceted or shaped as a cabochon.

Shades of colour in the mineral amethyst can vary widely within the same crystal and this trait is correctly known as colour zoning.  Although different shades of purple are quite common, chevron amethyst is the most extreme example and stones often exhibit large sections of white quartz.  The name chevron amethyst or banded amethyst as it's generally known as in the UK stems from the prominent chevron-like or v-shaped patterns.  Some chevron amethyst crystals can resemble Derbyshire Blue John which is a rare variety of fluorite.

On Mohs scale of mineral hardness most varieties of quartz grade 7 so it's relatively hard which makes it quite easy to work with. 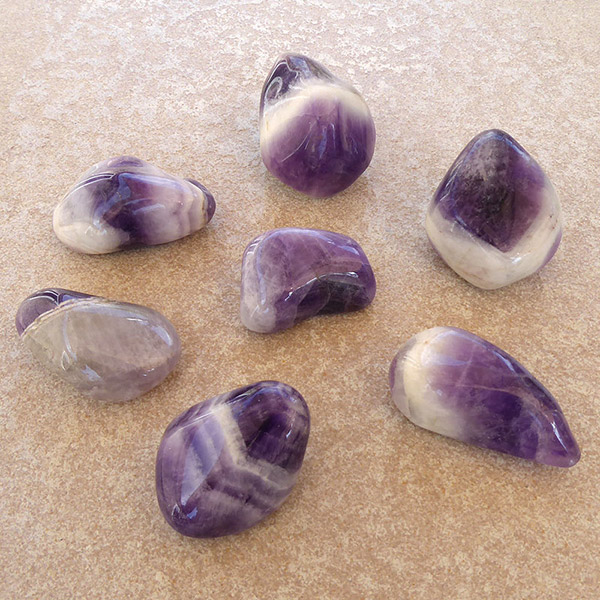 The Unmistakable Colour of Amethyst

The colour of amethyst crystals can vary significantly from the deepest shade of purple to subtle violet but will fade if exposed to bright sunlight for long periods of time.  Whilst iron is the primary cause of the stone's colour, the intensity and exact shade is determined by impurities of manganese.  Other contributing factors can include heat, irradiation and/or pressure but natural minerals are formed through different geological processes and should one change or be absent, the outcome may well be the formation of a different mineral.

Exposure to heat causes a gradual reduction in the amount of iron that's present which leads to a change in colour.  By disrupting a mineral's chemical makeup it's possible to adjust or change the colour of a stone completely.  Heat treatments mimic natural geological processes and can be used to remove unwanted tinges of colour or to lighten or darken the shade of many but not all natural stones.  Much of the world's commercial grade citrine is produced by heating amethyst because being a relatively rare mineral it's also expensive.  When heated to around 450°C (842°F) amethyst crystals turn yellow and with an increase in temperature they turn orange and then orange-brown.  The final colour is determined not only by temperature but also by the length of time the quartz is heated.

Ametrine which is a combination of purple and yellow quartz is also very rare and most of the world's supply comes from one mine in Bolivia.  Smaller amounts of this mineral can also been found in India and Brazil.  With it being so rare the vast majority of ametrine is produced artificially.  Prasiolite which is a green variety of quartz is another rare mineral so is also produced by heating amethyst.  It's sometimes referred to as green amethyst which is inaccurate and a misnomer because amethyst is the geological name for the purple variety of quartz. 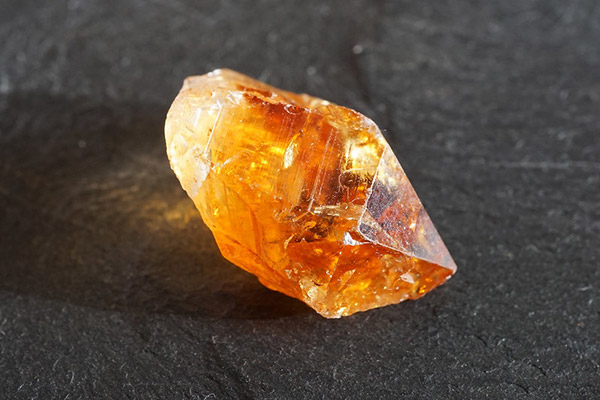 The History of Amethyst

Enhancing or changing the colour of crystals rocks and minerals is almost as old as the gem trade itself. Theophrastus the Ancient Greek philosopher [c.370-285 BC] documented in his treatise Theophrastus On Stones, "amethyst loses its colour in the fire like the sapphire and emerald" and the Ancient Roman author, naturalist and philosopher Pliny the Elder [23-79 AD] wrote about "giving quartz the colour of emeralds" and "how to change one gemstone into another".

The earliest reference to amethyst can be traced back over 5000 years to 3100 BC and crystals are known to have been popular and highly sought after in Ancient Egypt. Theophrastus remarked on its colour being similar to wine and that along with rock crystal it can be found by "dividing other stones".  He says both are often found in veins, cavities or lining the interior of geodes and are only revealed when rocks are broken open. The first English translation of the History of Stones (Theophrastus On Stones) by the author and botanist John Hill was published in 1746.  In one of his footnotes he says;

"Although the ancients" knew of five species of amethyst, we have at least as many among the jewellers at present, though they are not at the pains to distinguish them by particular names, they divide them in general into Οriental and Occidental. The former are very fierce but of great hardness, lustre and beauty, the latter are had from many places particularly Saxony, Germany and Βοhemia". 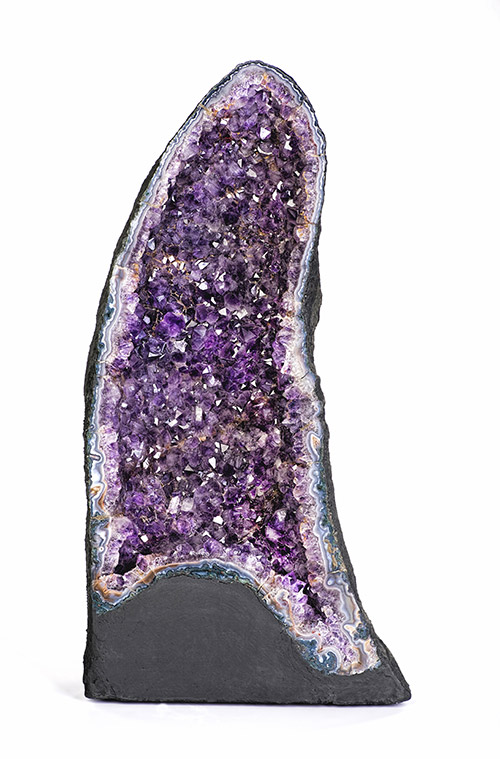 It's believed that in the past translucent gemstones of a similar colour were grouped together so amethyst would have been placed with the minerals fluorite, corundum (blue corundum is sapphire red corundum is ruby) and possibly even tourmaline. Oriental amethyst was a reference to stones from the east and "occidental" means "relating to the west".

Later writers like Pliny also compare the stone's colour to wine and in his works Naturalis Historia (Natural History) he writes,

"We will now commence with another class of precious stones, those of a purple colour or whose tints are derived from purple. To the first rank belongs the amethystos".

He goes on to say;

"All of these stones are transparent and of an agreeable violet colour and easy to engrave, those of India have in perfection the very richest shades of purple and it is to attain this colour that the dyers in purple direct all their endeavours"

From here detail becomes a little sketchy so historians are reliant on various translations of the original text to try and work out which stones Pliny is referring to.  Corundum would not have been easy to engrave because of its hardness so it's generally believed it was not included in the rank of amethystos.  This is supported by Pliny's descriptions of this group of stones in which he says, "they have a fine mellowed appearance to the eye and not dazzling the sight like the colours of the carbunculas."  Carbunculus is known today as garnet.  He continues, "the colour of one is almost hyacinth whilst another borders on crystal with the purple gradually passing off into white".  He says it has little value because when viewed sideways and held up to the light, fine amethyst (a reference to corundum or blue sapphire) should always have a purple brilliance like that of the carbunculus (garnet) "slightly inclining to a tint of rose".

He says the name amethystos according to "some authorities" comes from the Ancient Greek words for "not" and "to intoxicate" on account that it's "a supposed preservative against inebriety".  It's believed with this statement that Pliny is not referring solely to the rank of stones known as amethystos but to the entire class of stones which are purple or whose tints are derived from purple which includes corundum, fluorite and possibly garnet amongst others.

In another paragraph he talks about how amber is used to counterfeit certain gemstones and says,

"Amber too is greatly in request for the imitation of the transparent precious stones, amethystos in particular for as already stated, it admits of being dyed of every colour" 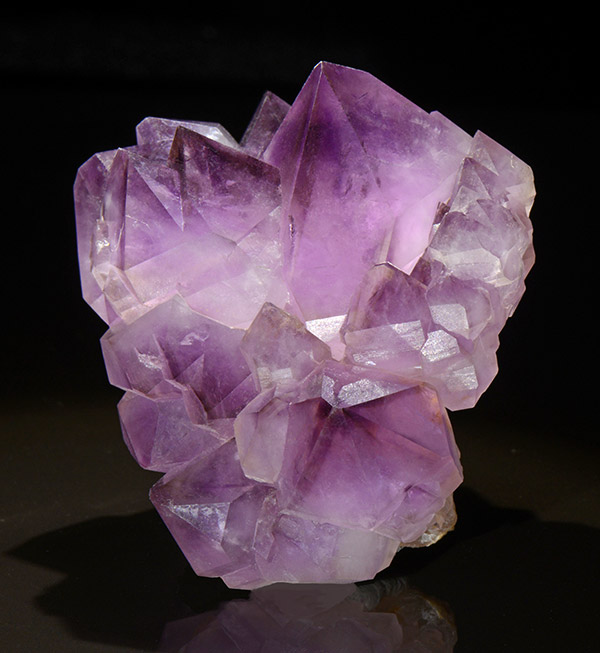 In 1846 John Kitto published an encyclopaedia called "A Cyclopaedia of Biblical Literature" in which he talks about how Ancient Egyptians counterfeited precious stones. He writes that glass was known and made by these "ingenious people at a very early period."  Glass ornaments were made about 1500 years B.C and glass vases were used for holding wine as early as the Exodus. He says "such was the skill of the Egyptians in this manufacture that they successfully counterfeited amethyst and many other precious stones."  The following paragraph demonstrates how the use of the word amethyst in ancient writings did not just refer to the purple variety of quartz;

"The transparent gems to which this name is applied are of a colour which seems composed of a strong blue and deep red and according as either of these prevails, exhibit different tinges of purple sometimes approaching to violet and sometimes declining even to a rose colour. From these differences of colour the ancients distinguished five species of amethyst, modern collections afford at least as many varieties but they are all comprehended under two species, the oriental amethyst and the occidental amethyst. These names, however are given to stones of essentially different natures which were no doubt, anciently confounded in the same manner. The oriental amethyst is very scarce and of great hardness, lustre and beauty. It is in fact a rare variety of the adamantine spar or corundum. Next to diamond it is the hardest substance known. To this species also belongs the sapphire, the most valuable of gems next to the diamond and of which the oriental amethyst is merely a violet variety. Like other sapphires it loses its colour in the fire. The more common or occidental amethyst is a variety of quartz or rock crystal and is found in various forms in many parts of the world as India, Siberia, Sweden, Germany, Spain and even in England very beautiful specimens of tolerable hardness have been discovered. This also loses its colour in the fire. Amethysts were much used by the ancients for rings and cameos and the reason given by Pliny, was because they were easily cut." 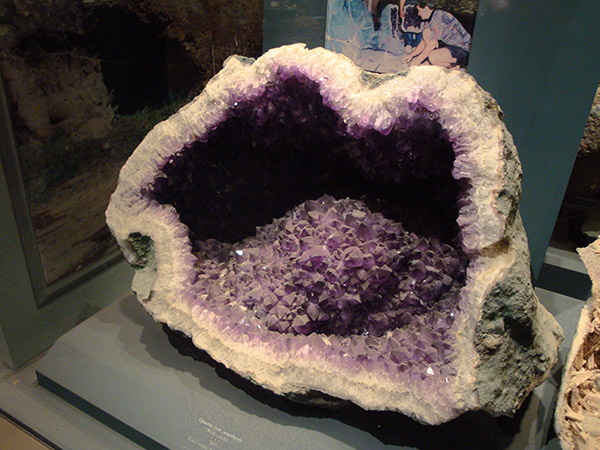 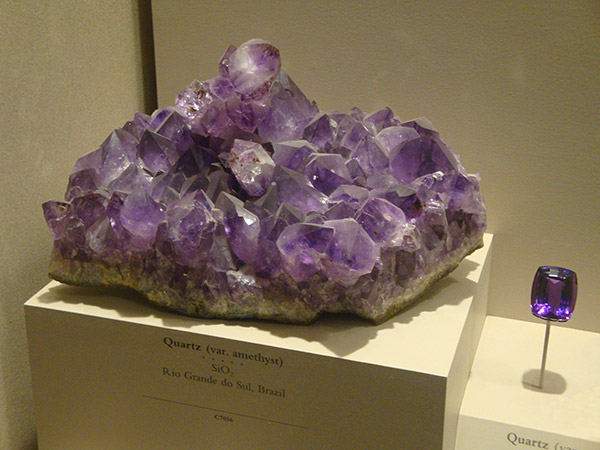 In biblical times amethyst is believed to have been the third stone in the third row of the high priest breastplate.  This religious garment was worn by the Jewish high priest when presenting himself to God and was adorned with twelve precious gemstones.  Each one had the name of one of the twelve tribes of Israel inscribed on one side.

In the Middle Ages amethyst was believed to encourage celibacy and symbolise piety (dutiful devotion to God and observance of religious principles) hence was a favourite of the church.  More recently it can be seen in the Royal Sceptre which is part of the British Crown Jewels.  The sceptre is crafted entirely from gold and features a huge amethyst mounted below a diamond encrusted cross with an emerald in the centre. It also features the Cullinan I which is the world's largest clear cut diamond.

Countless articles that have been written about amethyst over the years make reference to a tale from Greek mythology which explains how the name came about.  Despite extensive research we have never been able to find any hard evidence to support its existence.  The only known reference to amethyst in Greek mythology relates to a stone that was given to Dionysus (Greek God of wine) by the titan Rhea in order to preserve the wine-drinker's sanity.

In 1576 however which is many years after the fall of Ancient Greece, a book of poems was published that had been written by the French poet Remy Belleau and one bore a striking resemblance to this apparent Greek myth. Published less than ten months before his death, there is nothing to suggest it was based on original text from Greek mythology. Bacchus is the name adopted by the Romans for Dionysus the Greek God of wine.

"Bacchus was pursuing a maiden named Amethyste who refused his affections. Amethyste prayed to the gods to remain chaste, a prayer which the goddess Diana answered, transforming her into a white stone. Humbled by Amethyste's desire to remain chaste, Bacchus poured wine over the stone as an offering, dyeing the crystals purple"

In recent years many different versions of the myth have appeared and each time the person writing the article claims incorrectly, that it comes from Greek mythology.

The photos in this article are all clickable and redirect to the original full size image.

Our Collection of Amethyst