Aventurine is a translucent variety of the mineral quartz which can usually be identified by the presence of platy inclusions. Platy is a term that's used to describe individual crystals which are small and flat like a plate and often have a flaky appearance.  Mineral inclusions referred to as platy usually tend to be mica or hematite (the mineral form of iron oxide).

As light interacts with the platy inclusions within aventurine a glistening or spangled effect can usually be seen.  The phenomenon is known as aventurescence and is caused by the sparkling of internal reflections from microscopic inclusions of other minerals.  Although aventurine which is also known as aventurine quartz occurs in several different colours, green, blue and orange are the most common.  Green is caused by inclusions of fuchsite (pronounced fook~site), brown is caused by the presence of iron pyrite also known as fool's gold, hematite and/or goethite (pronounced ger~tite) cause aventurine to turn pink or orange and blue aventurine is caused in part by the mineral muscovite which is a type of mica.

In order for aventurine to change colour the mineral inclusions must be present in great abundance and for this reason, some argue that aventurine should actually be referred to as a rock instead of a mineral.

Aventurine is believed to have been named after aventurine glass otherwise known as goldstone which is a man-made material that originated hundreds of years ago in Venice but not by glass making monks as some have been led to believe.  Goldstone just like aventurine exhibits a spangly or glitter-like effect as it interacts with light but unlike aventurine, sunstone and several other natural minerals the aventurescence is the result of light reflecting off tiny specs of copper which have purposefully been embedded within the glass hence the name aventurine glass.

Most of the world's supply of green and blue aventurine comes from India, the off-white, grey and yellow to orange coloured stones come from Chile, Spain and Russia and other varieties can be found in Brazil, Austria and Tanzania.  Taganai Stone river in the Southern Urals of Russia is reported to be the world's largest deposit of aventurine. 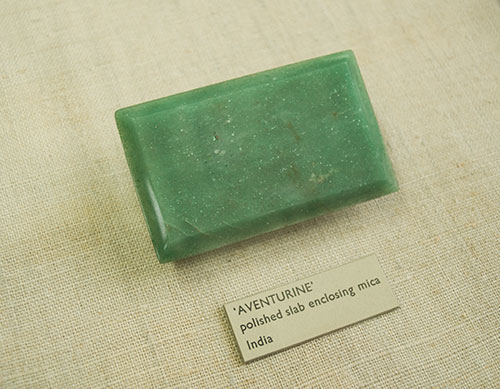 In crystal healing aventurine is said to protect the heart chakra and helps balance male and female energies.  It can reinforce decisiveness and strengthen leadership qualities.

Aventurine is graded 6½ to 7 on Mohs scale of mineral hardness.