Light weight mother of pearl pendant crafted in a slightly chunkier sterling silver setting which is the very reason why this piece has been reduced.  Having chosen the thin slice of mother of pearl it should have been mounted in a much slimmer setting but things didn't quite turn out as planned.

Mother of pearl also known as nacre (pronounced nay~ker) is made up primarily of the mineral aragonite and small amounts of a horn-like organic substance known as conchiolin. It's produced by oysters and some molluscs and is best known as the lining of some sea-shells.  Fascinatingly iridescent this light weight material has been used for thousands of years and before the introduction of plastic was used to make buttons.  Durin the early 1900's the U.S state of Illinois was exporting billons of tons of mother of pearl buttons around the world.

Although mother of pearl is classified as a gemstone it's actually a organic.  Other examples of organic materials classified as gemstones include pearl, bone, amber, coral and jet. 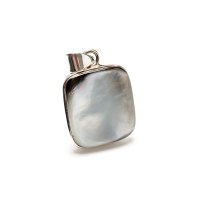 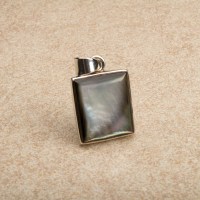