Gemstones come from rocks and minerals but not all rocks and minerals produce gemstones. The main attributes for a gemstone are colour, durability, beauty and rarity and generally speaking stones that exhibit some degree of translucency tend to command a higher price than those which are opaque.

For most people beauty matters more than anything else but the characteristics that cause a gemstone to be beautiful can change from one variety to the next. Emerald, turquoise and amethyst are highly sought after for their tantalizing colour whilst diamonds are prized for their lack of colour.  The finest aquamarine and topaz should ideally be free from inclusions yet certain varieties of included quartz such as rutilated quartz and tourmalinated quartz are highly sought after specifically because of their inclusions. Fascinating optical phenomenon such as chatoyance and play of colour may also be the reason why a gemstone is considered to be beautiful but these characteristics would not exist without the presence of light. 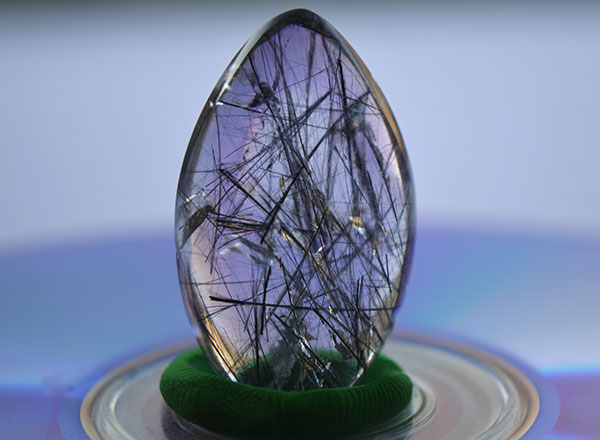 Inclusions of black rutile in quartz

Without light there would also be no colour because we can only see colour because of the way that light interacts with a particular object.  Our eyes and brain then work together to translate that into the colours we see.  Objects only appear to be colorful when light which is energy hits them but as it fades, so does the colour and our eyes then only see black and grey.

Many different characteristics contribute to the colours that are present in gemstones and whilst in some it's always the same characteristic, in others it's different according to the constituents that are present or the way the gemstone interacts with light.  Malachite is green because of the presence of copper, inclusions of hematite in jasper cause a deep red colour and the 'play of colour' seen in opals is caused by the scattering of light on the surface of the stone.

The largest group of gemstones are those which are mostly colourless in their purest form and exhibit a high degree of translucency. The tiniest change in the crystal structure or the presence of a structural imperfection will in most cases instigate a change of colour. When iron and titanium replace aluminium in the mineral corundum it turns blue and when cut as a gemstone, it becomes known as sapphire.  The presence of iron alone turns corundum yellow (yellow sapphire) and with the addition of chromium it turns red.  Only red corundum is entitled to be called ruby.  In its purest form the mineral beryl is colourless but traces of other minerals and/or elements transform it into various shades of red, green, yellow and blue. Green beryl is known as emerald whilst blue is aquamarine.  Other contributing factors responsible for colour change in a gemstone include heat, the orientation of the crystals and any damage or anomalies that may have occurred during its formation.

The optical phenomenon that can be seen in some gemstones is caused by small or microscopic features. For example transparent parallel layers of substances present in nacre also known as Mother of Pearl cause the shell to be iridescent and give it a pearlesque lustre.  A band of light that reflects off the fibrous structure in the gemstone tigers eye causes chatoyancy whilst asterism which can sometimes be seen in rubies and sapphires is caused by needle-like inclusions of the mineral rutile.  The effect that can be seen with the reflectance of light in labradorite and moonstone is correctly known as known as schiller and the finest grade stones can exhibit a fascinating flash of blue or green colour as they catch the light from certain angles.

Schiller or adularescence in labradorite

Durability is another factor that determines the suitability of a rock or mineral to be classified as a gemstone and it's comprised of three parts, hardness, toughness and stability. Hardness relates to scratch resistance meaning how easily a gemstone can be scratched by another and Mohs scale of mineral hardness is widely used for this purpose. Toughness relates to a gemstone's resistance to cracking, chipping or breaking and also affects how easy it is to facet. Whilst diamond may be the hardest stone on Mohs scale of mineral hardness it's certainly not the toughest.  Diamond grades 10 whilst Nephrite Jade grades 6 to 6.5 yet is considerably tougher because of its strong, interlocking network of fibrous crystals.  Pearl grades just 3 on the scale yet is actually extremely tough and if dropped is unlikely to break.  Stability refers to a gemstone's resistance to damage through chemicals or a change in structure caused by 'deteriorating forces'.  Taking turquoise and malachite as an example, both gemstones can be damaged by moisture or oils from the skin because they're porous.  Another example is amethyst which is prone to fading if exposed to bright sunlight.

Colour plays an important part in determining the price of a gemstone and a fine specimen must exhibit good depth of colour without being too pale or too dark and it needs to be uniform throughout the stone. Clarity is also important but may not always be as relevant depending on the type of stone.  Aquamarine for example should be almost completely transparent and void of inclusions yet it's extremely rare to find a flawless emerald. The term "flawless" is used to describe a gemstone that boasts complete transparency and is free from inclusions, cracks and anomalies.  In many cases weight and size are also taken into account however where large crystals are in abundance such as in the minerals quartz and topaz, the price increase is less in gemstones that are larger or heavier.

Gemstones are either polished as a cabochon or have facets cut into them and the purpose of both practices is to maximise beauty. The term cabochon describes a gemstone that has been polished to produce a smooth, rounded upper surface and has a flat base and the technique is used mainly on rocks and minerals that are opaque or translucent. This finish helps show off surface colour and markings as well as other characteristics such as chatoyancy, schiller, asterism and play of colour. Gemstones which are highly translucent or transparent tend to be faceted which involves cutting a series of flat reflective faces called facets into the surface of the stone. By doing that it dramatically enhances the gemstone's ability to reflect light which subsequently improves colour, sparkle and brilliance hence making it considerably more beautiful which in turn increases value.